German History in Documents and Images 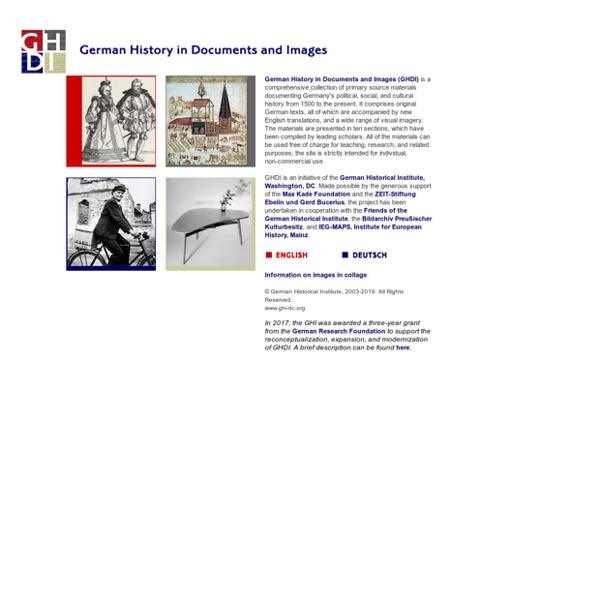 German History in Documents and Images (GHDI) is a comprehensive collection of primary source materials documenting Germany's political, social, and cultural history from 1500 to the present. It comprises original German texts, all of which are accompanied by new English translations, and a wide range of visual imagery. The materials are presented in ten sections, which have been compiled by leading scholars. All of the materials can be used free of charge for teaching, research, and related purposes; the site is strictly intended for individual, non-commercial use. GHDI is an initiative of the German Historical Institute, Washington, DC. Made possible by the generous support of the Max Kade Foundation and the ZEIT-Stiftung Ebelin und Gerd Bucerius, the project has been undertaken in cooperation with the Friends of the German Historical Institute, the Bildarchiv Preußischer Kulturbesitz, and IEG-MAPS, Institute for European History, Mainz.

Photographs Interpreting a visual source, like a photograph, is very different to interpreting words on a page, which is the case with written sources. Therefore, you need to develop a different set of skills. Photographs are very useful types of primary sources. They provide a rare glimpse of a particular second in time, which will never again be repeated. The Medieval Masterpiece, the Book of Kells, Is Now Digitized & Put Online If you know nothing else about medieval European illuminated manuscripts, you surely know the Book of Kells. “One of Ireland’s greatest cultural treasures” comments Medievalists.net, “it is set apart from other manuscripts of the same period by the quality of its artwork and the sheer number of illustrations that run throughout the 680 pages of the book.” The work not only attracts scholars, but almost a million visitors to Dublin every year.

Political Cartoons Interpreting a visual source, like a political cartoon, is very different to interpreting words on a page, which is the case with written sources. Therefore, you need to develop a different set of skills. Political cartoons are ink drawings created to provide a humorous or critical opinion about political events at the time of its creation. They were particularly popular in newspapers and magazines during the late 19th and early 20th centuries. Prelinger Archives : Free Movies : Free Download, Borrow and Streaming by Castle Films movies eye Use of Propaganda in WWI Postcards – Europeana Blog Millions of postcards circulated during the First World War and influenced public opinion. It is not surprising that something as ordinary as a postcard was used by governments on all sides to either defend their own actions, to discredit the enemy and to rouse the masses to support their nation. Within just three days of the declaration of war on 1 August 1914, publishers had war-themed postcards on sale. Their powerful images had an unprecedented impact on the masses: The postcard became a weapon of propaganda. During WWI, propaganda became, for the first time, the responsibility of government agencies like the Ministry of Information in Great Britain.

Guide to the classics: Homer’s Iliad - History of the Ancient World By Chris Mackie Homer’s Iliad is usually thought of as the first work of European literature, and many would say, the greatest. It tells part of the saga of the city of Troy and the war that took place there. In fact the Iliad takes its name from “Ilios”, an ancient Greek word for “Troy”, situated in what is Turkey today. Hitler as a Spider: 10 Propaganda Maps That Personify 20th Century Conflicts A new exhibition showcases historic maps that summarized international conflict by depicting different world powers as people and animals. War Map, an exhibit at London’s Map House, explores the satirical ways propagandists and mapmakers have sought to explain international conflicts in the 20th century, from making Hitler into a spider to showing Winston Churchill and Franklin Delano Roosevelt playing tug-of-war with Africa. The maps (which we spotted from The Economist’s 1843 magazine) will be on display in London until November 18, and an accompanying coffee table book is available now.

These Photos of Pompeii Show Slice of Ancient Roman Life that Was Buried Under 20 Feet of Ash - History Daily Sep 172016 On August 24, 79 AD, Mount Vesuvius, a 4,000-foot volcano near the Bay of Naples in Italy, erupted, burrying the city of Pompeii under an almost 20-foot blanket of volcanic ash and killing 2,000 people. It was one of the world’s most famous and deadly volcanic eruptions. The ancient Roman city was left untouched until explorers rediscovered it in 1748, finding that Pompeii was virtually intact underneath the dust and dirt. As a resort for Rome’s rich, elegant villas lined wide, paved streets. Some of these villas have been restored and are open to visitors, like the Casa del Fauno and Casa del Menandro.

The Great Exhibition The Great Exhibition, housed within the ‘Crystal Palace’, embodied Prince Albert’s vision to display the wonders of industry from around the world. Liza Picard looks at the exhibits, the building and the ideas behind the project. The Crystal Palace If you took an omnibus along London's Knightsbridge in the summer of 1851, you would see an astonishing sight. The Educated Teacher Last year my co-teacher and I were a little crunched for time when teaching the interwar years in Europe. We wanted to get across the economic and social problems that Europeans faced and how it influenced the choices they made, so I designed these learning stations to allow students to use primary and secondary sources to discover these facts for themselves. We set up the classroom with the documents (printed from the PowerPoint, attached below) for each station taped to the walls around the room in clusters.

Creative Warm-Up: the Industrial Revolution After a few days of studying the Industrial Revolution, I gave students a warm-up activity to get them using primary sources creatively and putting themselves into that time period. In this activity, students were given a sheet containing two primary sources. There were several different sheets, and students could trade with their neighbors if they didn’t like the one they received. They contained photographs, quotes or maps from the period.