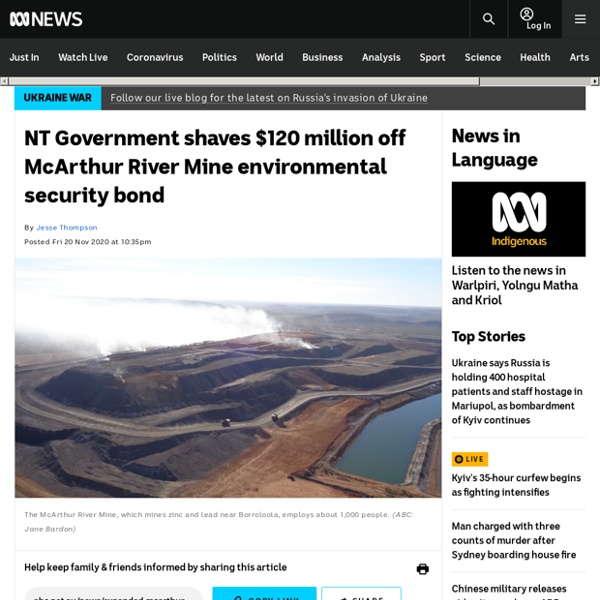 The NT Government has quietly reduced the environmental rehabilitation bond for a major Top End mine by more than $100 million after controversially approving a significant expansion of the site. Key points: The McArthur River Mine's environmental security bond was reduced by $120 millionThe Environment Centre NT says taxpayers could become liable for environmental damageA proposal to double the size of the zinc and lead mine was approved on Thursday Glencore's McArthur River Mine, a lead and zinc mine near Borroloola in the Gulf of Carpentaria, now has a security bond of about $400 million instead of $520 million. Mining and Industry Minister Nicole Manison announced approval for a doubling of the size of the project's mine pit and waste rock dump earlier this week. Security bonds are a risk-based payment made to the NT Government to cover any costs of dealing with mining-related environmental harm. Mine expansion could be invalid: ECNT She did not specify whether that plan had been costed.

How 'agromining' — farming plants that contain metal — could help power the future When scientist Alan Baker made a cut in the side of an exotic plant in the Philippines jungle, the sap that bled out had a jade-green glow. The shrub was a newly discovered species, soon to be known as Phyllanthus Balgooyi, one of a rare variety of plants that naturally suck high amounts of metallic elements from the soil. The fluorescent sap turned out to be nine per cent nickel. It was a welcome finding, but not a surprise, as Professor Baker's research into so-called "hyperaccumulators" had already uncovered species that seemed to thrive on everything from cobalt to zinc, and even gold. "These are plants which can take up elements from the soil [at rates] orders of magnitude higher than normal plants," Professor Baker says.

Nine US officials including Michigan ex-governor charged over Flint water crisis deaths Nine US officials — including former Michigan governor Rick Snyder and key members of his administration — have been charged following a new investigation into the Flint water disaster that contaminated the US city with lead and left 12 people dead. Key points: A lengthy criminal investigation ran parallel to civil litigation over the health crisisIt's alleged Flint residents who became sick from the water were failed by 'all levels of government' Officials face a variety of charges including manslaughter, misconduct and perjury Torquay is having a property boom, but the Karaaf Wetlands on Victoria's Surf Coast is under threat To the untrained eye, the Karaaf Wetlands on Victoria's Surf Coast looks like an untouched oasis. It's home to kangaroos, wallabies, and birds that make the journey from as far away as Japan and China. But it is under threat as the town of Torquay grapples with a population boom and seemingly endless hunger for development. As porous dirt has given way to roof tiles and concrete, urban stormwater is flooding into the once-pristine wetland, which needs salt water to survive. And the one dam nearby that could offer some protection is at risk of being decommissioned within a week.

Government's own report finds 'sufficient uncertainty' about CSG proposal near contaminated site An independent report has found "sufficient uncertainty" about the contamination risk and questioned the accuracy of a proposal to drill hundreds of coal seam gas wells near a controversial contaminated site. Key points: Gas company Arrow Energy has proposed to drill hundreds of gas wells near the contaminated Linc Energy underground coal gasification plantAn independent report says the modelling in the proposal is a "simplification of a highly complex system" and the conclusion that there will be no off-site contamination "may be incorrect" Arrow Energy says historical observations at the site indicate a low likelihood of contaminant spread regardless of CSG development In February, Shell-owned Arrow Energy, applied to amend its environmental approvals to drill 280 coal gas (CSG) wells and build 440 kilometres of pipelines in the proximity of the contaminated Linc Energy underground coal gasification (UCG) plant in southern Queensland. Simplification of 'a highly complex system'

What are 'zombie mines'? What do they have to do with Malcolm Turnbull? They're being called 'zombie mines' — proposed new coal mines or expansions that may never see the light of day. A new report by the Australia Institute says there are 23 new coal projects proposed in NSW — equivalent to 15 Adani-sized mines. The Australia Institute says governments rarely intervene to revoke an approval, or otherwise kill off a zombie mine. Now, former prime minister Malcolm Turnbull has weighed in. But what is the issue exactly?

Artist Cheryl Hodges has had work stolen countless times online, and she is on a mission to end the theft For 16 years, Cheryl Hodges has seen her botanical illustration of a golden wattle flower spread across the internet without her permission. She has seen it "innocently" used in environmental brochures, and copied by other artists "for their own gain, selling it as their own on their websites". But Ms Hodges said all of those instances were theft. "Just because you find this image on the internet does not mean you have any right to copy it for any purpose whatsoever," Ms Hodges said in a social media post. Ms Hodges said in the past she has contacted people who used her work who were immediately apologetic and offered to fix the issue, but others refused to admit they had done wrong. Now Ms Hodges wants to spread awareness that people shouldn't use art online without permission, and she is prepared to take legal action to make her point.

Melbourne's drinking water and catchment areas put at risk by ‘systemic' illegal logging on steep slopes, experts say Victoria's state-owned logging company VicForests has put Melbourne's drinking supply at risk by illegally logging on steep slopes in an important water catchment area, according to the government regulator. Key points: Logging on slopes steeper than 30 degrees is banned in some areas protected for drinking water supplyThe Victorian government's conservation regulator found the government-run VicForests breached this law at two locationsThe new breaches are the latest in a long-running string of allegations of illegal logging made against the state-owned company The Office of the Conservation Regulator, a Victorian government body tasked with monitoring the state-owned logging company VicForests, found breaches of the law at two locations last year but decided not to take action. Instead it communicated to VicForests an "expectation" that it would comply with the law in future. Melbourne's drinking water at risk

Removing engine idling time from our car journeys like taking 1.6 million cars off the road Are you in the habit of letting your engine idle? It is a question dividing motorists as a campaign grows to reduce vehicle emissions. "Unfortunately, there are no laws in Australia at present to prevent people from idling," Claire Walter, PhD candidate at the University of Queensland, told ABC Radio Sydney's Cassie McCullagh. Why closed borders mean you may finally get a bigger pay rise Have a think about this. The size of Australia's "labour force" is roughly 13.8 million people. That's the pool of workers in the economy. Now, imagine it can't grow quickly. It can only grow slowly as babies are born, and with very low levels of immigration. In such a scenario, if there's a shortage of skills in the economy, workers with those skills will become more valuable.