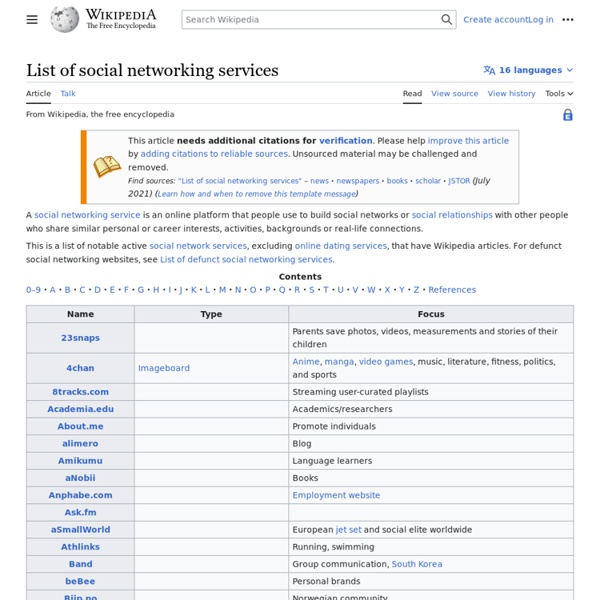 Pearltrees Pearltrees refers to itself as "a place for your interests".[8] Functionally the product is a visual and collaborative curation tool[9][10][11][12] that allows users to organize, explore and share any URL they find online as well as to upload personal photos, files and notes.[13] The product features a unique visual interface[14][15] that allows users to drag and organize collected URLs, and other digital objects.[16] that themselves can be further organized into collections and sub-collections,[17] (URLs). Users of the product can also engage in social/collaborative curation using a feature called Pearltrees Teams.[18] Pearltrees was founded by Patrice Lamothe, CEO,[22] Alain Cohen, CTO,[23] Nicolas Cynober, Technical Director,[24] Samuel Tissier, Ergonomy/UI[25] and Francois Rocaboy, CMO.[26] History[edit] Development of Pearltrees began in 2007. In July 2012 Pearltrees launched their iPhone app.

A Nice List of Great Photoshop Lists Lists have been around for a long while and are a hot topic today. I’ve even compiled some myself for my Photoshop Roadmap blog. They are perfect candidates for massive and steady traffic, and they are an interesting, if not fun, reading. If the compilation has been made with care and lots of research, the result may become a mini or micro web site itself. That’s the reason why content writers (artists and designers in this case) should become aware of this situation.

Visualizing The Web & Social Networks May 26, 2010 Posted by Suzanne Marlatt Edelman Digital, Chicago Follow on Twitter @edelmandigital Seeing is believing and visuals are powerful. Category:Social networking services From Wikipedia, the free encyclopedia Subcategories This category has the following 20 subcategories, out of 20 total. Screenshot of Microsoft "TownSquare" - Social Networking at Work We mentioned Microsoft TownSquare today, the new offering from Microsoft for internal social networking and document sharing, and we have a screenshot for you to check out. From what we can see it looks like you get a steady stream of activity based on employee which is really, really cool and helpful, along with an RSS feed to track the activity. From a project management standpoint, this is a huge.

SlideShare The website gets an estimated 58 million unique visitors a month,[7] and has about 16 million registered users.[citation needed] SlideShare was voted among the World's Top 10 tools for education & e-learning in 2010.[8][9] SlideShare's biggest competitors include Scribd.com, Issuu and Docstoc. Some of the notable users of SlideShare include The White House, NASA, World Economic Forum, State of Utah, O'Reilly Media, Hewlett Packard and IBM. §Zipcasts[edit] In February 2011 SlideShare added a feature called Zipcasts.[10] A Zipcast is a social web conferencing system that allows presenters to broadcast an audio/video feed while driving the presentation through the Internet. Zipcasts also allows users to communicate during the presentation via an inbuilt chat function.

GTD Toolbox: 100+ Resources for Getting Things Done Getting Things Done, also abbreviated as GTD, is a popular time management productivity method created by David Allen. The method is just as popular today as it was back in 2007 when we ran our GTD Ninja post featuring more than 50 apps to help you be more productive and organized. But there are a host of new applications out there to help you be even more productive this year.

This Week in Social Media News: 6 Items Worth Exploring Welcome to our weekly edition of what’s hot in social media news. To help you stay up to date with social media, here are some of the news items that caught our attention. What’s New This Week? SlideShare Announces Zipcast for Live Web Meetings: This new tool allows you to run live video meetings alongside your SlideShare presentations. The video quality is basic but it’s easy to use. Zipcast is integrated with social media buttons, offers a live-stream chat feature and allows up to 5000 participants.

Social network Social networks and the analysis of them is an inherently interdisciplinary academic field which emerged from social psychology, sociology, statistics, and graph theory. Georg Simmel authored early structural theories in sociology emphasizing the dynamics of triads and "web of group affiliations."[2] Jacob Moreno is credited with developing the first sociograms in the 1930s to study interpersonal relationships. These approaches were mathematically formalized in the 1950s and theories and methods of social networks became pervasive in the social and behavioral sciences by the 1980s.[1][3] Social network analysis is now one of the major paradigms in contemporary sociology, and is also employed in a number of other social and formal sciences.

3 Social Media Aggregators That Bring It All Together Thanks to Facebook, Flickr, Twitter, and a host of other social media services, people are more connected than ever. But keeping up with all the tweets, posts, and status updates isn't easy, because they often come from a variety of social media sites. So how do you connect the different services that keep you connected? How do you steer all of that stuff to one spot on the Web where it's a snap to manage? New tools called social media aggregators have risen to address that challenge. Their goal: to provide you with one simple point of entry where you can keep track of the streams from any and all of the most popular social networking sites.

Feedly §History[edit] In November, 2006, Edwin Khodabakchian co-founded DevHD.[3] The company seeks to create a platform that uses RSS feeds, online storage, and social media integration to connect users with the information they find interesting.[3] DevHD’s first project, Streets, which aggregates updates from a variety of online sources is the basis of Feedly. Feedly, which was optimized for RSS feeds, was first released on June 15, 2008.[3] Originally called Feeddo, Feedly was first released as a web extension before moving onto mobile platforms.[4] On March 15, 2013, Feedly announced 500,000 new users in 48 hours due to the closure announcement of Google Reader.[5] By April 2, 2013, the total number of new users was up to 3 million.[6] At the end of May 2013, the total user number was up to 12 million.[7] §Web browser applications[edit]

25+ Tutorials For The Web Minded There is a huge selection of free tutorials on the web for just about everything you can think of. We've put together 25+ sites that should help give you a good start on learning about the web itself and web-related tools you wish you knew more about. General 999Tutorials.com - Features free tutorials on PHP, general web stuff, Google AdSense and more. CommunityMX.com - Over 2,000 tutorials for Flash, Fireworks, ColdFusion, Dreamweaver and more. Good-Tutorials.com - An aggregator for tutorials from around the web for things like CSS, Flash, Photoshop and more.

How to write a corporate Twitter strategy (…and here’s one I mad (Cross-posted from the Cabinet Office digital engagement blog, with thanks for the guest spot.) You might think a 20-page strategy a bit over the top for a tool like Twitter. After all, microblogging is a low-barrier to entry, low-risk and low-resource channel relative to other corporate communications overheads like a blog or printed newsletter. Web 2.0 Herkunft[Bearbeiten] “An increase of outsourcing with web services is nothing less than the start of what Scott Dietzen, CTO of BEA Systems, calls the Web 2.0, where the Web becomes a universal, standards-based integration platform. Web 1.0 (HTTP, TCP/IP and HTML) is the core of enterprise infrastructure.”