Badass of the Week: Anthony Omari 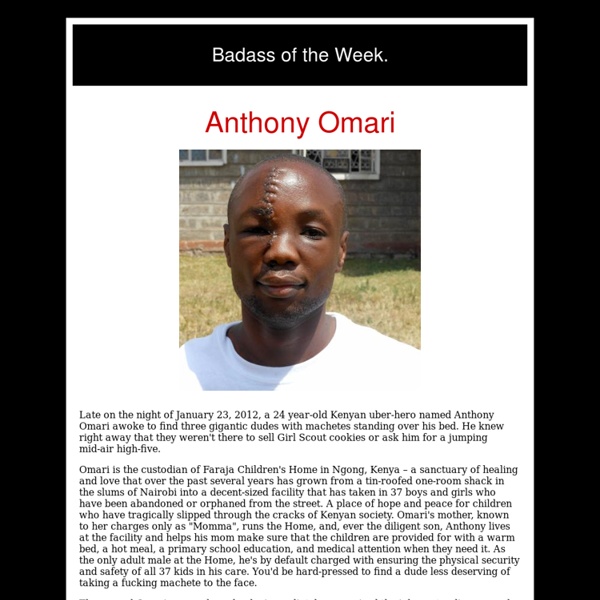 Anthony Omari Late on the night of January 23, 2012, a 24 year-old Kenyan uber-hero named Anthony Omari awoke to find three gigantic dudes with machetes standing over his bed. He knew right away that they weren't there to sell Girl Scout cookies or ask him for a jumping mid-air high-five. Omari is the custodian of Faraja Children's Home in Ngong, Kenya – a sanctuary of healing and love that over the past several years has grown from a tin-roofed one-room shack in the slums of Nairobi into a decent-sized facility that has taken in 37 boys and girls who have been abandoned or orphaned from the street. A place of hope and peace for children who have tragically slipped through the cracks of Kenyan society. Omari's mother, known to her charges only as "Momma", runs the Home, and, ever the diligent son, Anthony lives at the facility and helps his mom make sure that the children are provided for with a warm bed, a hot meal, a primary school education, and medical attention when they need it.

Why the mantis shrimp is awesome. They all look the same to me SCORE 109 That escalated quickly SCORE 111 Weird Al Magic Trick SCORE 116 Mexican proverb SCORE 110 Bento Laptop Tablet Hybrid by René Woo-Ram Lee Bento is quite an exceptional and forward thinking concept by René Woo-Ram Lee. It’s quite a plausible scenario that most of use/own a tablet, a PC, external hard drives and a smartphone. Now combine the power of these to have fully customizable Bento Laptop! The Box accommodates all the gear to work as one whole unit or individually; as you see fit. Features Laptop with 15″ OLED screen11″ tablet and 4″ phone sit in shallow depressionsSolar powered lithium-ion battery1TB SSD drive

20 Captivating Photos Shot At Exactly The Right... There are some things in life that make me feel dated (notice I didn’t use the word “old” LOL). For example, sending a fax, writing in cursive (with a pen) and talking on any phone with a cord (and twirling it around my fingers) are all things that kids born in 2011 might never have the opportunity to experience. I remember back in the days when people would say, “I wish I had my camera with me today, I could have taken some great pictures.” Now that practically everyone has a smartphone, we all have our cameras with us everywhere we go. That is evident in these photographs taken at exactly the right moment. The photography we see these days is phenomenal.

Sleeping in an original bed Art & Design We wouldn't mind having one of these beds as our own. In which one would you like to take a nap? A Modern Pop-Up Children's Storybook That Uses Augmented Reality Australia-based Resin is a company that has recently developed a modern pop-up book using augmented reality. By taking an existing storybook, “Two Left Feet”, they have brought it to life using 3D animation and augmented reality. To experience the fun, one does not need to own the storybook.You are also able to print out images to experience the same augmented reality.