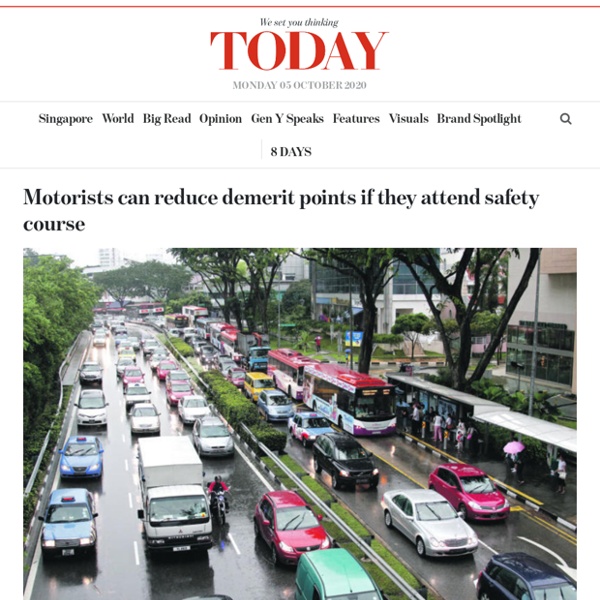 SINGAPORE — Motorists who have accumulated more than half of their maximum allowable demerit points now have a chance to redeem themselves via the Traffic Police’s Safe Driving Course (SDC), set to be introduced next month. Designed to educate motorists on safe driving techniques, correct dangerous driving behaviour and encourage good road habits, the SDC is an enhancement to the Driver Improvement Points System (DIPS). Motorists who complete the SDC will have three demerit points cancelled from their driving records, but they can only get demerit points cancelled twice during their lifetime. The SDC will consist of both theory and practical sessions for a total of 4 hours. These can be completed within a day or on two different days at one of the licensed driving schools - ComfortDelGro Driving Centre, Singapore Safety Driving Centre and Bukit Batok Driving Centre. Eligible motorists will receive an invitation from the Traffic Police to attend the SDC.

[Negative Reinforcement] Safe driving course revises rules to help drivers cut 4 demerit points SINGAPORE: Motorists who have clocked up eight demerit points, and want to have four of those points expunged from their record will now be able to do so after the Traffic Police relaxed the criteria for joining their voluntary Safe Driving Course. Effective Wednesday (Nov 1), the Traffic Police is lowering the number of demerit points a motorist must have accumulated before being eligible to attend the Safe Driving Course, the Singapore Police Force (SPF) announced on Tuesday. This will allow more motorists to benefit from the course, which aims to encourage motorists to come forward to correct their driving behaviour on their own accord. Motorists who complete the course will have four demerit points deducted from their driving records. From Wednesday, motorists with eight demerit points will be able to attempt the SDC, compared with the 12 points required before the revision of the rules.

Safety on point: Demerit point penalties for traffic violations to start PHUKET: Phuket Provincial Police Deputy Commander Col Phakin Na-ranong, who also serves as the island’s Traffic Police Chief, has confirmed that the points-based system of penalties for those caught breaking traffic laws will begin nationwide on Dec 19. A police officer checks a motorcycle rider’s driver’s licence in Patong this week. Photo: Tanyaluk Sakoot The move is being heralded as a way to finally rein in wayward drivers of cars and motorbikes, who repeatedly flout traffic laws on the premise they can just pay the fine and continue their dangerous driving habits. From Dec 19, police officers issuing tickets for moving violations will update the details of the fine, including which driver has been caught, to a national database which every police station in the country will be able to access, Col Phakin explained. “The system used is the same one that used in issuing e-tickets, which is already connected to the Department of Land Transport database.

[Negative Punishment] E-scooter ban on footpaths to extend to all motorised PMDs under amendments to Active Mobility Act SINGAPORE: The ban on riding e-scooters on footpaths will be extended to all motorised personal mobility devices (PMDs) under amendments to the Active Mobility Act introduced in Parliament on Monday (Jan 6). The ban came into effect for e-scooters – defined as motorised PMDs with handlebars – on Nov 5 last year. Under the Active Mobility (Amendment) Bill, the footpath ban will include devices such as hoverboards and electric unicycles. Certificate of Merit. What is it? And how can you get one? Getting a driver’s licence ensures that you are qualified to drive. But along with that comes the responsibility of making sure you drive safely, not just for your sake but also for the sake of other road users. To ensure that drivers are aware of this and keep safety uppermost on their minds while driving, the Traffic Police has instituted a system of rewards and punishments. In March 1983, the Traffic Police introduced the Driver Improvement Points System (DIPS). How does the Driver Improvement System work?

In Finland, speeding tickets are linked to your income Around 3,400 people die in traffic crashes every day, leading to around 1.25 million deaths globally each year. One-third of these deaths are caused by speeding, according to the World Health Organization. With road traffic crashes the leading cause of death among young people, some countries are coming up with innovative ways to stop people speeding. In Finland, speeding fines are linked to salary.

[Negative Punishment] Lucky Plaza accident: Driver's licence was suspended immediately, police say SINGAPORE: The 64-year-old male driver who was arrested for dangerous driving causing death in the Lucky Plaza accident also had his driving licence suspended immediately, police said. In response to queries by CNA, police said on Tuesday (Jan 14) his licence was suspended with "immediate effect" upon his arrest, adding that investigations are still ongoing. Two women were killed and four others injured in the accident on Dec 29 last year.

DirectAsia.com Safer Roads Campaign 2015 In conjunction with the final day of the Home Team Festival 2015, the Traffic Police (TP) and the Singapore Road Safety Council (SRSC) held the DirectAsia.com Safer Roads Campaign 2015 today. This marked the third year that DirectAsia.com is sponsoring the campaign in support of the Safer Roads Singapore action plan â€“ to foster a culture of safe and courteous road use in Singapore. The event was graced by Mr Amrin Amin, Parliamentary Secretary, Ministry of Home Affairs. activation: Mumbai Traffic Police says ‘honk more wait more’, Marketing & Advertising News, ET BrandEquity Mumbai is one of the noisiest cities in the world and a lot of this noise can be traced back to cacophony at the signals. As is commonly observed on Mumbai roads, Mumbaikars honk even when the signal is red! Needless to say, this noise pollution is making the city alarmingly unhealthy to live in. To tackle this honking menace, the Mumbai Traffic Police, in partnership with FCB Interface came up with an innovative solution called The Punishing Signal. Special decibel meters were connected to traffic signals across the island city.

[Positive Punishment] Two Men Arrested For Dangerous Driving The Police have arrested two men, aged 30 and 41, for their suspected involvement in a case of dangerous driving. On 29 July 2020 at 9.06pm, the Traffic Police were alerted to an accident that occurred along Central Expressway (CTE) towards Seletar Expressway (SLE) after Ang Mo Kio Avenue 5 involving a van and a car. The van driver and his passenger were conscious when conveyed to Khoo Teck Puat Hospital.

25 heavy vehicle drivers get summonses in Traffic Police operation SINGAPORE: Twenty-five heavy vehicle drivers were handed traffic summonses for range of offences in an enforcement operation across multiple locations in Singapore on Thursday (Aug 15). The offences included speeding and failing to keep to the left. Following two Traffic Police (TP) officers on the operation, CNA observed that other drivers were stopped for not wearing their seatbelts, or not properly displaying the speed limit sticker at the rear. “TP takes a serious view of heavy vehicle drivers who flout traffic rules as heavy vehicles are capable of causing greater damage and loss of lives when involved in accidents,” it said in a news release.

Higher fines for motorists, pedestrians and cyclists from April: MHA SINGAPORE: The Ministry of Home Affairs (MHA) will raise fines for road traffic offences starting Apr 1, in a bid to strengthen deterrence against irresponsible driving. In a press release on Thursday (Feb 21), MHA said that raising composition sums, or fines, would ensure that they remain effective as a deterrent and curb the uptrend in road traffic offences. "It is important to nip unsafe driving in the bud, before serious accidents happen and people are killed or hurt," said MHA. READ: More drink-driving accidents, motorists running red lights: Police