Who are the doctors in the viral hydroxychloroquine video? 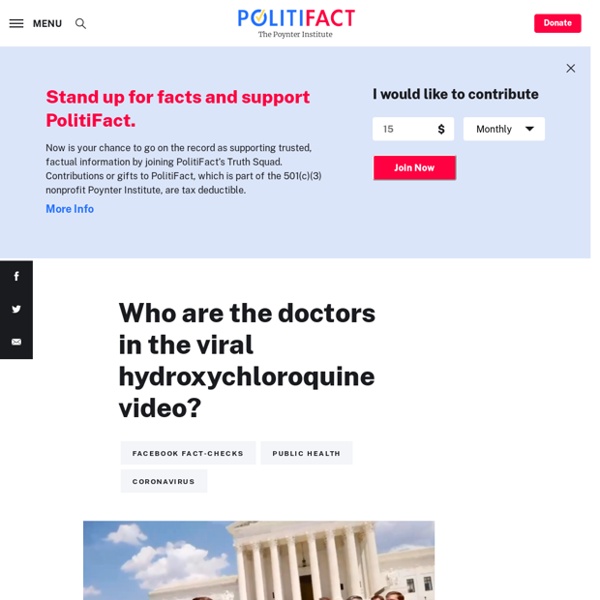 Despite social media platforms’ efforts to remove it, millions of people have seen a viral video of doctors making false and misleading claims about the coronavirus pandemic. Breitbart, a conservative news outlet, published the 40-plus-minute-long video on Facebook, Twitter and YouTube on July 27. It’s a live stream of a Washington, D.C., press conference organized by the Tea Party Patriots, a conservative group backed by Republican donors. Rep. Ralph Norman. R-S.C., attended the event. The video went viral after it was widely shared in Facebook groups for anti-vaxxers and people against face masks. RELATED: Fact-checking a video of doctors talking about coronavirus, hydroxychloroquine "There was a group of doctors yesterday, a large group that were put on the internet. Social media platforms removed the video because it contains several claims that run counter to official recommendations from public health officials. (Screenshot from Facebook) Dr. Dr. Dr. Dr. Dr. Dr.

What Do We Know About Children and Coronavirus Transmission? Key Points: With just a few weeks remaining before schools in the U.S. are scheduled to reopen, and the federal government encouraging in-person schooling, there remain many questions about the risk COVID-19 poses to children and their role in transmission of the disease. Indeed, other countries have not reopened schools with the levels of community transmission found in the U.S., coupled with its insufficient testing and limited contact tracing.Our review of the latest available data indicates that, while children who are infected with COVID-19 are more likely to be asymptomatic and less likely to experience severe disease (though a small subset become quite sick), they are capable of transmitting to both children and adults.What remains unclear and where evidence is still needed is: whether children are less likely to be infected than adults and, when infected, the frequency and extent of their transmission to others.

40 Times People Noticed These Instagrammers That Are Beyond Fake And Decided To Expose Them Online (New Pics) "The second is one that many people don’t like to address—the insecurities of those who feel the need to edit their photos. They’ve been editing their photos for so long it could mean losing the validation from their followers, losing followers, and maybe losing sponsors if they came clean. So, they would rather enjoy the false fame, than risk losing it over integrity." We also wanted to find out what steps could be taken to reduce the amount of photo-editing that people do online. "This is a very complicated question, but one step that we should fight for is to get rid of all filters that alter the shape, size, or proportions of anything to do with someone’s body," Cluelessnumber7 told us.

Study Shows 5.4 Million Have Lost Insurance Amid Pandemic – BillMoyers.com Study Shows 5.4 Million Have Lost Insurance Amid Pandemic Medicare for all rally in Los Angeles in February 2017. (Photo by Molly Adams/ flickr CC 2.0) This post originally appeared on Common Dreams. 'This is a war': Republicans ramp up bid to control election maps for next decade A little-known Republican group is ramping up millions of dollars in funding from major US corporations such as CitiGroup and Chevron to protect the conservative stronghold on the country. The Republican State Leadership Committee (RSLC) – which held the key to the GOP’s political takeover a decade ago – launched the Right Lines 2020 campaign last September, taglined: “Socialism starts in the states. Let’s stop it there, too.” It’s hoping to meet a $125m investment goal in an effort to retain 42 state legislature seats that the group says are key to holding power in the House of Representatives in battleground states including Wisconsin, Texas, Florida and New York.

How Covid-19 Signals the End of the American Era Wade Davis holds the Leadership Chair in Cultures and Ecosystems at Risk at the University of British Columbia. His award-winning books include “Into the Silence” and “The Wayfinders.” His new book, “Magdalena: River of Dreams,” is published by Knopf. Never in our lives have we experienced such a global phenomenon. Bully, coward, victim? Inside the sinister world of Trump mentor Roy Cohn Back in 2004, with the documentary Heir to an Execution, Ivy Meeropol began the decades-spanning project of exorcising the demon haunting her family. The Academy-shortlisted film sheds some light on the dark heritage of the Meeropol kids, descended as they are from Julius and Ethel Rosenberg, the couple executed by the United States government in 1953 having been convicted of sharing military secrets with the Soviet Union. When not teaching as an economics professor, Ivy’s father Michael spent most of his adult life on a crusade to restore and advocate for the reputation of his late parents, after years of defamation from the sinister prosecutor in the case Roy Cohn. Ivy’s film-making brought some elusive semblance of closure to this process – until, that is, early November 2016.

Attenborough: 'Curb excess capitalism' to save nature Media playback is unsupported on your device Sir David Attenborough says the excesses of western countries should "be curbed" to restore the natural world and we'll all be happier for it. The veteran broadcaster said that the standard of living in wealthy nations is going to have to take a pause. Nature would flourish once again he believes when "those that have a great deal, perhaps, have a little less".

The Iconoclast unmasked: the man behind far-right YouTube channel He is the anonymous architect behind one of the most successful and toxic British far-right YouTube channels, responsible for disseminating racist, Islamophobic and antisemitic material. For years the individual known as The Iconoclast has managed to protect his identity despite amassing nearly 21m views and more than 218,000 subscribers. However the Observer can reveal that the figure behind one of the biggest far-right content producers in the UK – and the movement’s most prominent anonymous account – is a former media student called Daniel Atkinson. Campaigners said the unmasking of Atkinson was important because he is emblematic of the latest manifestation of the far right.

Pink seesaws across US-Mexico border named Design of the Year 2020 A collection of bright pink seesaws that allowed people to interact over the US-Mexico border has won the prestigious Design of the Year award, with its creators saying they hoped the work encourages people to build bridges between communities. The Teeter Totter Wall, which bridged across El Paso in Texas and Ciudad Juárez in Mexico during a 40-minute session, was described as not only feeling “symbolically important” but also highlighting “the possibility of things” by the judging panel. The creators of the seesaws, Ronald Rael, a professor of architecture at the University of California, Berkeley, and Virginia San Fratello, an associate professor of design at San José State University, first came up with the idea a decade ago after the Secure Fence Act 2006, which started large-scale building on the border. They said they hoped the design would help people reassess the effectiveness of borders and encourage dialogue rather than division.

A field guide to Trump's dangerous rhetoric All leaders are demagogues. You may not realize this, because we’ve come to associate the word “demagogue” with only dangerous populist leaders. But in Greek, the word just means “leader of the people” (dēmos “the people” + agōgos “leading”). Some demagogues are good, and some are dangerous. The fundamental difference between leaders who are good demagogues and leaders who are dangerous demagogues is found in the answer to this simple question: Are they accountable for their words and actions? Obviously, an unaccountable leader is dangerous in any political community. Economic Inequality: It’s Far Worse Than You Think In a candid conversation with Frank Rich last fall, Chris Rock said, "Oh, people don’t even know. If poor people knew how rich rich people are, there would be riots in the streets." The findings of three studies, published over the last several years in Perspectives on Psychological Science, suggest that Rock is right. We have no idea how unequal our society has become. In their 2011 paper, Michael Norton and Dan Ariely analyzed beliefs about wealth inequality.

#SaveTheChildren, QAnon, and human trafficking: How Instagram and Facebook spread misinformation For many supporters of the #SaveTheChildren movement, face masks are part of the problem. Rather than saving lives by slowing the spread of Covid-19, proponents argue, letting your child wear a mask makes it harder for them to cry for help, which they will need to do, because there are evil people, right now, coming to kidnap them. “Save the Children,” like so many other moral panics, sounds like such a plainly obvious force of good, that to question it feels like you are marching under the banner of “Fuck the Children.” What do you say, for instance, to someone who believes that there are 800,000 children being trafficked every year, and that the government does nothing to stop it?

How Anti-Asian Activity Online Set the Stage for Real-World Violence Negative Asian-American tropes have long existed online but began increasing last March as parts of the United States went into lockdown over the coronavirus. That month, politicians including Representative Paul Gosar, Republican of Arizona, and Representative Kevin McCarthy, a Republican of California, used the terms “Wuhan virus” and “Chinese coronavirus” to refer to Covid-19 in their tweets. Those terms then began trending online, according to a study from the University of California, Berkeley. On the day Mr. Gosar posted his tweet, usage of the term “Chinese virus” jumped 650 percent on Twitter; a day later there was an 800 percent increase in their usage in conservative news articles, the study found. Mr.