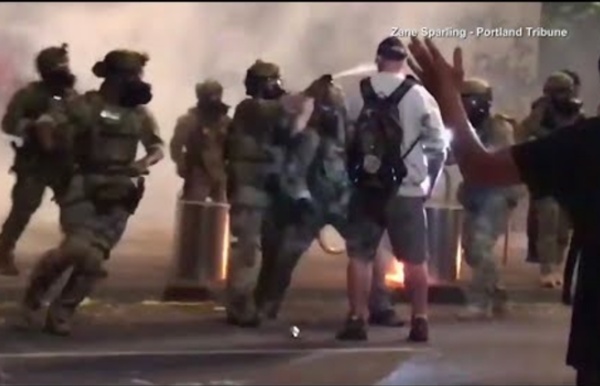 How Covid-19 Signals the End of the American Era Wade Davis holds the Leadership Chair in Cultures and Ecosystems at Risk at the University of British Columbia. His award-winning books include “Into the Silence” and “The Wayfinders.” His new book, “Magdalena: River of Dreams,” is published by Knopf. Never in our lives have we experienced such a global phenomenon. For the first time in the history of the world, all of humanity, informed by the unprecedented reach of digital technology, has come together, focused on the same existential threat, consumed by the same fears and uncertainties, eagerly anticipating the same, as yet unrealized, promises of medical science. In a single season, civilization has been brought low by a microscopic parasite 10,000 times smaller than a grain of salt.

50 Photos To Remind Everyone That Many Animals Are Way Bigger Than Most Of Us Think We usually imagine felines as cute little furballs who, no matter how fast they grow up, still fit into our lap just fine. But there’s one cat breed known as the Maine coon that can easily reach up to 40 inches. In comparison, the average size of an adult domestic cat comes in at as little as 8 to 10 inches. In order to find out more about the scale of these massive felines, Bored Panda reached out to Jess Beckwith, a professional Maine coon breeder based in the United Kingdom from RudyCats.co.uk.

untitled Alabama in 1963 was an epicenter of the civil rights movement, with lunch counter sit-ins, protest marches and other actions aimed at dismantling state-sponsored segregation. There, for the first time, Brad encountered signs designating some public spaces for white people and some for Black people. After graduating from Benjamin Franklin High School in Philadelphia in 1968, Lomax considered joining the military, but as the war in Vietnam raged, with Black soldiers bearing a disproportionate share of the burden, he decided instead to attend Howard University in Washington. Donald Trump fans cry betrayal as he rebukes Capitol violence Donald Trump’s belated “concession” to a peaceful and orderly transition of power after the storming of the US Capitol has provoked anger and conspiracy theories among some of his most ardent followers. On social media channels and chatrooms like Parler and 4chan, where far-right Trumpists have gravitated as other social media sites have increasingly shut out the president, there were complaints of betrayal. Trump claimed on Thursday that he was “outraged by the violence, lawlessness and mayhem” of the Capitol siege that he had incited, and said those who “broke the law will pay” – comments that perhaps reflected concern over mounting legal and political hazard rather than a newfound sense of contrition and integrity.

Gilead Is Profiteering Off a COVID Drug We Already Paid For – BillMoyers.com FOSTER CITY, CALIFORNIA - APRIL 29: A sign is posted in front of the Gilead Sciences headquarters on April 29, 2020 in Foster City, California. Gilead Sciences announced preliminary results of a drug trial with that showed at least 50% of patients with coronavirus that treated with a five-day dosage of remdesivir improved and more than half were released from the hospital within two weeks. (Photo by Justin Sullivan/Getty Images) Dogs Poop in Alignment With Earth's Magnetic Field Dogs poop with their bodies facing a certain direction based on the Earth’s magnetic field. As incredible as that sounds, a recent scientific study has proven that dogs are sensitive to small variations of the Earth’s magnetic field, which affects the way they go to the bathroom. After studying dogs for several years, a team of scientists in Europe observed that dogs preferred to poop with their body aligned along the North-South axis under calm magnetic field conditions.

untitled Most of us have at least a few regrets from our childhood related to the way we at times interacted with our parents. Maybe there have been moments when you got mad at them for not buying you a certain toy. Or perhaps at times, you acted like an ungrateful little brat despite how much your parents have done for you. And when you think about those moments, the feeling is so soul-crushing that it seems like you would do almost anything for a chance to go back and change them. How to Fix the Supreme Court, Part One: C is for Clarence - PREVAIL by Greg Olear “If everyone made war only according to his own convictions, there would be no war,” Prince Andrei Bolkonsky thought… A good player who loses at chess is genuinely convinced that he has lost because of a mistake, and he looks for this mistake in the beginning of the game, but forgets that there were also mistakes at every step in the course of the game, that none of his moves was perfect. The mistake he pays attention to is conspicuous only because his opponent took advantage of it. —War and Peace (Leo Tolstoy, 1867)

'This is a war': Republicans ramp up bid to control election maps for next decade A little-known Republican group is ramping up millions of dollars in funding from major US corporations such as CitiGroup and Chevron to protect the conservative stronghold on the country. The Republican State Leadership Committee (RSLC) – which held the key to the GOP’s political takeover a decade ago – launched the Right Lines 2020 campaign last September, taglined: “Socialism starts in the states. Let’s stop it there, too.” It’s hoping to meet a $125m investment goal in an effort to retain 42 state legislature seats that the group says are key to holding power in the House of Representatives in battleground states including Wisconsin, Texas, Florida and New York. “There’s a decade of power and a decade of dominance that’s truly on the line,” RSLC president Austin Chambers, a 24-year-old Republican operative, told Sean Spicer on his Newsmax show in March. The group recently appointed party strategist Karl Rove and ousted White House chief of staff Reince Priebus to its board.

Do These A.I.-Created Fake People Look Real to You? click 2x There are now businesses that sell fake people. On the website Generated.Photos, you can buy a “unique, worry-free” fake person for $2.99, or 1,000 people for $1,000. If you just need a couple of fake people — for characters in a video game, or to make your company website appear more diverse — you can get their photos for free on ThisPersonDoesNotExist.com. Adjust their likeness as needed; make them old or young or the ethnicity of your choosing. 10 Pics Of People Before And After They Were Asked To Smile (New Pics) The Dalai Lama said, "A simple smile. That’s the start of opening your heart and being compassionate to others." Smiles have the ability to change one's whole day, and not only to the one that's smiling, but also to those who see a smile. It's just a simple expression, and yet it may be the most powerful, as it's the most positive one.

Fact-checking Hawley’s claim about Pennsylvania’s election law Sen. Josh Hawley of Missouri led the Senate charge against the electoral college certification of Joe Biden’s victory. Much of his argument was based on changes to mail-in voting in Pennsylvania. Hawley said that he objected to Biden’s win because Pennsylvania failed to follow its own state election laws.