Artdaily.org - The First Art Newspaper on the Net 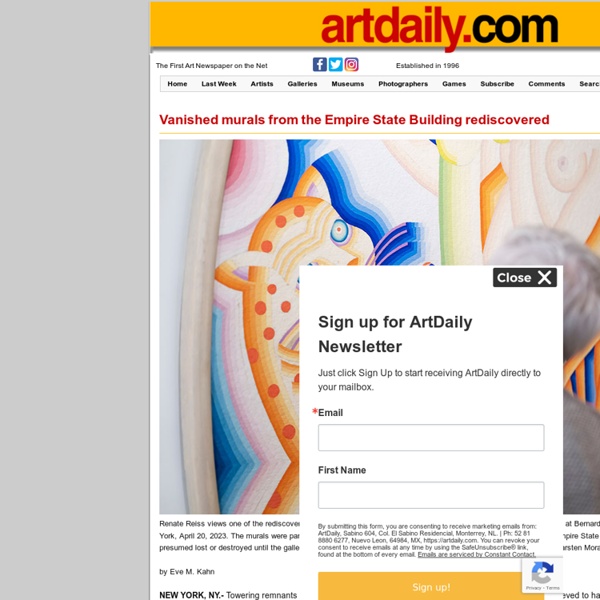 A radical new look at the greatest of Elizabethan artists Working at Waddesdon Manor brings many surprises. I should be used to the range and richness of Rothschild collections, but I never expected to encounter two masterpieces here that are almost certainly by the English artist Nicholas Hilliard (1547–1619). Even less, that these two paintings would turn out to transform our understanding of his work. Queen Elizabeth I (1533–1603) (1576–78), attributed to Nicholas Hilliard. We’ve created the Huntington Channel to share lectures and conferences with the world as a testament to the vitality of the intellectual work done here. We’ve been capturing audio and posting it on iTunes U for some time; that’s now all available here. And, with video, we’re providing our online audience with an even richer experience, almost as if you were seated in the auditorium itself. We’ll live stream some of our lectures so you can view them in real time if you’re unable to make it to The Huntington for a talk, or if it’s sold out. And we’ll archive them right here so you can see them anytime.

Luncheon of the Boating Party by Pierre-Auguste Renoir Luncheon of the Boating Party by Auguste Renoir (1881) My Daily Art Display today features one of the best known Impressionist paintings. It is Luncheon of the Boating Party by Renoir which he painted in 1881. Although I would rank Impressionism outside my top three favourite art genres, I was fascinated by this painting and the story behind it. Unexpected Meetings #5: Facing the Afterlife – Empires of Faith For our fifth instalment of this series of posts on unexpected juxtapositions in the Imagining the Divine exhibition at the Ashmolean Museum, Maria Lidova is struck by two very different objects in the first gallery that tackle similar themes of death and marriage. Near the beginning of the Imagining the Divine exhibition is one of the best examples of early Christian gold glass in the Ashmolean Museum’s collection. In late antiquity, gold glass vessels – vessels containing gold leaf designs fixed between two layers of glass – were widely used in a funerary context. Adherents of various religions, especially Jews and Christians living in Rome, would commission them for commemorative banquets and fix them on the walls beside tombs in the catacombs. Most of the vessels were intentionally broken before they were attached to the walls, leaving only the bases bearing representations that were often religious in content.

Episodes & Images I've always thought that the expansion of 19th century London must have been a real sight to behold. It was increasing by leaps and bounds, becoming, by the mid-point of the century, the largest city in the world. London in the 19th century had political and religious freedoms, making it a stable alternative to many other countries in the world and it was flooded with immigrants. Its economy was robust, and London’s positioning as a port city only served to enhance its commitment to industries like trade, shipping, and fishing. As such, London became the place, along with America, for people the world over to begin their fresh starts. Archaeologists have found a heavy stone slab covering the tomb of one of the first Catholic priests in Mexico following the 1521 Spanish conquest, a grave sunk into the floor of what appears to be an Aztec temple. The discovery suggests the extent to which the Spanish reused the temples of the Aztec capital in the first years after capturing it. The huge slab was uncovered in recent days at the site of the now-disappeared first cathedral of Mexico City, built in 1524 yards from the current cathedral that replaced it in the 1620s. The nearly 2-metre-long slab was sunk into the same level of the stucco floor of what appears to be an Aztec temple. The cathedral was simply built over the temple and apparently used the same floor.

Rediscovered Rodin masterpiece soon at auction in Paris PARIS.- On 30th May, Artcurial will offer at auction Andromède, a rare Rodin marble sculpture with an extraordinary history. The long lost masterpiece, in the same familly for over 130 years, is estimated between € 800,000 - 1,200,000. In 1888, Chilean diplomat Carlos Morla Vicuña commissioned a marble bust of his young wife, Luisa, from Auguste Rodin. The same year, the sculpture is exhibited at the annual Salon National des Beaux-Arts in Paris. It is so well received that the French State requests to purchase it for the Musée du Luxembourg. Carlos Morla Vicuña agrees to transfer the bust of his wifeas a gesture of friendship for France.

View this week’s image here. Producer: Dan Morelle Subscribe, rate and review on iTunes and follow Janina on Twitter. Follow History Hit on Facebook, Instagram and Twitter. Please share this episode on Twitter and Facebook. The Atlantic slave trade: What too few textbooks told you - Anthony Hazard The Atlantic slave trade sent slaves to various locations in the world. What effect did this forced migration have on these areas? Visit the Mariner’s Museum Captive Passage website. 8 Influential Female Art Historians You Should Know Hayden Herrera An art historian’s job, in the most basic and purest sense, is to find artifacts, documents, and stories that shed more light on a specific person or art genre—and Herrera excels at this. With her widely acclaimed 1983 book Frida: A Biography of Frida Kahlo, Herrera cemented her place as a foremost scholar on Kahlo’s life and work. The biography went on to inspire the 2002 film starring Salma Hayek and Alfred Molina, and is still an important resource for learning about Kahlo’s artmaking, romances, and health issues, among other topics. Herrera has also published biographies on artists like Arshile Gorky and Joan Snyder; a Guggenheim fellowship recipient, she earned her Ph.D. at the CUNY Graduate Center.