Is the Bystander Effect Real? 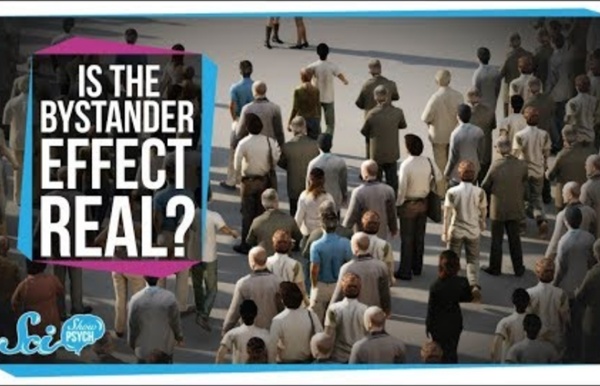 The 21st century bystander effect happens every day online If you’re going to fall, injure yourself and need help, where is a good place to do it? Should you choose a busy thoroughfare or a deserted backstreet? Statistics and experiments in social psychology will tell you that if you need help, you should avoid dropping in a busy street, even if hundreds of people are passing through.

How the Social Context Influences Helping – Principles of Social Psychology – 1st International Edition Review Bibb Latané and John Darley’s model of helping behavior and indicate the social psychological variables that influence each stage. Although emotional responses such as guilt, personal distress, and empathy are important determinants of altruism, it is the social situation itself—the people around us when we are deciding whether or not to help—that has perhaps the most important influence on whether and when we help. Consider the unusual case of the killing of 28-year-old Katherine “Kitty” Genovese in New York City at about 3:00 a.m. on March 13, 1964. TODAYonline I refer to the news reports of the fatal traffic accident on Sunday (Dec 29) at Lucky Plaza. I applaud the Good Samaritans who unselfishly helped to lift up the car, pulled the victims out and attended to them. These are acts of true heroism. They encourage us to lend help to accident victims when needed and show that there are still compassionate people who don’t respond to accidents by whipping out their phones first to take videos and photos to circulate to their friends. In Sunday’s incident, one of the first things a bystander could do was to rush to the nearby Mount Elizabeth Hospital Accident and Emergency Department to seek help, as it would have the necessary medical equipment and trauma specialists on duty.

10 Notorious Cases of the Bystander Effect The bystander effect is the somewhat controversial name given to a social psychological phenomenon in cases where individuals do not offer help in an emergency situation when other people are present. The probability of help has in the past been thought to be inversely proportional to the number of bystanders. In other words, the greater the number of bystanders, the less likely it is that any one of them will help. This list describes the prototype of the effect and cites nine particularly heinous examples. What Is the Bystander Effect? If you witnessed an emergency happening right before your eyes, you would certainly take some sort of action to help the person in trouble, right? While we might all like to believe that this is true, psychologists suggest that whether or not you intervene might depend upon the number of other witnesses present. What Is the Bystander Effect? The term bystander effect refers to the phenomenon in which the greater the number of people present, the less likely people are to help a person in distress. When an emergency situation occurs, observers are more likely to take action if there are few or no other witnesses. Being part of a large crowd makes it so no single person has to take responsibility for an action (or inaction).