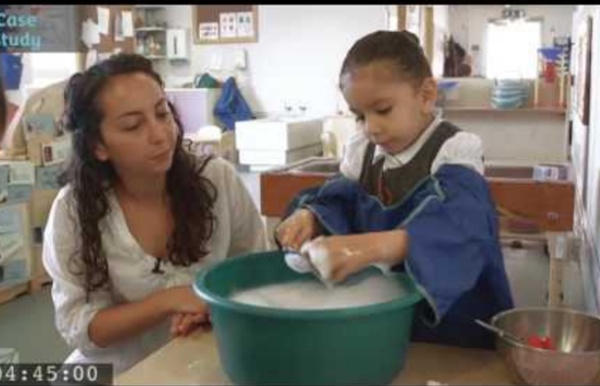 The Brain-Changing Power of Conversation The Science Researchers used highly faithful audio recorders — a system called Language Environment Analysis (known as LENA) — to capture every word spoken or heard by 36 4–6 year olds from various socioeconomic backgrounds over two full days. The recordings were analyzed to measure the number of words spoken by each child, the number of words spoken to each child, and the number of conversational turns — back-and-forth exchanges initiated by either adult or child. Comparing those measurements with brain scans of the individual children, the analysis found that differences in the number of conversational turns accounted for differences in brain physiology, as well as for differences in language skills including vocabulary, grammar, and verbal reasoning.

Total physical response - TPR Where is it from? How can I use it in class? When should I use it? Why should I use it in the classroom? A few useful variations Are there any disadvantages with using TPR? Where is it from? MIT Brain Study: Back-And-Forth Talk Key To Developing Kids' Verbal Skills New MIT research finds that for children's brain development, parents don't just need to talk to their kids — it's important to talk with them, in back-and-forth exchanges. "What we found is, the more often parents engaged in back-and-forth conversation with their child, the stronger was the brain response in the front of the brain to language," said cognitive neuroscience professor John Gabrieli. Story continues below Most Viewed Stories That stronger brain response, measured as children ages 4 to 6 lay in a scanner listening to simple stories, reflects a deeper, more intimate engagement with language, said graduate student Rachel Romeo. On average, a child from a better-off, more-educated family is likely to hear 30 million more words in the first three years of life than a child from a less-well-off family.

How can parents and teachers best educate young children? What principles can both teachers and parents bring to the education of very young children? Gillian Craig, who was part of the Learning Time with Shaun and Timmy writing team, explains. As teachers and parents, we follow certain principles in our roles. Often though, these principles overlap and all we need to do is recognise and reinforce these areas. Ask (the right) questions When my daughter came out of her class one day shortly after her course started, I asked her, 'What did you do in class today?'. 21 of the Best Early Years Books for International Friendship Day We know that skills like empathy aren’t fully developed until later in a child’s life, which is why there are so many stories on friendship and how to treat people aimed at Early Years. International Friendship Day, then, is a great opportunity to share some of these amazing books with your children. It does, however, fall on Sunday 30 July.

Tips on Learning to Talk Learning to talk is a process that starts at birth, when your baby experiences how voices can sound. By 2 years old, most babies have a large vocabulary and can put words together to express their needs and ideas. Let’s see how this process unfolds and what you can do to encourage your baby’s ability to communicate. From Birth to 3 Months Your baby listens to your voice. He coos and gurgles and tries to make the same sounds you make. Being Multilingual: The natives and the speakers Let me start with the good news. We are, all of us without exception, native speakers. This may come as a surprise to those of us who have had close encounters with the second/foreign language world, but is nonetheless true. It means that we are all competent users of language – more or less competent, of course, depending on all sorts of individual and social factors that make us clumsy or proficient in whatever we do. Now the bad news. We are, all of us who use second/foreign languages, failed native speakers of them, which is the meaning of the more politically correct label “non-native speakers”.