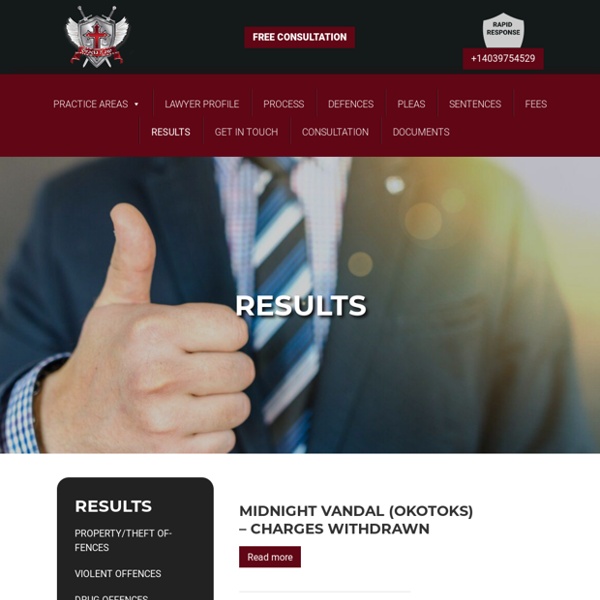 Charges: CC: s.348(1)(B) – Break & Enter and Commit Indictable Offence; s.333.1 – Theft of a Motor Vehicle x 2; s.353.1(4) – Removing a Vehicle Identification Number (VIN); s.354 – Possession of Stolen Property; CDSA: s/4(1) – Possession of a Controlled Substance (Meth). Allegations: My client and a co-accused, broke into some buildings at the Badlands Passion Play site and were observed by an employee to be on a red quad, and putting several expensive tools into a large tote. Both were wearing ski masks. Result: This matter was scheduled for trial, but since my client was already on probation for other charges, I worked out a deal whereby he pleaded guilty only to the charge of B&E and got probation for an additional 6 months.

Violence and Domestic Violence criminal defence lawyer calgary Violent and personal criminal charges range in severity based upon the actual crime. Some of the more common offences, as defined under the Criminal Code of Canada, include: Criminal NegligenceAssaultDomestic AssaultSexual assaultKidnappingUttering ThreatsWeapons and Firearms OffencesHarassmentManslaughter and MurderChild AbandonmentChild AbuseLibel and SlanderHate PropagandaEndangering or Injuring AnimalsAssaulting a Police/Peace OfficerTortureStalkingAccessory After the Fact In most cases, the accused either threatened to cause or actually caused harm to another psychologically or physically. It is important to note threats do not have to be made directly to the other person.

Criminal Defence Lawyer Paul Gracia, B.Ed., M.Ed., J.D., Barrister and Solicitor, is a member in good standing with the Law Society of Alberta, and is an active member of various organizations, including the Calgary Criminal Defence Lawyers Association. Mr. Gracia graduated from Law School at the University of Calgary in 2005, was called to the Bar in 2006 and has been practicing criminal law steadily since then. Unlike most lawyers, who practice in various areas of law, Mr. Gracia practices exclusively in the area of criminal law. After a long and distinguished career as an award-winning teacher, having worked at various levels of the education system, including: a high school teacher in Montreal; founding an alternative education program in the high arctic regions of Nunavik; a principal in northern Yukon; and an instructor at McGill University, Mr.

Statutory and Regulatory Violations Statutory and regulatory violations are special types of offences where the accused has violated provincial laws. Most of these offences carry with them penalties in the form of fines. Offenders are normally issued a ticket for violating the act or regulation, like speeding or failing to stop at a red light. Jail time is only considered in cases where the charges are much more serious. Many statutory and regulatory violations are not recorded onto a person’s permanent criminal record, but some other less serious record, like violations of the Traffic Safety Act being recorded against a person’s driver’s license. Weapons charges - Calgary Criminal Defence Lawyer Having a weapons offence lawyer in Calgary represent you against weapons charges has a direct impact on obtaining positive results in your case. Paul Gracia has successfully represented clients facing all types of weapons offenses, from minor possession to more serious charges of using a weapon during the commission of another crime. Weapons offences are defined by the Criminal Code of Canada.

Sexual and indecent acts calgary defence lawyer Sexual and indecent acts offences are a unique classification of criminal offences as defined by the Criminal Code of Canada. These types of offences often involve some form or act of a sexual nature. Keep in mind, for some of these offences, there may not be any form of actual sexual activity, but mere the suggestion of it. FALL HOME MAINTENANCE CHECKLIST Diamond Valley Custom Homes – Custom Home Builders Calgary It would be amazing if all you needed to prep your custom home for fall was hang a wreath and light a bunch of pumpkin spice candles. While yes, those are a crucial part of getting ready for the change of seasons, there are more important (and not exactly fun) preparations that come with being a homeowner. Consider this everything you need to know before your house transitions from hot summer days to cool fall nights…and eventually freezing temperatures. 1.

Property and Financial Crimes Criminal offences relating to property offences, theft, and financial crimes include white collar crimes, automobile theft, robbery, breaking and entering, cybercrimes, identity theft, arson, shoplifting, beaches of contract, money laundering, and other such crimes are defined under the Criminal Code of Canada. Penalties for such crimes could include fines, probation, imprisonment and travel restrictions. Being charged with one of these offences requires professional and experienced representation from a property and financial crimes lawyer in Calgary. 5 Ultra-Chic Bathroom Design Trends in 2019 Hit the reset button on your bathroom this year with these trending design elements. From contemporary marble to statement art to modern barn doors, we take a look at what’s hot in 2019 for the modern lavatory. 1: Statement Art and Walls Bathrooms are often understated and simply designed. Considering how much time you spend in this small but important room (women spend an average of 39 minutes a day on hair and makeup alone—much of that time in the bathroom), why not add some character to the space?

Impaired and Driving Offences The Criminal Code of Canada defines impaired and driving offences as those involving the use of a motorized vehicle, such as a car, truck, motorcycle, or semi-truck, during the commission of the offence. Some of the more common impaired and driving criminal offences one might be charged with include: Impaired DrivingDriving Over 0.80%Refusing to Provide a Breath SampleDriving on a Suspended LicenseImpaired or DUI Causing Bodily Harm and/or DeathStreet RacingDangerous/Reckless DrivingDangerous /Reckless Driving Causing Bodily Harm and/or DeathLeaving the Scene of an AccidentFailing to Stop at the Scene of an Accident It is important to distinguish impaired and driving offences from minor traffic violations and traffic accidents.