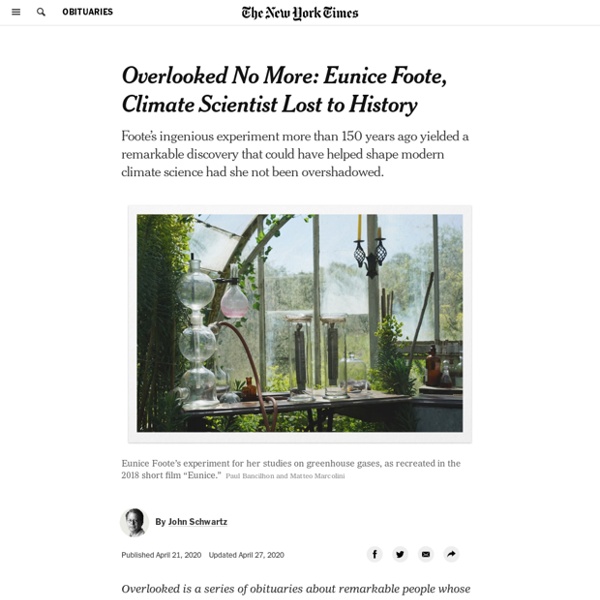 Overlooked is a series of obituaries about remarkable people whose deaths, beginning in 1851, went unreported in The Times. In the 1850s, Eunice Foote, an amateur scientist and activist for women’s rights, made a remarkable discovery about greenhouse gases that could have helped form the foundation of modern climate science. But the scientific paper she published that might have added her name to the pantheon of early climate scientists was quickly forgotten, and she faded into obscurity. There isn’t even a known photograph of her today. The idea that greenhouse gases warm the planet is anything but new, and anything but unsettled. Foote’s ingenious and elegant experiment involved two glass cylinders filled with various substances, including moist air and carbon dioxide. In her 1856 paper about the experiment, “Circumstances Affecting the Heat of the Sun’s Rays,” she wrote that a cylinder with moist air became warmer than one with dry air. Why did Foote’s work disappear for so long?

Origin of world's most prolific farm animal click 2x It is the world’s most common farm animal as well as humanity’s largest single source of animal protein. Some 24 billion strong, it outnumbers all other birds by an order of magnitude. Yet for 2 centuries, biologists have struggled to explain how the chicken became the chicken. Earliest evidence for humans in the Americas Image copyright Ciprian Ardelean Humans settled in the Americas much earlier than previously thought, according to new finds from Mexico. They suggest people were living there 33,000 years ago, twice the widely accepted age for the earliest settlement of the Americas. The results are based on work at Chiquihuite Cave, a high-altitude rock shelter in central Mexico.

The World’s Largest Tropical Wetland Has Become an Inferno This year, roughly a quarter of the vast Pantanal wetland in Brazil, one of the most biodiverse places on Earth, has burned in wildfires worsened by climate change. What happens to a rich and unique biome when so much is destroyed? Pantanal Wetland Fires in 2020 Protected

This All-Female Unit Of Rangers Protecting Wildlife From Poachers In Zimbabwe Is Epic Poaching is slowly becoming a thing of the past in parts of Zimbabwe! A highly-effective all-female anti-poaching ranger unit called the Akashinga is protecting wildlife and revolutionizing the fight against illegal trophy hunting. Since being founded in 2017 as part of the International Anti-Poaching Foundation (IAPF), the Akashinga (meaning The Brave Ones in the Shona language) helped reduce elephant poaching in Zimbabwe’s Lower Zambezi Valley by a whopping 80 percent. To celebrate their achievements, National Geographic recently streamed a short documentary about the Akashinga on World Elephant Day, August 12. Bored Panda reached out to one of the producers of the documentary, Drew Pulley, who has directed and produced documentary content for Nat Geo in over 30 countries around the world. Scroll down for our full interview with him.

Overlooked No More: Kate Worley, a Pioneer Writer of Erotic Comics The Tribunal concluded: “The sexual activity is portrayed in the context of permanent, loving relationships between articulate, caring and reasoning characters.” “It was my favorite review of all time,” Kitchen said. By 1995, Worley and Waller separated, and the adventures of Omaha went on hiatus for more than a decade. Worley married the writer Jim Vance and moved to Tulsa, Okla., where they had a son, Jacob, and a daughter, Sarah. “During those 10 years we each did other projects,” Waller wrote in an email, “and though we tried occasionally to work together again, it was overwhelmingly difficult for both of us, because our breakup had been very long and very bad, something we managed to conceal from our fans till the very end.”

: Alpaca ‘nanobodies’ may hold key to immunity against Covid-19, researchers say The Independent employs reporters around the world to bring you truly independent journalism. To support us, please consider a contribution. Tiny antibodies found in alpacas could hold the key to neutralising the virus that causes Covid-19 and aid in suppressing a second wave of infections, scientists have said. A study carried out by scientists in Sweden and South Africa have used the tiny antibodies, which are roughly a tenth of the size of a normal antibody and called nanobodies, from an alpaca named Tyson to prevent the virus from “binding” or infecting a person. Tyson, a 12-year-old alpaca in Germany, was immunised with virus proteins by scientists at the Karolinska Institute in Stockholm. Earlier this month, the team isolated the nanobodies from Tyson’s blood that bind to the same part of the virus as human antibodies and could block the infection.

Aquifers and Groundwater • Water Science School HOME • Groundwater topics • Groundwater and aquifers A hole dug at the beach is a great way to illustrate the concept of how, below a certain depth, the ground, if it is permeable enough to hold water, is saturated with water. Nearly Half of the U.S. Is in Drought. It May Get Worse. Nearly half of the continental United States is gripped by drought, government forecasters said Thursday, and conditions are expected to worsen this winter across much of the Southwest and South. Mike Halpert, deputy director of the Climate Prediction Center, a part of the National Oceanic and Atmospheric Administration, said a lack of late-summer rain in the Southwest had expanded “extreme and exceptional” dry conditions from West Texas into Colorado and Utah, “with significant drought also prevailing westward through Nevada, Northern California and the Pacific Northwest.” Much of the Western half of the country is now experiencing drought conditions and parts of the Ohio Valley and the Northeast are as well, Mr. Halpert said during a teleconference announcing NOAA’s weather outlook for this winter. This is the most widespread drought in the continental United States since 2013, he said, covering more than 45 percent of the Lower 48 states. “The winter forecast doesn’t bode well,” Mr.

The Sisyphean Solitude of a Migrant Shepherd Some films don’t need words. El Desierto is one of them. Carly and Jared Jakins’s award-winning short documentary, premiering on The Atlantic today, follows a lone migrant worker as he shepherds thousands of sheep in the Great Basin desert amid a formidable drought. Without a single line of dialogue, the film’s imagery speaks volumes about the isolating plight of America’s migrant workers and the looming specter of climate change. The co-directors, who are married, grew up in the Great Basin, an arid expanse of nearly 190,000 square miles in the western United States. Despite the fact that they were both raised in a wool-growing community, it wasn’t until adulthood that they became aware of the crucial role migrant workers play in the sheep-farming industry.

Rep. Ilhan Omar Rep. Ilhan Omar pushed back Tuesday night on Republican attacks after her remarks calling for the "dismantling" of U.S. systems of racism and oppression were characterized as un-American and dangerous by Fox News host Tucker Carlson, Republican House Minority Leader Kevin McCarthy, and other right-wing extremists. "It is telling that a black woman discussing systematic oppression is so triggering to the right," Omar tweeted as performative conservative outrage over her remarks increased through the evening.

Sun activity is waking up click 2x The Sun has begun a new cycle. Experts from NASA and the National Oceanic and Atmospheric Administration (NOAA) said Tuesday that our star has begun Solar Cycle 25 after an uptick in activity on its surface. It follows a deep “solar minimum” in late 2019, with NASA and NOAA reporting that Solar Cycle began in December 2019.

Himalayan glacier melting doubled since 2000, spy satellites show The melting of Himalayan glaciers has doubled since the turn of the century, with more than a quarter of all ice lost over the last four decades, scientists have revealed. The accelerating losses indicate a “devastating” future for the region, upon which a billion people depend for regular water. The scientists combined declassified US spy satellite images from the mid-1970s with modern satellite data to create the first detailed, four-decade record of ice along the 2,000km (1,200-mile) mountain chain. The analysis shows that 8bn tonnes of ice are being lost every year and not replaced by snow, with the lower level glaciers shrinking in height by 5 meters annually. The study shows that only global heating caused by human activities can explain the heavy melting. In previous work, local weather and the impact of air pollution had complicated the picture.

Where to Stream 11 Essential Ken Burns Documentaries - NYT Watching Watching is The New York Times’s TV and film recommendation newsletter and website. Ken Burns is going to war again. On Sept. 17, he and his frequent collaborator Lynn Novick will return to PBS with “The Vietnam War,” a 10-part, 18-hour documentary exploring the conflict.