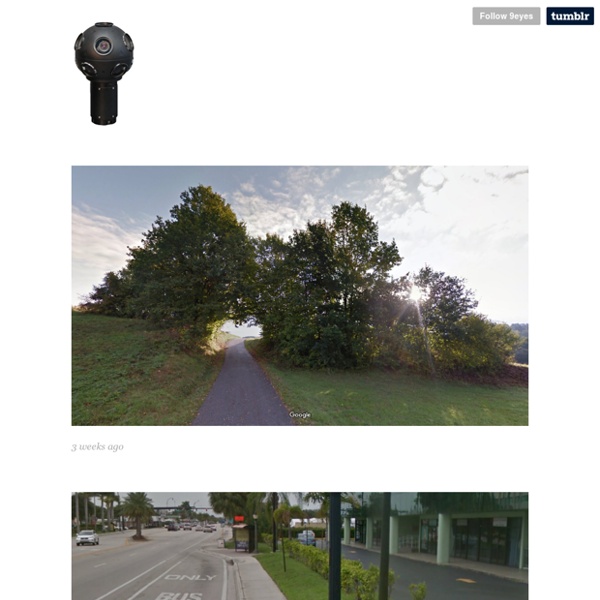 Molly Dilworth - projects August 2010, Google Earth view of 16 Manhattan Avenue, Brooklyn NY Paintings for Satellites I have an inclination to work with materials that have had an obvious life before I use them; it's a challenge and a pleasure to make something from nothing. In the last year my practice has grown out of the studio in the form of large-scale rooftop paintings for Google Earth. This project uses materials from the waste stream (discarded house paint) to mark a physical presence in digital space. My work is generally concerned with human perception of current conditions; the Paintings for Satellites are specifically concerned with the effects of the digital on our physical bodies.

Woman Shoots 'Anti-Selfies' by 'Dying' at Famous Landmarks When “normal” people visit famous landmarks these days, they commonly pull out their phones and snap a selfie to keep as a memory of being there. Artist Stephanie Leigh Rose does something different: she shoots “anti-selfies” of herself “dying.” Rose says the project, titled STEFDIES, is a photographic performance art series. “STEFDIES is a photographic performance art series that chronicles a life,” Rose writes. “Each photo is an ‘anti-selfie’ that strives to get back to the roots of what a photograph was intended to be: a captured moment in time.” Rose says that each photo is spontaneous without advance planning and preparation.

Sustainable House With Raw Stone Exterior Camel Quarry House is built on the footprint of the burnt out ruin of the original house. The site features great views of natural landscape and blends with it very well thanks to the exterior done in raw stones combined with several wood inserts. Its form is simple – a rugged face reflecting the quarry and estuary and a smoother façade facing the more sheltered, rural landscape. The new house is an informal, practical and low energy family home. It uses sustainable sources of energy that includes ground source heat pumps and solar panels concealed in the roof.

Film on the Fringe: 10 Intriguing Outsider Art Documentaries Jon Foy’s fascinating and unexpectedly personal documentary Resurrect Dead: The Mystery of the Toynbee Tiles hits DVD today. The film explores the strange urban mystery surrounding hundreds of tiles adorned with cryptic, metaphysical messages found across the U.S. and South America, which have perplexed people since the 1980s. Other films have examined the unexpected and unrecognized genius, strange pathology, and obsessively creative works of outsider artists in similarly intriguing ways. Many of the documentaries themselves have taken a low-fi approach to their portrayal, creating a similar mood to the works being investigated. Others come from a straight documentary angle, but all are compelling portraits. Head past the break to check out other outsider documentaries that introduce some of art and music’s most expressive creatives on the fringe.

Google – The first Google image for every word in the dictionary If a picture says more than a thousand words – and current internet dynamics tend to agree – what would a visual guide to the English vocabulary, contemporary and ‘webresentative’, look like? Ben West and Felix Heyes, two artists and designers from London (UK), found out when they replaced the 21,000 words found in your everyday dictionary with whatever shows up first for each word in Google’s image search. Behold Google – a 1240 page behemoth of JPGs, GIFs and PNGs in alphabetical order. “We used two PHP scripts my brother Sam wrote for us,” says Ben about the process in an email. “The first one takes a text list of dictionary words and downloads each image in sequence, and the second lays them out into columns and outputs a PDF.”

reuben wu uses drone LEDs to illuminate bolivia's remote landscapes combining drone technology with the latest in photography, reuben wu captures dreamlike images of remote locations. the chicago-based photographer uses the piloted aircrafts to create aerial light sources, illuminating views for his ongoing series lux noctis. images courtesy of reuben wu / phase one ‘when I first started using drone lights in my photography, I just wanted to shoot landscapes at night and needed something to light the scene,’ wu explains. ‘I didn’t include the actual light paths. but then I noticed how the different shapes created by the light interacted with the landscape and decided to keep them in the final image. now I see it as a way to involve myself with the landscape, as the personal mark I add to a specific scenery.’ using the drones to create light paths, wu constructs geometric shapes that appear like halos hovering over the landscape. he uses them to illuminate inaccessible places like mountains, valleys and other remote locations. video by phase one

House with Exterior Made Of Clinker Bricks and Wood This house has an exterior which is made of combination of clinker bricks and African teak wood. It is located near to Moscow, Russia, so the climate could be tough there. Even though there are plenty of snow during winters the house has flat roof and a lot of windows. There are several memorable elements of interior design you could find interesting. First of all there is a transparency glass staircase that gives a sense of soaring when you’re step up the stairs. 50 Great Works of Video Art That You Can Watch Online There are several reasons why video art is underexposed. Part of it has to do with the hard-to-shake reputation that video art is just too campy and esoteric — an opinion espoused by Jack Donaghy and anyone else who believes that art is exclusively paintings of men on horses. Another reason is the attitude that of a lot of influential, opinionated video artists share: they simply aren’t comfortable offering their wares to just anyone, and would rather sell the things they’ve made on glitzy-looking DVDs to a few collectors and museums, as they would a painting or a sculpture.

Googlegeist: Mirrors Behind the Curtain (Simulacrum) Tuesday, 22 January 2013 Smart Objects is excited to share the launch of Googlegeist: Mirrors Behind the Curtain (Simulacrum) — This past week a Google photographer was paid to virtualize the gallery space—with Google Museum View screenshots displayed (of Google's 9 eyed camera caught in mirrors)—and it was recently approved and uploaded to Google Street View (Business View).

If Birds Left Tracks in the Sky, They’d Look Like This This story appears in the January 2018 issue of National Geographic magazine. If birds left tracks in the sky, what would they look like? For years Barcelona-based photographer Xavi Bou has been fascinated by this question. Just as a sinuous impression appears when a snake slides across sand, he imagined, so must a pattern form in the wake of a flying bird.