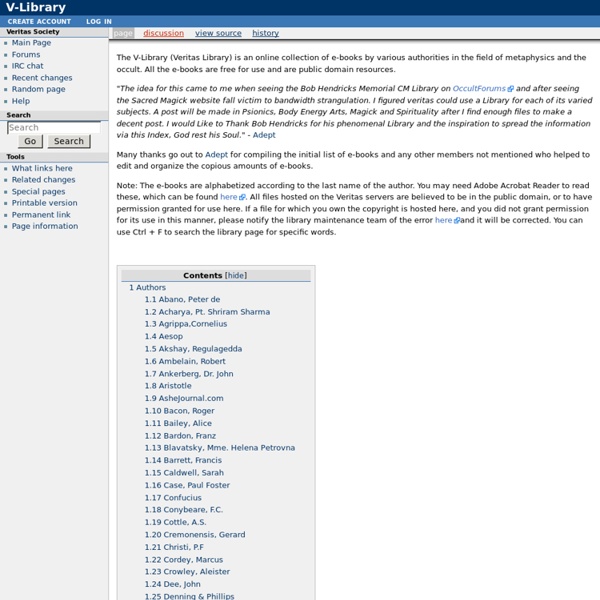 The V-Library (Veritas Library) is an online collection of e-books by various authorities in the field of metaphysics and the occult. All the e-books are free for use and are public domain resources. "The idea for this came to me when seeing the Bob Hendricks Memorial CM Library on OccultForums and after seeing the Sacred Magick website fall victim to bandwidth strangulation. I figured veritas could use a Library for each of its varied subjects. A post will be made in Psionics, Body Energy Arts, Magick and Spirituality after I find enough files to make a decent post. I would Like to Thank Bob Hendricks for his phenomenal Library and the inspiration to spread the information via this Index, God rest his Soul." - Adept Many thanks go out to Adept for compiling the initial list of e-books and any other members not mentioned who helped to edit and organize the copious amounts of e-books. Note: The e-books are alphabetized according to the last name of the author. Authors Abano, Peter de Aesop Related:  Spiritual Anarchy • occult

Fragments of Empedokles Fragments and Commentary The First Philosophers of Greece(London: K. Paul, Trench, Trubner, 1898) Arthur Fairbankseditor and translator Hanover Historical Texts ProjectScanned and proofread by Aaron Gulyas, May 1998Proofread and pages added by Jonathan Perry, March 2001Proofread and validated by Michael Stewart, June 2013 Fragments of EmpedoklesTranslation: Book ITranslation: Book IITranslation: Book IIIOn PurificationsPassages from Plato relating to EmpedoklesPassages in Aristotle referring to EmpedoklesPassages in Diels' 'Doxographi Graeci' relating to EmpedoklesList of Abbreviations [Page 157] EMPEDOKLES, son of Meton, grandson of an Empedokles who was a victor at Olympia, made his home and Akragas in Sicily. Literature:—Sturz, Emped. vita et phil. carm. rell. Note. [Page 158] [Page 159] Translation. 1. 2. 11. [Page 160] [Page 161] well esteemed compel me to pluck them from mortal hands, on condition that I speak boldly more than is holy and only then sit on the heights of wisdom. 19. 24. 33.

Online Scans of Rare & Antique Metaphysical Books pages 1-13 'The Path' and pages 14-19 'Meaning of the Symbol' Voice of Isis - by the Order of Christian Mystics - 1926 Voice of ISIS: CHAPTER XXXIV. The Meaning of the Symbol The Seal consists of a double triangle inscribed in a circle, with an open Eye in the center and three five pointed stars in the spaces between the sides of the triangle and the circle. The circle represents Boundless Space and limitless Time in Eternity. In one sense it is the circle of the Zodiac (the pathway of our solar system) from the twelve Gates or Houses of which issues the radiant light of The Christos represented as focused in the center of the Open Eye. Thus the All-seeing Eye (the Absolute) sheds its seven-fold creative rays within its creations.

The Alchemist's Handbook CHAPTER V p.47 How are herbs related to the stars? Can such a thing be true? Scientists will shake their heads in disgust. In plant and mineral life, organic and inorganic minerals exist as separate groups. Perhaps science someday will take the time to investigate in these uncharted areas and experiment on a far broader base than has been the case so far. The following is a condensed tabulation of herbs listed according to the planetary influence which affects each of them, as claimed by ancient tradition. In concluding this condensed table of herbs and corresponding Planetary influences, it will be interesting to add a few further observations. Is there anyone capable of answering why the chickweed flowers are open and upright from nine in the morning until noon? There is no point in going any further into this matter here as sufficient material can be found in the following pages to help in the assimilation of the spiritual essence for further transmutation. The Sun rules the heart.

Notes on Kabbalah Notes on Kabbalah Release 3.0, 7th. July 2001 I had originally intended to publish these notes as a conventional paper book, but decided against it. I am currently receiving 1000 visitors per month to this page alone. An initial print run for a book of this nature might be 5,000 copies, and take years to sell. Then there is the altruism, which I genuinely (no gagging) believe in. Please note the license conditions, also on the fly-leaf. The book is in Abobe Acrobat PDF format. It has been specially formatted for printing on A4 paper. DownLoad Here (1.9 Mbytes) Release 2.0 These are the original text files circulated on the Usenet in 1992. 7th. Return to the Hermetic Kabbalah Home Page

Global One TV - Inward Revolution brings Outward Revolution The Magickal Review The Magickal Review is here to provide high quality material, rather than large quantities of material, from the esoteric arts and sciences. We publish electronic editions of essays, poetry and classic works on an occasional basis, which have (in the past) concentrated on Enochian and Thelemic topics. The editorial approach is sceptical and open-minded, accepting that whatever value may inhere in magickal or “occult” literature can only be found through critical, non-dogmatic and circumspect study, not omitting serious practical experimentation. As noted, we dislike deadlines and consequently publish only occasionally.

Riding the Spiral JOHN007DEE WORLDWIDE John007Dee Worldwide has been designed to be a complete study guide to the corpus of Dee materials. It is hoped that this site will prove useful to the scholar who wishes to have all of the Dee materials on one page, and to the practicing magickian who wishes to gain or share new insight into the safe and coherant practice of Enochian Magick. NOTICE: The proprietary tags used by Windows Explorer do not allow John007Dee Worldwide to be viewed in its intended format. The viewer is advised to choose another browser. * CATALOGUE OF MANUSCRIPTS : The books and manuscripts of John Dee and Edward Kelley, with various related writings * CHRONOLOGY : A timeline of significant events in the lives of John Dee and Edward Kelley * LIBER 1250 : An Enochian numericon in 3 parts, using Dee's own preferred system of gematria * ARTICLES AND COMMENTARY : New writings and observations on the works of John Dee and Edward Kelley * NEW!