Let’s lose the ADHD label and find the child 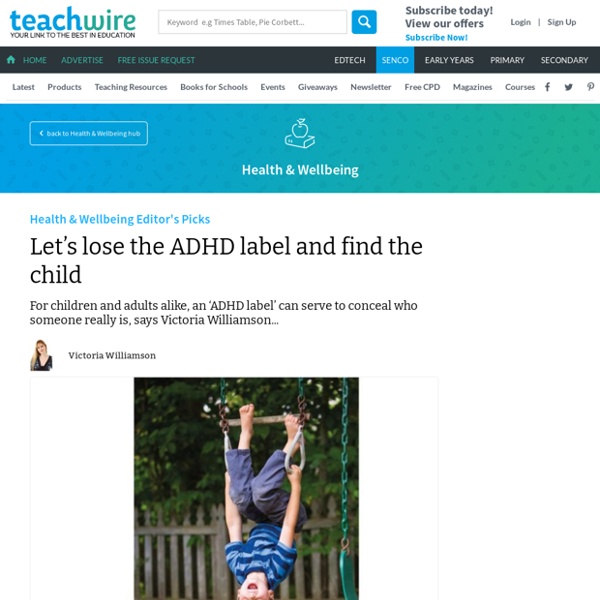 When I trained as a primary school teacher 15 years ago, these were some of the words used to describe children with ADHD: ‘Difficult.’ ‘Challenging.’ ‘Disruptive.’ There were others, whispered by harassed-looking teachers in the staffroom or concerned parents at the school gates, but none seemed to be positive. When I got my first ‘real’ class to teach, and saw that some of the children came with the dreaded ‘ADHD’ label attached, I approached the new term with butterflies the size of dragons in my stomach. But here’s what it took me a few more years to learn… Michael wasn’t ‘difficult’ He struggled with impulsiveness, often shouting out in class, talking over other children and getting into arguments during games when he found it hard to wait his turn. Chloe wasn’t ‘challenging’ Saleem wasn’t ‘disruptive’ Change perceptions Three very different children, with very different personalities and passions, but all with two things in common – their ‘ADHD’ labels and lack of self-esteem.

Observation, Assessment and Planning - Early Years Matters The EYFS Profile summarises and describes children’s attainment at the end of the EYFS. It is based on on-going observation and assessment in the three prime and four specific areas of learning, and the three learning characteristics, set out below: The prime areas of learning: • communication and language • physical development This ‘Kindness Curriculum’ Is Free And Should Be Used In Every Classroom Imagine living in a world that valued kindness enough to teach it along with academics. Educators would teach kids to manage their emotions in addition to standard curriculum such as math and science. Sounds pretty amazing, doesn’t it?

The Power (and Peril) of Praising Your Kids What do we make of a boy like Thomas? Thomas (his middle name) is a fifth-grader at the highly competitive P.S. 334, the Anderson School on West 84th. Slim as they get, Thomas recently had his long sandy-blond hair cut short to look like the new James Bond (he took a photo of Daniel Craig to the barber). Unlike Bond, he prefers a uniform of cargo pants and a T-shirt emblazoned with a photo of one of his heroes: Frank Zappa. Thomas hangs out with five friends from the Anderson School. 5 ways to win over parents to the importance of play in international EYFS "I’m not sending my child to school for them play all day. They should be learning properly!" Have you ever overheard comments like this? Or read something similar on social media? Perhaps your teaching methods are questioned during parent-teacher conferences? Wherever in the world you teach, play-based learning can be met with scepticism.

Five essential tips for teaching very young children English Are you daunted by the prospect of teaching English to very young children? Sheona Gilmour, lead educator on our new online course for teachers and parents, offers a few tips. Teaching English to very young children can be challenging, especially if you haven't done any training for the early years classroom. 21 of the Best Early Years Books for International Friendship Day We know that skills like empathy aren’t fully developed until later in a child’s life, which is why there are so many stories on friendship and how to treat people aimed at Early Years. International Friendship Day, then, is a great opportunity to share some of these amazing books with your children. It does, however, fall on Sunday 30 July. So celebrating on the day itself is going to be difficult, doubly so for Reception classes who are on summer holidays. Here are our picks for some top tales that touch on various aspects of friendship that kids will love.

50 Tongue Twisters to improve pronunciation in English Tongue twisters are a great way to practice and improve pronunciation and fluency. They can also help to improve accents by using alliteration, which is the repetition of one sound. They’re not just for kids, but are also used by actors, politicians, and public speakers who want to sound clear when speaking. Below, you will find some of the most popular English tongue twisters. Say them as quickly as you can.

The Key to Effective Classroom Management It’s a daunting but all-too-common sight for many teachers: A classroom full of rowdy students who are unable to focus on the lesson. Classroom management techniques may get things back on track, but valuable time has already been lost. Many experienced teachers know that making meaningful connections with students is one of the most effective ways to prevent disruptions in the first place, and a new study set out to assess this approach. In classrooms where teachers used a series of techniques centered around establishing, maintaining, and restoring relationships, academic engagement increased by 33 percent and disruptive behavior decreased by 75 percent—making the time students spent in the classroom more worthwhile and productive. “Strong teacher-student relationships have long been considered a foundational aspect of a positive school experience,” explains Clayton Cook, the lead author of the study and a professor at the University of Minnesota. Relationship reflection form

One theory all teachers with disruptive children should know about Imagine a classroom where children are unable to wait their turn or stay focused on their work. They are easily distracted, cannot remember basic instructions or hold enough information in their head to solve problems – skills teachers rely on in order to teach successfully. These behavioural issues are all examples of problems that can arise from attachment issues – based on the relationship between children and their main caregiver. Attachment theory is now one of the world’s most well-researched theories about human development. It was first proposed by the 20th-century British psychiatrist John Bowlby, who considered that children needed to develop a secure attachment with their main caregiver via sufficiently consistent, responsive, sensitive, appropriate and predictable care and support.

MIT Brain Study: Back-And-Forth Talk Key To Developing Kids' Verbal Skills New MIT research finds that for children's brain development, parents don't just need to talk to their kids — it's important to talk with them, in back-and-forth exchanges. "What we found is, the more often parents engaged in back-and-forth conversation with their child, the stronger was the brain response in the front of the brain to language," said cognitive neuroscience professor John Gabrieli. Story continues below Most Viewed Stories Don't Expect Toddlers To Behave Consistently — They Literally Can't One day, when my oldest daughter was not quite 2, she wouldn’t sit still to let me change her diaper. Squirrelly and writhing, she made a game out of staying half naked. She wasn’t fussing about it or anything — in fact, she was giggling maniacally. The problem was that we were running late. Nothing I did seemed to faze her.

KQED Public Media for Northern CA Babies and toddlers raised in supportive and caring home environments tended to do better on standardized tests later on, and they were more likely to attain higher degrees as adults. They were also more likely to get along with their peers and feel satisfied in their romantic relationships. "It seems like, at least in these early years, the parents' role is to communicate with the child and let them know, 'I'm here for you when you're upset, when you need me. And when you don't need me, I'm your cheerleader,' " says Lee Raby, a psychologist and postdoctoral researcher at the University of Delaware who led the study. Raby used data collected from 243 people who participated in the Minnesota Longitudinal Study of Risk.