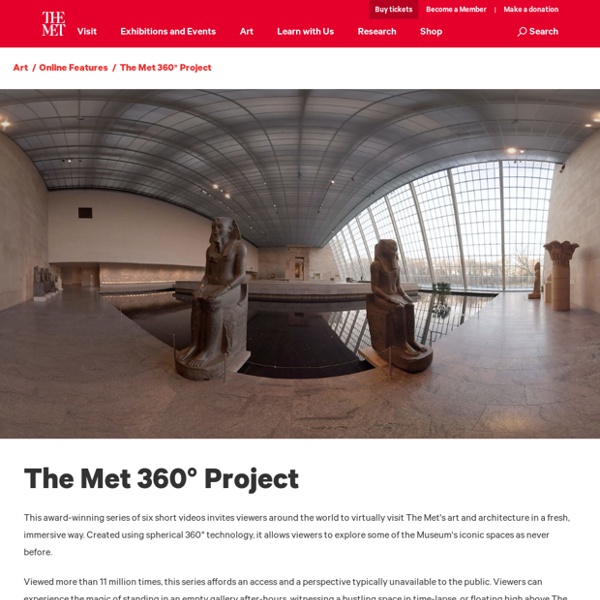 This award-winning series of six short videos invites viewers around the world to virtually visit The Met's art and architecture in a fresh, immersive way. Created using spherical 360° technology, it allows viewers to explore some of the Museum's iconic spaces as never before. Viewed more than 11 million times, this series affords an access and a perspective typically unavailable to the public. Viewers can experience the magic of standing in an empty gallery after-hours, witnessing a bustling space in time-lapse, or floating high above The Met Cloisters for a bird's-eye view. We strung cables, removed protective covers from works of art, and rigged cameras up high, all to allow viewers to explore The Met as never before. Get a behind-the-scenes look at how we created the videos in a Digital Underground article written by Director/Producer Nina Diamond. Videos You may view these videos on YouTube on multiple devices: Be sure to turn up the volume to hear the music, too. Great Hall Awards

Leopold Museum, Vienna, Autriche It took five decades to compile the collection. In 2001 it found its definite location. Together with the Republic of Austria and the Austrian National Bank, the collector Dr. Rudolf Leopold, who died in 2010 at the age of 85, consolidated his collection, which is now exhibited in a museum built by the Austrian state, into a private foundation. It is the largest and most visited museum in the newly created Museums Quartier. MoMA The Museum of Modern Art, New York, United States Founded in 1929, The Museum of Modern Art (MoMA) in midtown Manhattan was the first museum devoted to the modern era. Today MoMA’s rich and varied collection offers a panoramic overview of modern and contemporary art, from the innovative European painting and sculpture of the 1880s to today's film, design, and performance art. From an initial gift of eight prints and one drawing, the collection has grown to include over 150,000 paintings, sculptures, drawings, prints, photographs, architectural models and drawings, and design objects; approximately 22,000 films and four million film stills; and, in its Library and Archives, over 300,000 books, artist books, and periodicals, and extensive individual files on more than 70,000 artists. Collection highlights include Claude Monet’s Water Lilies, Vincent van Gogh’s The Starry Night, and Pablo Picasso’s Les Demoiselles d'Avignon, along with more recent works by Andy Warhol, Elizabeth Murray, Cindy Sherman, and many others.

How to explore the British Museum from home When we first opened our doors in 1759, we proudly declared ourselves a place for ‘all studious and curious persons’. It’s a mission we’re still dedicated to – even if you can’t visit us in person yet. With that in mind, we’d like to share the many ways in which you can explore our galleries and the collection online. So, here are 11 ways for you to stay curious, keep learning, and experience over two million years of human history – all without stepping out your front door. 1.

Alte Nationalgalerie, Berlin The Alte Nationalgalerie is the original home of the Nationalgalerie, whose collections today are divided between the Neue Nationalgalerie, the Hamburger Bahnhof – Museum für Gegenwart – Berlin, the Friedrichswerdersche Kirche, Museum Berggruen and the Sammlung Scharf-Gerstenberg. The idea of establishing a cultural and educational centre across from the Berlin Palace dates back to the time of Friedrich Wilhelm IV, who dreamt of creating a "sanctuary for art and science" on the site. The basic architectural concept for the Alte Nationalgalerie – a temple-like building raised on a plinth decorated with motifs from antiquity – came from the king himself. The building was designed by Friedrich August Stüler, a student of Schinkel who also designed the Neues Museum. It was completed after Stüler’s death by another of Schinkel’s students, Johann Heinrich Strack. Header image © Staatliche Museen zu Berlin / David von Becker

Halloween Flying witches, pumpkin lanterns, trick or treat ... What do you know about Halloween? Here are some Halloween facts to get started. Halloween is celebrated on 31 October. This isn’t a public holiday in Britain. Galerie des Offices, Florence The Uffizi was designed by Giorgio Vasari in 1560 for Cosimo I de'Medici to house the Granducal Magistratures of Tuscany. Over time, the top floor loggia became an exhibition of the dynastic collection of ancient sculpture, artwork and artifacts. The eastern wing of the building incorporated the ancient Florentine church of San Pier Scheraggio and the wing to the west connected with two existing buildings, the Mint and the Loggia dei Lanzi. Vasari conceived an architectural module to be repeated all along the building: a portico flanked by two pillars, with niches on the ground floor and three windows on the upper story. In 1565, on the occasion of the marriage of his son Francesco to Giovanna d'Austria, Cosimo I asked Vasari to design a raised passageway connecting Palazzo Vecchio with Palazzo Pitti, the new residence of the family.

What are the rules of handball? - Vidéo Langues vivantes In a game of handball, 2 teams play with a round ball. The team that scores the most goals wins. This sport is played by millions of people all over the world. There are many competitions, for amateurs and professionals. Musée du quai Branly In the heart of Paris's museum land, neighbouring the Louvre and the Musée d’Orsay, a few minutes from the Grand and Petit Palais, the Palais de Tokyo and the Musée d’art moderne de la Ville de Paris, the Musée du quai Branly - Jacques Chirac has an exceptional location on the banks of the River Seine, at the foot of the Eiffel Tower. The arts of Africa, Oceania, Asia, and the Americas now form part of the historical and artistic grand tour of the capital. The Musée du quai Branly - Jacques Chirac is an innovative cultural institution - museum, educational and research centre, and public living space all in one. Built on one of the last available sites in the heart of Paris, the architectural design of this original project is the work of Jean Nouvel. A museum of non-Western arts During the 20th century, non-Western arts started to be seen in museum collections.

Paper Roll Flowers All activities should be supervised by an adult. By using this site, you agree to our Terms of Use. This post may contain affiliate links.