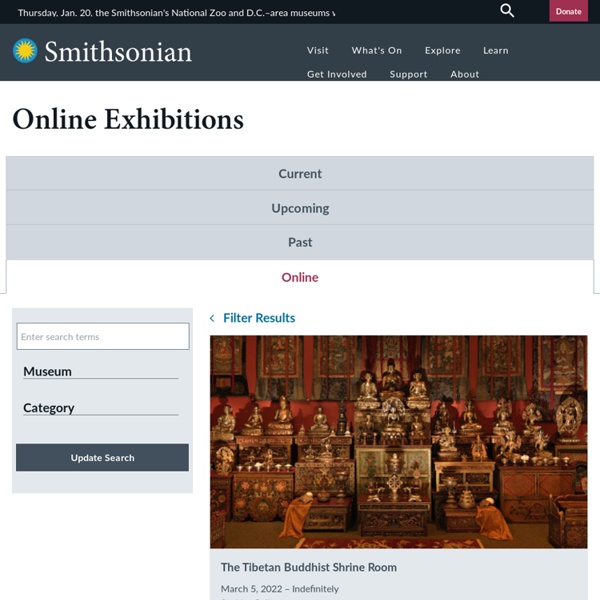 Guided Tour of The American Museum of Photography. Le site est en anglais, mais les photographies sont comprises dans toutes les langues que vous parlez : vous pouvez retrouver toute l’histoire américaine de la photographie, en cliquant sur les différents We bill ourselves as "A Museum Without Walls... For An Art Without Boundaries." Even though we have no walls, we do have "floors," separate areas for different activities. At the bottom of most pages, you'll find a navigation bar that will let you choose our Exhibitions floor, our Main Entrance floor, our Research Center or our Museum Shops. Just click on the place you want to visit.

The Met 360° Project This award-winning series of six short videos invites viewers around the world to virtually visit The Met's art and architecture in a fresh, immersive way. Created using spherical 360° technology, it allows viewers to explore some of the Museum's iconic spaces as never before. Viewed more than 11 million times, this series affords an access and a perspective typically unavailable to the public. Viewers can experience the magic of standing in an empty gallery after-hours, witnessing a bustling space in time-lapse, or floating high above The Met Cloisters for a bird's-eye view.

The State Hermitage Museum, St. Petersburg, Russie — Google Arts & Culture State Hermitage is one of the largest museums in the world. Its exhibitions include over 3 million exhibits representing Antiquity, Western Europe, Middle East, Russia and many more epochs, countries and regions. Its foundation dates back to 1764, when Catherine the Great purchased a big collection of Western European paintings. The museum consists of five buildings located in the historical center of St.

Alte Nationalgalerie, Staatliche Museen deBerlin :l’un des plus beaux musées de la capitale allemande. Retrouvez la visite virtuelle et toutes les collections: Friedrich, Menzel, Manet. The Alte Nationalgalerie is the original home of the Nationalgalerie, whose collections today are divided between the Neue Nationalgalerie, the Hamburger Bahnhof – Museum für Gegenwart – Berlin, the Friedrichswerdersche Kirche, Museum Berggruen and the Sammlung Scharf-Gerstenberg. The idea of establishing a cultural and educational centre across from the Berlin Palace dates back to the time of Friedrich Wilhelm IV, who dreamt of creating a "sanctuary for art and science" on the site. The basic architectural concept for the Alte Nationalgalerie – a temple-like building raised on a plinth decorated with motifs from antiquity – came from the king himself. The building was designed by Friedrich August Stüler, a student of Schinkel who also designed the Neues Museum. It was completed after Stüler’s death by another of Schinkel’s students, Johann Heinrich Strack. Header image © Staatliche Museen zu Berlin / David von Becker

Leopold Museum, Vienna, Autriche It took five decades to compile the collection. In 2001 it found its definite location. Together with the Republic of Austria and the Austrian National Bank, the collector Dr. Rudolf Leopold, who died in 2010 at the age of 85, consolidated his collection, which is now exhibited in a museum built by the Austrian state, into a private foundation. It is the largest and most visited museum in the newly created Museums Quartier. MASP - Museu de Arte de São Paulo Assis Chateaubriand, São Paulo, Brésil — Google Arts & Culture The Museu de Arte de São Paulo is a private, nonprofit museum founded by Brazilian businessman Assis Chateaubriand, in 1947, as Brazil’s first modern museum. Chateaubriand invited Italian art dealer and critic Pietro Maria Bardi to serve as MASP’s director, a position he held for nearly forty-five years. Acquired through donations from the local society, MASP’s first artworks were selected by Bardi and became the most important collection of European art in the Southern Hemisphere. Today, MASP’s collection contains more than 8.000 works, including paintings, sculptures, objects, photographs, and costumes from a wide range of periods, encompassing art from Africa, Asia, Europe, and the Americas.