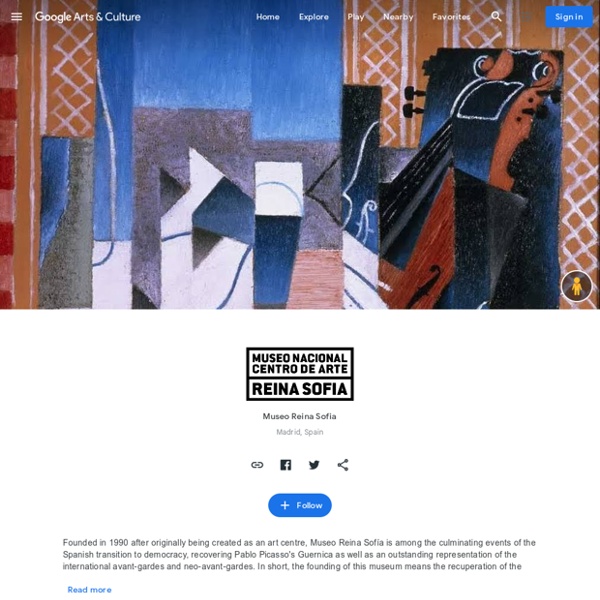 Founded in 1990 after originally being created as an art centre, Museo Reina Sofía is among the culminating events of the Spanish transition to democracy, recovering Pablo Picasso's Guernica as well as an outstanding representation of the international avant-gardes and neo-avant-gardes. In short, the founding of this museum means the recuperation of the experience of modernity previously missing from the Spanish context and the opportunity to try out new models of narration from a periphery that is neither lateral nor derivative, but is rather an entry way for new stories, historiographic models and artistic episodes that tip the balance of the orthodox canon of the main museums. The institution no longer considers its task to be simply the transmission of culture. Instead, it works with other agents and institutions, creating networks and alliances that strengthen the public sphere and position Museo Reina Sofía as a reference of prime importance in the geopolitical South.

Alte Nationalgalerie, Berlin The Alte Nationalgalerie is the original home of the Nationalgalerie, whose collections today are divided between the Neue Nationalgalerie, the Hamburger Bahnhof – Museum für Gegenwart – Berlin, the Friedrichswerdersche Kirche, Museum Berggruen and the Sammlung Scharf-Gerstenberg. The idea of establishing a cultural and educational centre across from the Berlin Palace dates back to the time of Friedrich Wilhelm IV, who dreamt of creating a "sanctuary for art and science" on the site. The basic architectural concept for the Alte Nationalgalerie – a temple-like building raised on a plinth decorated with motifs from antiquity – came from the king himself.

National Museum of Modern and Contemporary Art, Séoul, Corée du Sud Since opening its door in 1969, the National Museum of Modern and Contemporary Art (MMCA), Korea has lived through the history of Korean art. In the process, MMCA established itself as a representative institution of Korean modern art. The museum’s four branches, including Gwacheon (opened in 1986), Deoksugung (opened in 1998), Seoul (opened in 2013), and Cheongju (expected to open in 2017), each in its own way, will continue to carry out MMCA’s commitment to the art and culture of Korea by enriching the first-hand cultural experience of the viewing public. Boasting a superb natural landscape surrounding the site, MMCA Gwacheon will be devoted to various genres of visual arts such as architecture, design, and crafts. Located within a historical site, MMCA Deoksugung will showcase modern art from Korea and overseas.

Leopold Museum, Vienna, Autriche It took five decades to compile the collection. In 2001 it found its definite location. Together with the Republic of Austria and the Austrian National Bank, the collector Dr. Rudolf Leopold, who died in 2010 at the age of 85, consolidated his collection, which is now exhibited in a museum built by the Austrian state, into a private foundation. It is the largest and most visited museum in the newly created Museums Quartier. The main focus of the collection lies on Austrian art of the first half of the 20th century, including major paintings and drawings by Egon Schiele and Gustav Klimt. National Museum of Women in the Arts, Washington, D.C., États-Unis Founded in 1981 and opened in 1987, the National Museum of Women in the Arts (NMWA) is the only museum solely dedicated to celebrating the achievements of women in the visual, performing and literary arts. The museum’s collection features 5,000 works from the 16th century to the present created by more than 1,000 artists, including Mary Cassatt, Frida Kahlo, Alma Thomas, Lee Krasner, Louise Bourgeois, Chakaia Booker, and Nan Goldin, along with special collections of 18th-century silver tableware, botanical prints, and artists’ books. NWMA brings recognition to the achievements of women artists of all periods and nationalities by exhibiting, preserving, acquiring, and researching art by women and by teaching the public about their accomplishments.