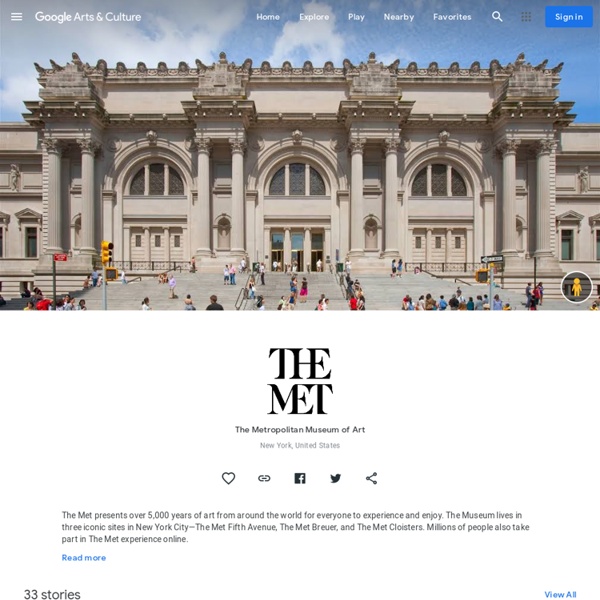 Guided Tour of The American Museum of Photography. Le site est en anglais, mais les photographies sont comprises dans toutes les langues que vous parlez : vous pouvez retrouver toute l’histoire américaine de la photographie, en cliquant sur les différents We bill ourselves as "A Museum Without Walls... For An Art Without Boundaries." Even though we have no walls, we do have "floors," separate areas for different activities. At the bottom of most pages, you'll find a navigation bar that will let you choose our Exhibitions floor, our Main Entrance floor, our Research Center or our Museum Shops.

Predict Old Faithful - Teachers Grade Level: Upper Elementary: Third Grade through Fifth Grade Subject: Musée du quai Branly - Jacques Chirac, Paris, France In the heart of Paris's museum land, neighbouring the Louvre and the Musée d’Orsay, a few minutes from the Grand and Petit Palais, the Palais de Tokyo and the Musée d’art moderne de la Ville de Paris, the Musée du quai Branly - Jacques Chirac has an exceptional location on the banks of the River Seine, at the foot of the Eiffel Tower. The arts of Africa, Oceania, Asia, and the Americas now form part of the historical and artistic grand tour of the capital. The Musée du quai Branly - Jacques Chirac is an innovative cultural institution - museum, educational and research centre, and public living space all in one. Built on one of the last available sites in the heart of Paris, the architectural design of this original project is the work of Jean Nouvel.

A Guide to Coronavirus-Related Words To self-quarantine is “to refrain from any contact with other individuals for a period of time (such as two weeks) during the outbreak of a contagious disease usually by remaining in one's home and limiting contact with family members.” The verb is fairly recent, showing evidence of use only within the past 20 years or so. The noun has been in occasional use prior to this in the 20th century. Dr. Banks said further that the Federal authority invested in him in the matter of quarantine had not yet been exerted to its fullest, but that if persons continued to disregard his advice about self-quarantine, he would bring into service all of the power of compulsion at his command.— The New York Times, 10 Aug. 1916 (p. 1) Quarantine is currently most often found with the meaning of “a restraint upon the activities or communication of persons or the transport of goods designed to prevent the spread of disease or pests.”

Alte Nationalgalerie, Staatliche Museen deBerlin :l’un des plus beaux musées de la capitale allemande. Retrouvez la visite virtuelle et toutes les collections: Friedrich, Menzel, Manet. The Alte Nationalgalerie is the original home of the Nationalgalerie, whose collections today are divided between the Neue Nationalgalerie, the Hamburger Bahnhof – Museum für Gegenwart – Berlin, the Friedrichswerdersche Kirche, Museum Berggruen and the Sammlung Scharf-Gerstenberg. The idea of establishing a cultural and educational centre across from the Berlin Palace dates back to the time of Friedrich Wilhelm IV, who dreamt of creating a "sanctuary for art and science" on the site. The basic architectural concept for the Alte Nationalgalerie – a temple-like building raised on a plinth decorated with motifs from antiquity – came from the king himself. The building was designed by Friedrich August Stüler, a student of Schinkel who also designed the Neues Museum. It was completed after Stüler’s death by another of Schinkel’s students, Johann Heinrich Strack.

Virtual Field Trip to Ellis Island World War II and the Postwar Period The United States entered World War II in 1942. During the war, immigration decreased. MoMA The Museum of Modern Art, New York, United States Founded in 1929, The Museum of Modern Art (MoMA) in midtown Manhattan was the first museum devoted to the modern era. Today MoMA’s rich and varied collection offers a panoramic overview of modern and contemporary art, from the innovative European painting and sculpture of the 1880s to today's film, design, and performance art. From an initial gift of eight prints and one drawing, the collection has grown to include over 150,000 paintings, sculptures, drawings, prints, photographs, architectural models and drawings, and design objects; approximately 22,000 films and four million film stills; and, in its Library and Archives, over 300,000 books, artist books, and periodicals, and extensive individual files on more than 70,000 artists. Collection highlights include Claude Monet’s Water Lilies, Vincent van Gogh’s The Starry Night, and Pablo Picasso’s Les Demoiselles d'Avignon, along with more recent works by Andy Warhol, Elizabeth Murray, Cindy Sherman, and many others.

Frankenstein and Antony and Cleopatra in Your Living Room – Speakeasy News The next couple of free online streaming treats from the UK's National Theatre are Frankenstein and Shakespeare's Antony and Cleopatra. The National Theatre has been making filmed shows available at 8 p.m. French time every Thursday, and available for a week on demand. The next two fit brilliantly with Shine Bright LLCE File 2 Freaky Dreams and File 13 Staging Emotions. You can view the plays on the National's YouTube channel. For more information visit the NT site, but you may have to queue to get on due to high demand.

Museo Reina Sofia, Madrid, Espagne : histoire de l’art espagnol, mais aussi histoire de l’Espagne et de l’Europe, et encore : Guernica de Picasso ! Vous pourrez visiter le musée, du Palazio de Velazquèz au Palacio de cristal. Founded in 1990 after originally being created as an art centre, Museo Reina Sofía is among the culminating events of the Spanish transition to democracy, recovering Pablo Picasso's Guernica as well as an outstanding representation of the international avant-gardes and neo-avant-gardes. In short, the founding of this museum means the recuperation of the experience of modernity previously missing from the Spanish context and the opportunity to try out new models of narration from a periphery that is neither lateral nor derivative, but is rather an entry way for new stories, historiographic models and artistic episodes that tip the balance of the orthodox canon of the main museums. The institution no longer considers its task to be simply the transmission of culture. Instead, it works with other agents and institutions, creating networks and alliances that strengthen the public sphere and position Museo Reina Sofía as a reference of prime importance in the geopolitical South.