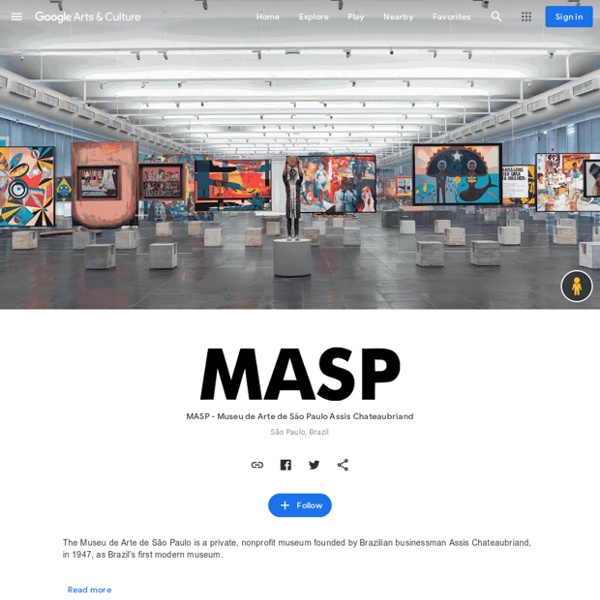 The Museu de Arte de São Paulo is a private, nonprofit museum founded by Brazilian businessman Assis Chateaubriand, in 1947, as Brazil’s first modern museum. Chateaubriand invited Italian art dealer and critic Pietro Maria Bardi to serve as MASP’s director, a position he held for nearly forty-five years. Acquired through donations from the local society, MASP’s first artworks were selected by Bardi and became the most important collection of European art in the Southern Hemisphere. Today, MASP’s collection contains more than 8.000 works, including paintings, sculptures, objects, photographs, and costumes from a wide range of periods, encompassing art from Africa, Asia, Europe, and the Americas. Besides the permanent exhibition of its collection, MASP organizes a compre­hensive program of temporary exhibitions, courses, and talks, as well as musical, dance, and theater presentations.

National Museum of Modern and Contemporary Art Since opening its door in 1969, the National Museum of Modern and Contemporary Art (MMCA), Korea has lived through the history of Korean art. In the process, MMCA established itself as a representative institution of Korean modern art. The museum’s four branches, including Gwacheon (opened in 1986), Deoksugung (opened in 1998), Seoul (opened in 2013), and Cheongju (expected to open in 2017), each in its own way, will continue to carry out MMCA’s commitment to the art and culture of Korea by enriching the first-hand cultural experience of the viewing public. Boasting a superb natural landscape surrounding the site, MMCA Gwacheon will be devoted to various genres of visual arts such as architecture, design, and crafts.

National Museum - New Delhi, New Delhi , Inde — Google Arts & Culture The National Museum, New Delhi as we see it today in the majestic building on the corner of Janpath and Maulana Azad Road is the prime museum in the country. The blue-print for establishing the National Museum in Delhi had been prepared by the Gwyer Committee set up by the Government of India in 1946. When an Exhibition of Indian Art consisting of selected artefacts from various museums of India, sponsored by the Royal Academy (London) with the co-operation of the Government of India and Britain, was on display in the galleries of Burlington House, London during the winter months of 1947-48, it was decided to display the same collection under a single roof in Delhi before the return of exhibits to their respective museums. Accordingly, the exibition was held in the state rooms of the Rashtrapati Bhawan, New Delhi in 1949, and it turned out to be a great success. In turn, the event proved responsible for the creation of National Museum.

Louvre Museum's Visitor Trails Here, Ingres transposed the antique theme of the female nude to the Near East, a place he had traveled to only in his dreams and the pretext for the sensual image of a naked woman in a harem—hence the title, The Large Odalisque—set against an exotic background. Until the end of his life, Ingres continued to paint exotic scenes and female nudes, one of his favorite subjects—as in The Turkish Bath—drawing on influences as diverse as Raphael, the Mannerists, and Persian miniatures. Whereas Ingres, like his master David, was a classical artist in terms of technique and his interest in antiquity, which he showed in other works, he distanced himself from this trend by giving priority to draftsmanship, pure lines, and sensual curves, distorting anatomical reality if necessary. This odalisque has three vertebrae too many. Likewise, her right breast and left leg are joined to the rest of the body in a curious fashion. How to get to the exit: This is the end of our trail.

Pergamon Pergamon or Pergamum, also referred to by its modern Greek form Pergamos, was a rich and powerful ancient Greek city in Mysia. It is located 26 kilometres from the modern coastline of the Aegean Sea on a promontory on the north side of the river Caicus and northwest of the modern city of Bergama, Turkey.During the Hellenistic period, it became the capital of the Kingdom of Pergamon under the Attalid dynasty in 281–133 BC, who transformed it into one of the major cultural centres of the Greek world. Many remains of its impressive monuments can still be seen and especially the outstanding masterpiece of the Pergamon Altar. The State Hermitage Museum, St. Petersburg, Russie — Google Arts & Culture State Hermitage is one of the largest museums in the world. Its exhibitions include over 3 million exhibits representing Antiquity, Western Europe, Middle East, Russia and many more epochs, countries and regions. Its foundation dates back to 1764, when Catherine the Great purchased a big collection of Western European paintings. The museum consists of five buildings located in the historical center of St.

Thyssen-Bornemisza Museo Nacional - Rembrandt and Amsterdam Portraiture, 1590 - 1670 For the first time in Spain, the museum is presenting an exhibition on Rembrandt’s activities as a portraitist, a genre in which the most important Dutch painter of the 17th century also reached the highest level. Together with around thirty nine of his portraits, the exhibition will include major examples by other artists active alongside him in Amsterdam during the Dutch Golden Age, with a total of 80 paintings, 16 prints and an etching plate, some never previously seen in Europe. When Rembrandt arrived in Amsterdam in the early 1630s the city already counted on portraitists such as Thomas de Keyser and Frans Hals - resident in the nearby city of Haarlem but with clients in the capital - who responded to a significant market demand for such works. Others continued to arrive after Rembrandt, such as Bartholomeus van der Helst, attracted by the possibility of securing commissions.

San Diego Zoo Safari Park Burrow In San Diego Zoo Global is home to a pair of burrowing owls in an off-exhibit breeding area. Viewers can observe these fascinating birds on this live cam—which provides views above ground, as well inside the birds' underground burrow, where eggs are incubated and chicks are raised. It's a wonderful opportunity to learn more about this charismatic species! Why We Care The western burrowing owl Athene cunciularia hypugaea in San Diego County is at risk of going locally extinct.