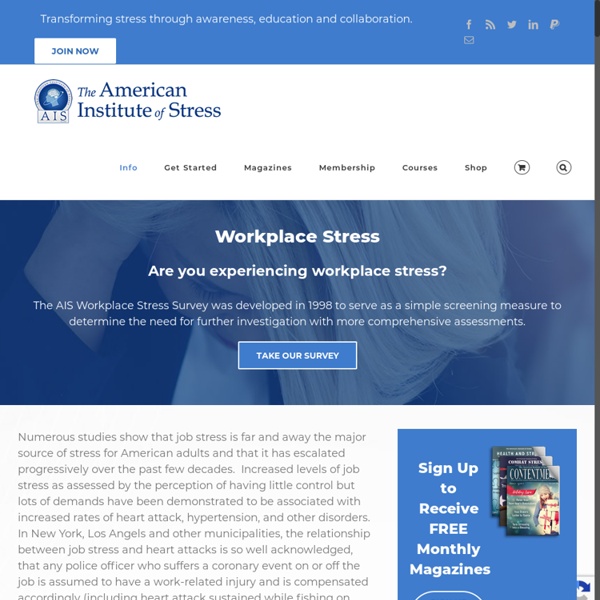 Although the Institute is often asked to construct lists of the “most” and “least” stressful occupations, such rankings have little importance for several reasons. It is not the job but the person-environment fit that matters. Some individuals thrive in the time urgent pressure cooker of life in the fast lane, having to perform several duties at the same time and a list of things to do that would overwhelm most of us — provided they perceive that they are in control. They would be severely stressed by dull, dead-end assembly line work enjoyed by others who shun responsibility and simply want to perform a task that is well within their capabilities. The stresses that a policeman or high school teacher working in an inner city environment are subjected to are quite different than those experienced by their counterparts in rural Iowa. Stress is a highly personalized phenomenon and can vary widely even in identical situations for different reasons.

Understanding Stress and How It Affects the Workplace Stress is normal. Everyone feels stress related to work, family, decisions, your future, and more. Stress is both physical and mental. It is caused by major life events such as illness, the death of a loved one, a change in responsibilities or expectations at work, and job promotions, loss, or changes.

42 Worrying Workplace Stress Statistics - The American Institute of Stress Effects of Stress in the Workplace statistics 20. During 2018, 76% of US workers said that workplace stress affected their personal relationships. (Korn Ferry) This is another statistic that demonstrates just how much workplace stress affects other areas of our life. According to research by Korn Ferry, the majority of stressed employees reported that workplace stress has impacted upon their personal relationships in a negative manner. Mental Health in the Workplace Any mental illness is defined as having any mental, behavioral, or emotional disorder in the past year that met Diagnostic and Statistical Manual of Mental Disorders IV (DSM-IV) criteria (excluding developmental disorders and substance use disorders). Mental illness can vary in impact, ranging from no impairment to mild, moderate, and even severe impairment. Mindfulness is a psychological state of moment-to-moment awareness of your current state without feeling inward judgement about your situation. Mindfulness can be achieved through practices foster control and develop skills such as calmness and concentration. Self-management is a collaborative, interactive, and ongoing process that involves educators and people with health problems. The educator provides program participants with the information, problem-solving skills, and tools they need to successfully manage their health problems, avoid complications, make informed decisions, and engage in healthy behaviors.

Suffering burnout at work? SINGAPORE — Miss Wee Sihui is only 22, but the former retail assistant, who started working full-time early this year, is suffering burnout from work and its accompanying symptoms of feeling constant exhaustion, negativity, dread and pessimism. She used to work in a popular confectionery store and when there was a manpower crunch, she spent around 13 hours on her feet from 9.30am to around 10.30pm daily, juggling responsibilities meant for at least two employees. But it wasn’t just the physically punishing work routine that made her quit her job. The mental stress, fuelled by a lack of support at work, led to anxiety attacks. “I sometimes felt like I could not breathe.

11 Signs and Symptoms of Too Much Stress Stress is defined as a state of mental or emotional strain caused by adverse circumstances. At one point or another, most people deal with feelings of stress. In fact, one study found that 33% of adults reported experiencing high levels of perceived stress (). More money means more stress, says new study While a third of Americans say they are constantly stressed about their finances, new data finds that making more money can actually do harm as well as good. People who report making a higher income tend to face higher levels of stress at work and don’t necessarily experience higher job satisfaction, according to career platform LinkedIn. Based on a survey of 1,000 LinkedIn members currently employed in the U.S., researchers found that people who earn between $51,000 and $75,000 generally feel the least stressed. By contrast, of those who make an income of $200,000 or more, nearly 70 percent said they feel stressed. LinkedIn researchers also found that higher incomes did not translate to higher levels of job satisfaction: Roughly the same share of people who earn more than $250,000 a year say they are satisfied with their jobs as those who earn between $75,000 and $100,000.

Daily Life - The American Institute of Stress 2014 Stress Statistics General Stress Response Hans Selye defined stress as the body’s nonspecific response to any demand, whether it is caused by or results in pleasant or unpleasant stimuli. It is essential to differentiate between the unpleasant or harmful variety of stress termed distress, which often connotes disease, and eustress, which often connotes euphoria. During both eustress and distress, the body undergoes virtually the same non-specific responses to the various positive or negative stimuli acting upon it.

The high price of workplace stress Sick and tired of your job? You’re not alone. Nearly half (44 percent) of working adults say that their current job affects their overall health, but only 28 percent of those believe that effect is a good one. People with disabilities, in dangerous or low-paying jobs, and those in retail are most likely to say their job has a negative impact on their stress levels (43 percent), eating habits (28 percent), sleeping patterns (27 percent) and weight (22 percent), according to a new survey from the Harvard T.H. Sleep-deprived Singaporean workers among most stressed globally: Survey SINGAPORE — Singaporeans are not only sleep deprived, but they are also among the most stressed at work globally, according to a survey by health service company Cigna released on Tuesday (Mar 26). Nearly 92 per cent of Singaporeans surveyed were stressed from work, which was higher than the global average of 84 per cent. Of this group, 13 per cent said that the stress they faced was unmanageable. Singaporeans’ physical wellness index also dipped by 4.4 percentage points from last year, which the survey attributed to an increase in sleepless nights. Of the 23 markets surveyed, Singapore had the fifth lowest wellness index, which was measured across five key indices — family, financial, physical, social and work.