Focus on what you eat not whether your food is local 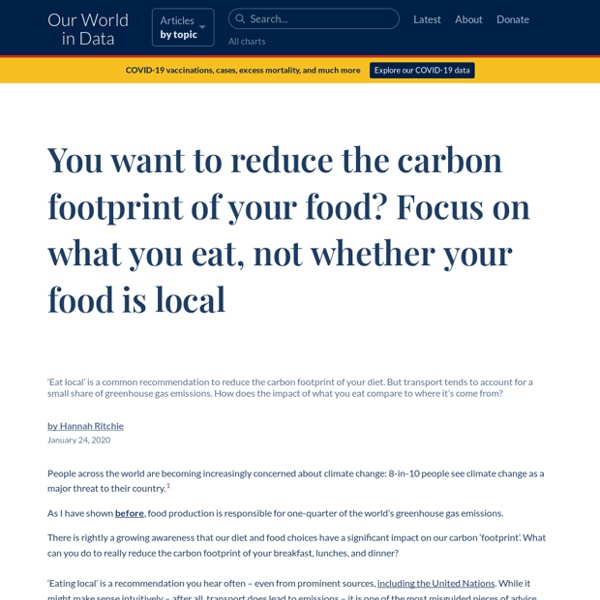 A Surge of New Plastic Is About to Hit the Planet As public concern about plastic pollution rises, consumers are reaching for canvas bags, metal straws, and reusable water bottles. But while individuals fret over images of oceanic garbage gyres, the fossil fuel and petrochemical industries are pouring billions of dollars into new plants intended to make millions more tons of plastic than they now pump out. Companies like ExxonMobil, Shell, and Saudi Aramco are ramping up output of plastic — which is made from oil and gas, and their byproducts — to hedge against the possibility that a serious global response to climate change might reduce demand for their fuels, analysts say. Petrochemicals, the category that includes plastic, now account for 14 percent of oil use, and are expected to drive half of oil demand growth between now and 2050, the International Energy Agency (IEA) says. The World Economic Forum predicts plastic production will double in the next 20 years. “They’re looking for a way to monetize it,“ Feit said.

Digital Carbon Footprint — What can we do ? - Guillaume Jacquart - Medium Disclaimer: I am by no means an expert in the field of energy production, green IT or related subject. The following information is just the result of personal research. Everybody tackles the subject of environmental issues their own way. Some think there is no issue, some believe it is an issue that humans have no impact on, and most of the others agree that the human race has effect on the earth ecosystem that has negative impact on life (whether plant, animal or human based). Although I’ve always been on the latter side of the spectrum, the problem was always kind of distant to my life for 3 main reasons that I think are shared by many: I believed the biggest problems would have technical solutions that experts would come up with and save the dayI thought these issues should be handled by the governments or large and influential associationsI also had the belief that I could not have real impact at my scale

Life after Veganuary: the ethical guide to eating meat, eggs and dairy Veganuary is over, leaving only the remains of a seitan burger and some cashew cheese in the back of the fridge. Perhaps you feel lighter and healthier; you will certainly feel more virtuous. But do you also feel like a steak? It is OK – you can admit it. The campaign group behind this annual event estimates that only half of the participants plan to remain meat-free beyond the end of the month. Clothing and textile manufacturing's environmental impact and how to shop more ethically - Science News - ABC News The shirt you're wearing right now: what's it made from? In its rawest form, was it once growing in a field, on a sheep's back or sloshing at the bottom of an oil well? We wear clothes literally every day, but few of us spend much time reflecting on what goes into manufacturing various textiles and their environmental impacts. This is interesting considering how much we think about the food we eat or the skin care products we use.

snopes This article by Mark Maslin is republished here with permission from The Conversation. This content is shared here because the topic may interest Snopes readers; it does not, however, represent the work of Snopes fact-checkers or editors. The fossil fuel industry, political lobbyists, media moguls and individuals have spent the past 30 years sowing doubt about the reality of climate change – where none exists. The latest estimate is that the world’s five largest publicly-owned oil and gas companies spend about US$200 million a year on lobbying to control, delay or block binding climate policy. Their hold on the public seems to be waning.

I was wrong about veganism. Let them eat meat (but farm it right) This will not be an easy column to write. I am about to put down 1,200 words in support of a book that starts by attacking me and often returns to this sport. But it has persuaded me that I was wrong. More to the point, it has opened my eyes to some fascinating complexities in what seemed to be a black and white case. In the Guardian in 2002 I discussed the sharp rise in the number of the world's livestock, and the connection between their consumption of grain and human malnutrition.

No vintage: Australian vineyards dump grape harvest as bushfire smoke takes its toll It was late October when Adrian Sparks caught sight of the first smoke rising from the hilly horizon. Within days the haze evolved into drift smoke, which grew thicker as the mountain behind the Mount Pleasant winery in the Hunter Valley caught fire. “It was full on,” Adrian says. “There was smoke all through November and December. A clear day would still be hazy. At its worst, some days our eyes would sting. ICAO Carbon Emissions Calculator CO2 Emissions per passenger take into consideration the load factor and are based only on passenger operations (i.e. fuel burn associated with belly freight is not considered). The steps for the estimation of CO2 emissions per passenger: Step 1: Estimation of the aircraft fuel burn Step 2: Calculation of the passengers' fuel burn based on a passenger/freight factor which is derived from RTK data Step 3: Calculation of seats occupied (assumption: all aircraft are entirely configured with economic seats). Seat occupied = Total seats * Load Factor

10 Protein-Packed Plants The continuing debate over how much protein the average person needs has done little to change our hunger for it. And who can blame us? Protein is one of the basic building blocks of life. When most people think of protein though, images of cheese, eggs and a leg of lamb pop into their head. Did you know though that every – yes, every – whole food contains protein.