How Should We Measure Student Learning? The Many Forms of Assessment 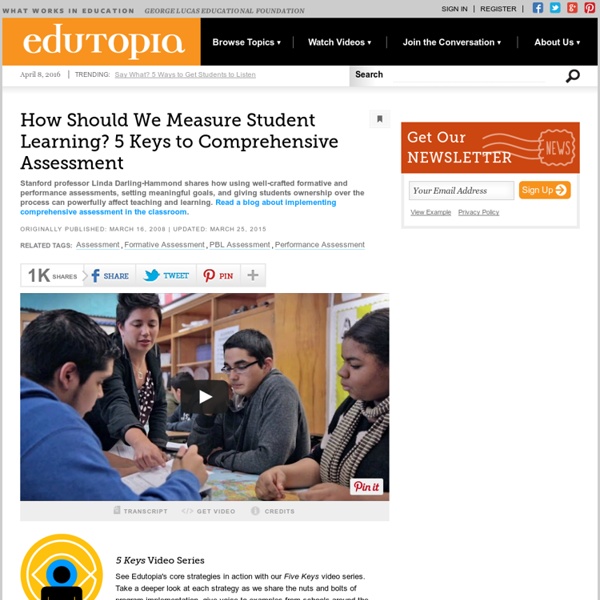 Linda: The United States is at a moment where it could really transform its assessment systems. Most of our testing is multiple choice tests, pick one answer out of five, which is something you will never do in applying knowledge in the real world. Our assessments need to evolve to reflect the skills and knowledge that we actually value and that we need schools to teach and our children to learn. Human beings are naturally learners. We are learning every moment of every day. In school, we have particular things to learn and we know that students learn more effectively when we're clear about what the goals are. Chinasa: I kind of like, I want like a goal in my head about what to do with information that I get. Erin: I look at the beginning of the year and I say, what are the big ideas that I want students to know in the whole year and what are the major skills I want them to be able to do? Linda: Assessment should occur early and often and throughout the process. Student: Connection. Related:  Assessments

Using Standards and Assessments:Why Standardized Tests Don't Measure Educational Quality W. James Popham A standardized test is any examination that's administered and scored in a predetermined, standard manner. There are two major kinds of standardized tests: aptitude tests and achievement tests. Standardized aptitude tests predict how well students are likely to perform in some subsequent educational setting. But standardized achievement-test scores are what citizens and school board members rely on when they evaluate a school's effectiveness. A Standardized Test's Assessment Mission The folks who create standardized achievement tests are terrifically talented. Such relative inferences about a student's status with respect to the mastery of knowledge and/or skills in a particular subject area can be quite informative to parents and educators. But there's an enormous amount of knowledge and/or skills that children at any grade level are likely to know. Accurate Differentiation As a Deity Measuring Temperature with a Tablespoon Testing-Teaching Mismatches Confounded Causation

10 ways to assess learning without tests… | What Ed Said A tweet by @wmchamberlain which caught my eye the other day, was the catalyst for this 10 ways post. Today’s #edchat discussion about the arts got me thinking further (as always). The arts can be integrated across other disciplines and can add another powerful layer to learning, be it history, maths, literature or bible! Every one of these tasks includes natural differentiation for different levels of ability. 1. Use the online cartoon creator, ToonDoo, to create a cartoon (or toonbook) which demonstrates your knowledge, explains your thinking about a topic or illustrates your understanding of a concept. 2. Work with your group to produce and present a play which demonstrates what you have learnt. 3. Make a video to demonstrate your learning. 4. Select a series of images that relate to your learning. 5. Create a headline that shows your understanding of the topic. 6. Write a blog post that shows your learning, or clarifies your thinking. 7. 8. 9. 10. Best of all. Like this:

Justification Testing - Testing, Assessment, And Excellence | Testing Our Schools | FRONTLINE The mad rush to embrace high-stakes testing says to me that we are now reaping what years of superficial indifference have sown. That is, for years educators have not held themselves accountable, so now business leaders and politicians are creating systems to hold schools accountable. As I will explain, the move to create standards is out of synch, and we're now testing with a vengeance, before the system has had time to get ready. ... Behind the Standards The push for standards began in force back in 1988, when President George Bush called the nation's governors together for the first-ever National Education Summit, held on the campus of the University of Virginia. Out of that largely theatrical meeting came a set of national education goals, some of which were actually written in the White House basement months later, some of which had been decided upon beforehand. Goals begot standards, and here the White House has taken a back seat. The next steps are not trivial or automatic either.

Assessing learning without tests - The Washington Post . Courtesy of The Johns Hopkins Center for Talented Youth In this era in which standardized tests are the be-all and end-all of accountability, it may seem impossible to imagine a teacher evaluating how well students are learning without giving them a test. By Joanne Yatvin Throughout my years as a teacher I was never much of a test giver. As I write this, I can almost see the looks of distain on the faces of some readers. In my view, the purpose of education is to enable all students to become fully functioning adults in all the roles they have chosen or are given to play: family member, community contributor, responsible citizen, humanitarian, etc. Our assessments of student learning were what any good teacher can see in students’ projects, writing, artwork, talk, and behavior. In the elementary grades, students often worked with partners or in small groups, assisting, persuading, compromising, leading, and following. Valerie Strauss covers education and runs The Answer Sheet blog.

Justification Why Students in Some Countries Do Better - Education Next In the K-12 education market, where countries the world over publicly finance and manage the great majority of their schools, the institutions and policies established by various levels of government must create incentives for school personnel to use their resources in ways that maximize performance. In the private sector, where firms are disciplined by market competition, it is usually assumed that resources are used effectively because firms would otherwise fail to profit. Inefficiency leads to higher costs and higher prices–practically an invitation to competitors to lure away customers. Within a country’s educational system, the relevant institutions and policies include the ways in which a society finances and manages its schools, how a society assesses student performance, and who is empowered to make basic educational decisions, such as which curricula to follow, which teachers to hire, and what textbooks to purchase. International Evidence Data Results Centralized exams.

What Schools Could Use Instead Of Standardized Tests : NPR Ed Close your eyes for a minute and daydream about a world without bubble tests. Education Week recently reported that some Republican Senate aides are doing more than dreaming — they're drafting a bill that would eliminate the federal mandate on standardized testing. Annual tests for every child in reading and math in grades 3 through 8, plus one in high school, have been a centerpiece of federal education law since 2002. No Child Left Behind, the current incarnation of the Elementary and Secondary Education Act, requires them. But this law has been overdue for reauthorization since before President Obama took office. Discussions about cutting back on these requirements comes at a time of growing concern about the number of tests kids take and the time they spend taking them. The Council of Chief State School Officers and the country's largest school districts have spoken out in favor of reducing the number of standardized tests students take. Here are four possible answers. 1) Sampling.

Screening for Reading Problems in Preschool and Kindergarten By Juli L. Pool, Ph.D., and Evelyn S. Johnson, Ed.D., Boise State University, Boise, ID Accurate identification of children who experience delays in attaining critical early literacy skills is needed to prevent reading problems. Studies have demonstrated that reading problems become increasingly more resistant to intervention and treatment after the 3rd grade. A positive trajectory in children’s reading is predicted by their acquisition of early core literacy skills. Designing effective early reading screening instruments is complicated by the interaction of the screening tasks with the time of year and age/grade at which they are administered. However, failing to identify young children exhibiting delays in early literacy acquisition or lacking core literacy skills is a risky venture. The ability of a screening measure to accurately classify or identify students as at risk or not at risk for poor reading outcomes is a key component of the measure. Note. Conclusion References Badian, N.

Test-Taking Cements Knowledge Better Than Studying, Researchers Say The research, published online Thursday in the journal Science, found that students who read a passage, then took a test asking them to recall what they had read, retained about 50 percent more of the information a week later than students who used two other methods. One of those methods — repeatedly studying the material — is familiar to legions of students who cram before exams. The other — having students draw detailed diagrams documenting what they are learning — is prized by many teachers because it forces students to make connections among facts. These other methods not only are popular, the researchers reported; they also seem to give students the illusion that they know material better than they do. In the experiments, the students were asked to predict how much they would remember a week after using one of the methods to learn the material. Several cognitive scientists and education experts said the results were striking. The final group took a “retrieval practice” test. Dr.

5 Ideas to Prepare Students for Success Without Standardized Testing | Lisa Nielsen Just type the word "testing" into the search box on Facebook and you'll find thousands of parents distraught over the standardized tests their children are being forced to take despite the fact that these parents know it is not in the best interests for their children who in many cases are becoming physically ill and emotionally traumatized by the experience of sitting for up to two weeks straight filling out bubble sheets and answering prompts. Schools are reluctant and even misleading when it comes to informing parents they can simply opt out often arguing that although they acknowledge that it might not be in the best interest of the child, without standardized tests, everything will fall apart. For many there is no alternative imaginable as in this comment from a graduate student studying to be a teacher. I can't STAND standardized tests. Isn't it odd 1. Students can be assessed in a standardized way by authentically demonstrating how standards have been met. 2. 3. 4.