The Yale Forum on Climate Change & The Media 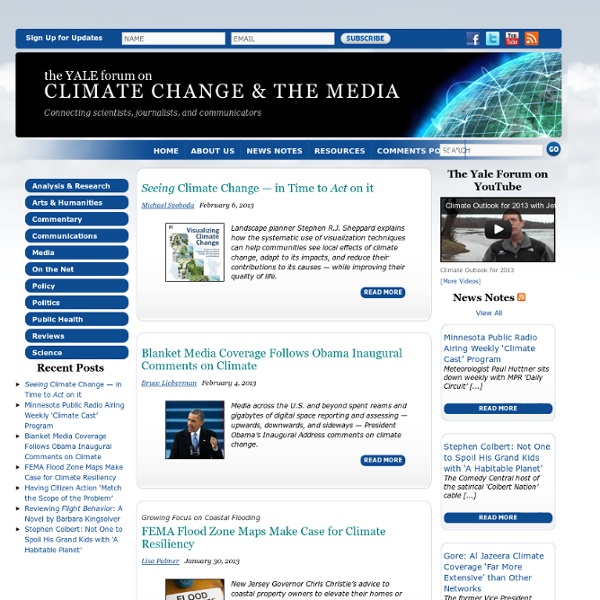 Rabett Run Carbon Visuals: Home Wood for Trees: Home Melbourne Climate Change Forum - Centre for Strategic Economic Studies - Research - Business and Law After many years of debate, climate policy has moved squarely into the implementation stage. The next six months are critical in determining what policies will be put in place and how effective they will be in containing global warming. The Melbourne Climate Policy Forum (MCPF) hosted six briefing seminars on key policy issues facing Australia, set in the context of the global decision making process. Each of the briefings provided an assessment of current knowledge and its implications for the policy issue in question, based in part on the ongoing research activities of the MCPF partners. Following the briefing, a distinguished external discussant reviewed the briefing provided, commented on the policy issue and introduced general discussion. The MCPF is a joint initiative of Victoria University, through the Centre for Strategic Economic Studies (CSES), and Carbon Market Economics Pty Ltd (CME). Recent News 1. Briefing 1:Avoiding Dangerous Climate Change (PDF, 2617KB). Back to top 2. 3. 4.

ClimateScienceWatch The Climate Group Jim Prall James W Prall Senior Systems Programmer The Edward S. Rogers Sr. Department of Electrical and Computer Engineering University of Toronto Office: GB254D Campus tel.: x65760 I am a system administrator and tech support contact for all research computing within ECE, along with our support group of Eugenia, Jay, Norman, Yong and Matthew. This page has been validated to HTML 4.01 specifications. Steps to add a direct TCP printer in Windows 7Steps to add a direct TCP printer in XP Back up data from your PC - see my page on BACKUPS Note that ECE backs up server accounts but not data stored locally on your desktop PC or laptop! Quick links X11 server for Windows Many of us use applications on Unix and Linux servers that use the X11 "GUI" (graphical user interface), such as Matlab, Altera, etc. We've recently reviewed several X11 servers for MS Windows. Firefox: New Choice for Web Browsing One major plus for Firefox is unlimited text zoom, which I find immensely beneficial. Product information

On the Frontlines of Climate Change | A global forum for indigenous peoples, small islands and vulnerable communities Hot Alaska, Cold Georgia: How The Shifted Polar Vortex Turned Winter Upside-Down By Ryan Koronowski "Hot Alaska, Cold Georgia: How The Shifted Polar Vortex Turned Winter Upside-Down" A photo released Wednesday Jan. 29, 2014, by the Alaska Department of Transportation & Public Facilities and made on Jan. 25, 2014, shows road crews beginning the job of clearing the closed Richardson Highway, near Valdez, Alaska. CREDIT: AP Photo/Alaska DOT&PF It’s easy to forget about other places in the world, or even in your own country, when you’re out shoveling snow, or people who are homeless suffer the worst of urban cold snaps, or harbor seals on the Hudson River ride ice floes, or your city shuts down due to a mismanaged winter storm. The polar vortex, normally tucked away much closer to the Arctic, has swept down several times this winter, bringing cold temperatures and snow to large segments of the U.S. east of the Rockies. But not only is this cold not unprecedented — it’s not even happening most places. Why the displaced cold? What happened was we had really unusual weather.

Climate Feedback Sid Perkins In the coming decades, the world’s coral reefs will suffer a variety of indignities, from global threats such as warming seas and ocean acidification to local and regional problems such as overfishing and nutrient-rich runoff. If carbon dioxide emissions remain high until the end of the century, reef coverage may drop by 50 percent or more even if local threats are addressed aggressively, a new study suggests. In a paper to be published in Global Change Biology, Kenneth Anthony, a marine ecologist at the University of Queensland in Brisbane, Australia and his colleagues modeled how reefs of branching corals of the genus Acropora would fare under various levels of climate change and fishing. Unsurprisingly, under the most extreme climate scenario — the IPCC’s A1FI scenario, in which atmospheric concentrations of carbon dioxide rise to exceed 900 parts per billion by 2100, compared to around 390 ppb today — reefs suffer the most.

Saul Griffith: Climate Change Recalculated Good evening. How are we for signal, very good, I am Stewart Brand from the Long Now Foundation. You maybe wonder what this Twitter thing is about. This data, it turns out is helpful helpful for funders of Long Now and of these talks. OSS - Global Warming You are here: Home › Projects & Resources › Environment › Global Warming Summarizing for policy makers current understanding of climate related science and potential impacts for risk assessment. The 'Leading Edge' reports are now open for comments (as of Oct. 31, 2010). You can register via the registration link in the upper right hand corner. All reports have had commenting enabled. Unless you have reasonable cause for anonymity, please use your real name as user ID. Consider yourself a guest on the site and please act accordingly. Use science to make your arguments and provide cites for claims. Context and relevance provides the foundation of reason-ability. Facts out of context are often irrelevant or less relevant. Inappropriate comments may be deleted at the moderators discretion. Can carbon dioxide be a good thing (context from 2007)? We begin 2011 with interesting new challenges in the climate debate pertaining to the willingness to address mitigation and adaptation at a policy level.