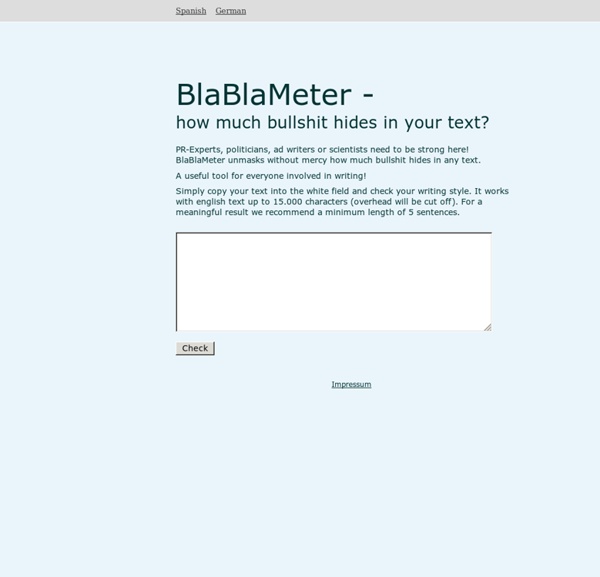 30+ Tools For The Amateur Writer NaNoWriMo (National Novel Writing Month) is almost upon us. On November 1st, brave souls everywhere will embark on a month long endeavor to write a story of at least 50,000 words. We've gathered 30+ tools to help those folks who want to try their hand at it. Collaborative Writing Coventi.com - A site offering several different packages, with the cheapest being free for the personal user. Google Docs - Part of the Google suite of products, which enables you to invite others to work with you on a document. 218 words to use instead of said from SPWbooks There is nothing wrong with using the word said in written dialogue. Be careful not to treat the word said as a word to be avoided. Well written dialogue should never rely on tags such as the ones below, but should convey its own attitude. When using words instead of said, be sure you utilize them properly. For example, you cannot laugh and talk, or sneeze and talk at the same time. "That is so funny, laughed Bob," should not be used.

a really fast dictionary About Why is this called Ninjawords? Ninjas are three things: A road with no obstacles by Duck Damaged people are dangerous because they know how to survive,And if you've never been damaged you don't know how it feels to be alive,See struggle is the sauce that gives success its flavour,when life kicked you down it was doing you a favour. Cos it's in your darkest hour, not in prosperitythat you will realise your true ability.Life dunks you in deep waters not to drown you but to cleanse you.And that's just the beginning of what it will put you through.But it's chiselling you down, you won't deflate.It's not wearing you thin, it's getting you to your fighting weight.Prosperity makes monsters, adversity makes men.I believe when you reach the top life will yank you back down again. You didn't break down, you just had a flat tyreso get back up and relight that fire.keep it burning and churning at the pit of your heartand keep on learning and yearning and never fall apart. Take a deep breath and concentrate your starebecause a road with no obstacles never took you anywhere.

Stupid Plot Tricks Section A: The Bad Guy If I Ever Become the Evil Overlord... 1. My Legions of Terror will have helmets with clear plexiglass visors, not face-concealing ones. 2. The Thirty-Six Dramatic Situations The Thirty-Six Dramatic Situations is a descriptive list which was created by Georges Polti to categorize every dramatic situation that might occur in a story or performance. To do this Polti analyzed classical Greek texts, plus classical and contemporaneous French works. He also analyzed a handful of non-French authors. In his introduction, Polti claims to be continuing the work of Carlo Gozzi, who also identified 36 situations. Publication history[edit] 100 Useful Web Tools for Writers All kinds of writers, including poets, biographers, journalists, biz tech writers, students, bloggers and technical writers, take a unique approach to their jobs, mixing creativity with sustainability. Whether you’re a freelance writer just scraping by or someone with a solid job and more regular hours, the Internet can provide you with unending support for your practical duties like billing, scheduling appointments, and of course getting paid; as well as for your more creative pursuits, like developing a plot, finding inspiration and playing around with words. Turn to this list for 100 useful Web tools that will help you with your career, your sanity and your creativity whenever your write. Getting Organized

The Richard Balzer Collection Phenakistoscope - France - c. 1833 "The Bogle" - Thomas McLain - Phenakistascope - England - 1833 Magic lantern slides for movie theater advertisements - America - c. 1925 The Praxinoscope - Émile Reynaud - France - c. 1880 Phenakistoscope - Netherlands - c. 1850 7 Ways to Use Brain Science to Hook Readers Writing and brain science Story is universal. There isn’t a society on earth that doesn’t tell stories. It’s no wonder, because stories captivate us in a way nothing else can. And yet, until recently, story was primarily seen as a delightful form of entertainment. Sure, we thought, stories make life much more enjoyable, but they don’t play a necessary role when it comes to survival.