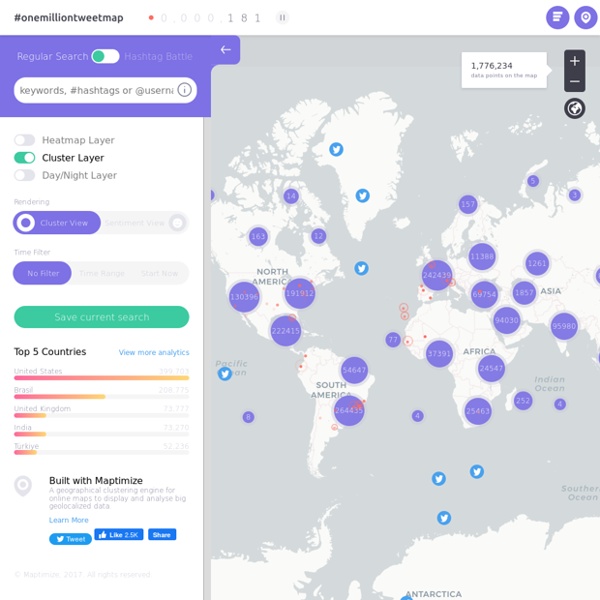 40 maps that explain the world By Max Fisher By Max Fisher August 12, 2013 Maps can be a remarkably powerful tool for understanding the world and how it works, but they show only what you ask them to. So when we saw a post sweeping the Web titled "40 maps they didn't teach you in school," one of which happens to be a WorldViews original, I thought we might be able to contribute our own collection. Twitter Search, Monitoring, & Analytics With iOS 9, Search lets you look for content from the web, your contacts, apps, nearby places, and more. Powered by Siri, Search offers suggestions and updates results as you type. There are two ways to use Search on your iOS device. Quick Search

Face search 40 more maps that explain the world Maps seemed to be everywhere in 2013, a trend I like to think we encouraged along with August's 40 maps that explain the world. Maps can be a remarkably powerful tool for understanding the world and how it works, but they show only what you ask them to. You might consider this, then, a collection of maps meant to inspire your inner map nerd. I've searched far and wide for maps that can reveal and surprise and inform in ways that the daily headlines might not, with a careful eye for sourcing and detail. I've included a link for more information on just about every one.

LjSEEK.com: LiveJournal Blogs Search Engine 百度一下，你就知道 How to Make a Map in Illustrator Every time I start thinking of a tutorial to write, I try to show techniques that I use in my job as a designer. For example, today I will be showing you how to make a nice little map. I was called to make a map for the university which was tedious but still fun. This can also be a neat little add-on to a party invitation or the like.First and most importantly turn on some music! Some Armin van Buuren thumping in the background helps the creative process. Secondly Make sure your computer is on.