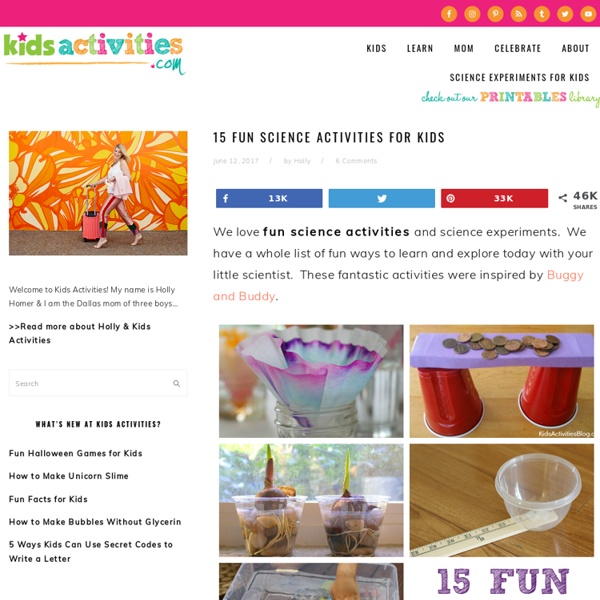 We love fun science activities and science experiments. We have a whole list of fun ways to learn and explore today with your little scientist. These fantastic activities were inspired by Buggy and Buddy. 15 Fun Science Experiments for Kids 1. Build a bridge with two plastic cups and construction paper and test your hypothesis of how many pennies it can hold before the bridge collapses. 2. 3. 4. 5. 6. 7. 8. 9. 10. 11. 12. 13. 14. 15. Did you know? Our book, The 101 Coolest Simple Science Experiments, features tons of awesome activities just like this one that will keep your kids engaged while they learn. Science Kits These science kits make it simple and easy to start experimenting right away! Tasty Science Kit – Learn why soda pop fizzes and why cakes rise!

Electricity for kids - and everyone else: A simple introduction! Advertisement by Chris Woodford. Last updated: April 14, 2016. If you've ever sat watching a thunderstorm, with mighty lightning bolts darting down from the sky, you'll have some idea of the power of electricity. A bolt of lightning is a sudden, massive surge of electricity between the sky and the ground beneath. The Sourcebook for Teaching Science The Sourcebook for Teaching Science – Strategies, Activities, and Instructional Resources, provides new and experienced teachers a wealth of teaching strategies, resources, lessons, activities, and ideas to enhance the teaching and learning of physics, chemistry, biology, and the earth and space sciences. Resources are based on learning theory, and are designed to stimulate student interest and involvement. As students engage in the activities of this book, they develop higher order reasoning skills, and a deeper understanding of scientific concepts and their relevance to their everyday life. The Sourcebook for Teaching Science is designed to complement any secondary school science curriculum.

Brain-zapping headwear designed to treat Parkinson's A team of graduate students at Johns Hopkins University has created a prototype device that delivers non-invasive brain stimulation to sufferers of Parkinson's disease. The brain-zapping headwear, dubbed STIMband, helps to reduce the severity of symptoms without requiring a visit to a hospital or doctor's office. While the device has not yet been clinically trialled on humans, its design took out second place at the VentureWell BMEidea national design contest earlier this month as well as first place in the People's Choice Award at Johns Hopkins' Biomedical Engineering Design Day 2015. Parkinson's affects a million people in the United States and seven million people worldwide, with symptoms including uncontrollable tremors and slow movement. It cannot be cured, it gets worse over time, and many of its treatments become less effective after prolonged use.

Esperimenti eniscuolachannel Loading... Working... ► Play all Esperimenti 10 Best Channels for STEM Education on YouTube Was Formula 1 in your syllabus growing up? Probably not, but times are changing. As of this year, Formula 1 cars have made the grade, and will be appearing in public school curriculum. NASCAR’s Acceleration Nation puts your child in the driver’s seat with an inspirational dose of STEM education. When you look at the speed and design of our racecars and their performance on the track, NASCAR represents a unique platform to teach math and science.

Intensity (physics) The word "intensity" as used here is not synonymous with "strength", "amplitude", "magnitude", or "level", as it sometimes is in colloquial speech. If a point source is radiating energy in all directions (producing a spherical wave), and no energy is absorbed or scattered by the medium, then the intensity decreases in proportion to distance from the object squared. This is an example of the inverse-square law. Science Lessons & Projects: Electricity & Magnetism Search form Search Subject: Physics/Electricity & Magnetism Aluminum-Air Battery Construct a simple battery that can power a light. Charge and Carry

percorsiScienze.html <table width=90% cellpadding=10><tr><td bgcolor=ff4444><span><h1>Warning:</h1><b>JavaScript is turned OFF. None of the links on this page will work until it is reactivated. <p><a href=" If you need help turning JavaScript On, click here.