The Past, Present, and Future of Data Storage 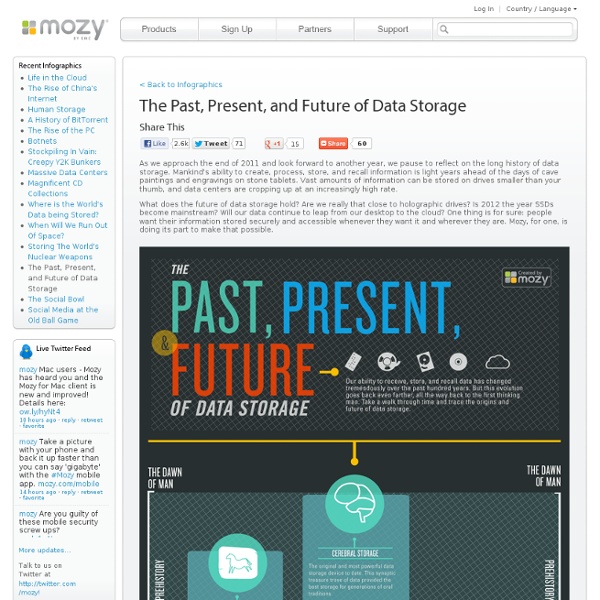 As we approach the end of 2011 and look forward to another year, we pause to reflect on the long history of data storage. Mankind's ability to create, process, store, and recall information is light years ahead of the days of cave paintings and engravings on stone tablets. Vast amounts of information can be stored on drives smaller than your thumb, and data centers are cropping up at an increasingly high rate. What does the future of data storage hold? Are we really that close to holographic drives? Is 2012 the year SSDs become mainstream? Embed this image on your site: Related:  Newish Computerish

Lexipedia - Where words have meaning Solid-state drive DDR SDRAM based SSD. Max 128 GB and 3072 MB/s. PCIe, DRAM and NAND-based SSD. As of 2010[update], most SSDs use NAND-based flash memory, which retains data without power. Hybrid drives or solid state hybrid drives (SSHD) combine the features of SSDs and HDDs in the same unit, containing a large hard disk drive and an SSD cache to improve performance of frequently accessed data.[9][10][11] Development and history[edit] Early SSDs using RAM and similar technology[edit] SSDs had origins in the 1950s with two similar technologies: magnetic core memory and card capacitor read-only store (CCROS).[12][13] These auxiliary memory units (as contemporaries called them) emerged during the era of vacuum-tube computers. Later, in the 1970s and 1980s, SSDs were implemented in semiconductor memory for early supercomputers of IBM, Amdahl and Cray;[15] however, the prohibitively high price of the built-to-order SSDs made them quite seldom used. Flash-based SSDs[edit] Enterprise flash drives[edit] Memory[edit]

Graph Databases, published by O'Reilly Media How To Become A Hacker Copyright © 2001 Eric S. Raymond As editor of the Jargon File and author of a few other well-known documents of similar nature, I often get email requests from enthusiastic network newbies asking (in effect) "how can I learn to be a wizardly hacker?". If you are reading a snapshot of this document offline, the current version lives at Note: there is a list of Frequently Asked Questions at the end of this document. Numerous translations of this document are available: ArabicBelorussianChinese, Danish, Dutch, Estonian, FrenchGerman, GreekItalianHebrew, Japanese, Lithuanian, Norwegian, PersianPortuguese (Brazilian), RomanianSpanish, Turkish, and Swedish. The five-dots-in-nine-squares diagram that decorates this document is called a glider. If you find this document valuable, please leave me a tip on Gittip. The hacker mind-set is not confined to this software-hacker culture. If you want to be a hacker, keep reading. 1. 2. 3. 5. 2. 3.

iPads can’t improve learning without good teaching Pt 2 – Writing Used with permission from Debbie Ridpath Ohi at Inkygirl.com ( ) Writing and technology has been a controversial subject for many traditionalists in education. “Spell check stops children from learning to spell”. “All students do today is copy and paste from Wikipedia and Google searched articles.” ” Children need to handwrite all their drafts”. “William Shakespeare didn’t have a laptop” ( OK, i just threw that in for fun!) The key words in that last sentence are of course publishing and writing. Which leads me once more to the star of “Mr G Online”, the iPad. I’ll preface this discussion by saying that many of my suggestions can certainly be carried out on laptops or indeed desktop computers. What is writing? A breakdown of genres, their processes and products I’m not going to use some perfectly expressed term written by literacy professors to impress anyone. Now originally, communication was verbal. iPADS AND WRITING The Composing/Editing stage

Home | OrientDB Document-Graph NoSQL DatabaseOrientDB Document-Graph NoSQL Database HackQuest :: Learn about Hacking, Cracking, JavaScript, PHP, Cryptology and Password security Lessons from an iPad Rollout Mobile Computing | Feature Lessons from an iPad Rollout Florida's "first iPad high school" has deployed 300 iPads to its high school teachers and students. Thanks to preparations on the infrastructure, training, and security fronts, the fall rollout has proved relatively snag-free. By Bridget McCrea09/21/11 In March and June, THE Journal reported on The Master's Academy and the challenges it was tackling on the way to becoming Florida's first iPad school. Preparations: Training, Bandwidth, Security "We distributed them about a week before school," said Salerno, "and the teachers and students are doing very well with the devices so far." Campus WiFi coverage was one area that Salerno was holding his breath over when the devices were fired up Aug. 15. The approach has worked well so far. Device security was another point of concern prior to rollout, especially because students would be taking their iPads home every night.

Comparison | OrientDB Manual 1.7.8 This is a comparison page between GraphDB projects. To know more about the comparison of DocumentDBs look at this comparison. We want to keep it always updated with the new products and more features in the matrix. If any information about any product is not updated or wrong, please change it if you've the permissions or send an email to any contributors with the link of the source of the right information. The products below all support the TinkerPop Blueprints API at different level of compliance. The table below reports the time to complete the Blueprints Test Suite. So this table is just to give an idea about the performance of each implementation in every single module it supports. Lower means faster. All the tests are executed against the same HW/SW configuration: MacBook Pro (Retina) 2013 - 16 GB Ram - MacOSX 12.3.0 - SDD 7200rpm. To run the Blueprints Test Suite you need java6+, Apache Maven and Git. > git clone mvn clean install

7 Most Notorious Computer Hacker Groups of All Time With the recent attack on PlayStation Network and a bunch of high-profile websites, computer hackers are back in the limelight again. Hackers and hacker groups were quite famous in the 80’s and 90’s but their popularity started fading since the Y2K days. Today, we are once again witnessing hackers threatening to take on giant corporations sending chills down everyone's spine. We have already featured here some of the most infamous black hat hackers of all time. This time, we will take a quick look at some of the most notorious computer hacker groups that ever existed: Masters of Deception This New York-based group was responsible for notorious acts such as downloading confidential credit card histories of stars like Julia Roberts, breaking into AT&T’s computer system and stealing credit card numbers. Legion of Doom MOD’s biggest enemy Legion of Doom was a famous hacker group founded by a hacker called Lex Luthor (real name: Vincent Louis Gelormine). Chaos Computer Club Milw0rm Anonymous