Why Being an Authoritative Parent Is the Best Approach 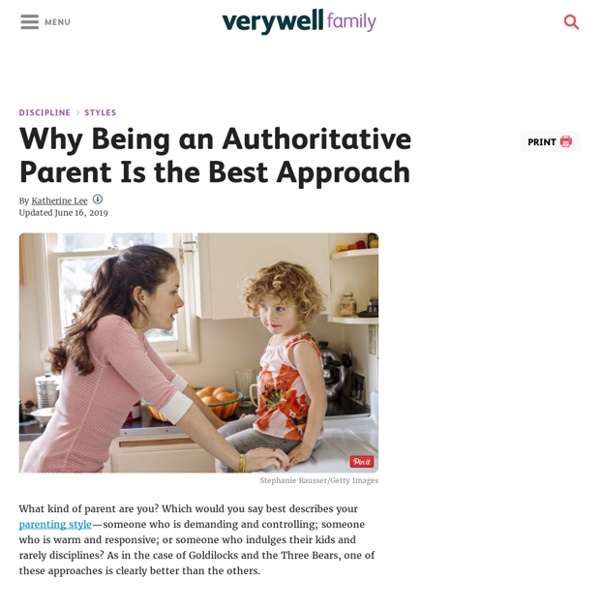 What kind of parent are you? Which would you say best describes your parenting style—someone who is demanding and controlling; someone who is warm and responsive; or someone who indulges their kids and rarely disciplines? As in the case of Goldilocks and the Three Bears, one of these approaches is clearly better than the others. The Four Types of Parenting Styles In the 1960s, psychologist Diana Baumrind wrote a groundbreaking paper based upon her research in which she detailed three types of parenting styles she observed: authoritarian, permissive, and authoritative parenting. Authoritarian Parenting Parents who fall under this classification of parenting style tend to demand absolute obedience from their children, no ifs, ands, or buts. Permissive Parenting Parents who practice permissive parenting don't discipline or impose rules; they don't want to have any conflict with their children believe kids should regulate themselves. Authoritative Parenting Uninvolved Parenting Related:  Parenting Styles • An introduction to psychology

Why Parenting Styles Matter When Raising Children Developmental psychologists have long been interested in how parents affect child development. However, finding actual cause-and-effect links between specific actions of parents and later behavior of children is very difficult. Some children raised in dramatically different environments can later grow up to have remarkably similar personalities. Conversely, children who share a home and are raised in the same environment can grow up to have very different personalities. Despite these challenges, researchers have posited that there are links between parenting styles and the effects these styles have on children. The Four Parenting Styles In the 1960s, psychologist Diana Baumrind conducted a study on more than 100 preschool-age children. These dimensions include disciplinary strategies, warmth and nurturing, communication styles, and expectations of maturity and control. Authoritarian Parenting While these parents have high demands, they are not very responsive to their children.

Outcomes associated with Authoritative Parenting Immigration: Acculturation and parenting Subject Over 200 million individuals worldwide are international migrants. Immigration involves a displacement with significant effects on family life, not least because of the cultural shifts inherent in resettlement. An emergent body of research is focused on the implications of immigration and acculturation for parenting. Introduction and Research Context Parenting occupies a central node in the nexus between culture and adaptive human development. Parents of each generation have the important and continuing task to enculturate the next generation: that is, to prepare children to function competently in the physical, economic, and psychosocial situations that are characteristic of their culture.1 Optimal child adaptation is achieved through socialization processes that involve inculcating culture. Key Research Questions To what extent do immigrant parents’ caregiving cognitions and practices change when they migrate from one culture to another? Recent Research Results Research Gaps

Correlating Parenting Styles with Child Behavior and Caries Smaller families in Singapore, leading to unhealthy parenting styles SINGAPORE: It really didn’t seem that long ago when the Stop at Two campaign was in full swing, warning parents in Singapore that “the more you have, the less they (each) get”. Yet, the challenge today isn’t to discourage families from having many children, but to coax or even cajole young Singaporeans to get married earlier and have them. Compared to a few decades before, family sizes are shrinking as new parents tend to have less children. Couples satisfy themselves with one or two kids being the norm, and three the exception. These days, the sex of the child is also of lesser importance. Family dynamics are also shifting, as families get smaller. Where older brothers and sisters would look after their young siblings in the past, and act as surrogate parents in households where both the father and mother have to work, children these days are growing up on their own, requiring active intervention from their parents. The child laughs and dodges attempts to be fed.

5 Ways Millennials Are Changing Parenting Forever Millennial parents, the cohort born between 1980 and 2000 of which there are an estimated 22 million of in the U.S., are astutely tailoring their parenting style to the needs of their family while challenging traditional societal norms. Shaped by an era dominated by post 9/11 security concerns, international conflicts, and a massive global recession, millennials have channelled a climate of uncertainty into a commitment to providing their kids with the best possible childhood. Here are five ways millennial parents are changing parenthood forever. In just the past five years, the international successes of Amy Chua’s Tiger Mother and Paula Druckerman’s Bringing Up Bébé starkly highlight differences in parenting approaches. While Druckerman is quick to assert that America has a ‘parenting problem’ in comparison to its French counterparts, Chua ultimately concludes that the goal of raising ‘happy, strong, and self-reliant’ children is achievable through many parenting methods.

Uninvolved Parenting Is the Authoritative Parenting Style Always the Best for Children? - hybrid parenting Today, the authoritative parenting style is perceived as the golden standard for appropriate parent-chid interactions. However, in many cultures, parents may have an authoritarian approach because they want to raise their children within the culture of respect. They may prioritize different socialization goals, such as respect over emotional closeness with their children. This was true in my family-of-origin; however, today, I am using the authoritative approach with my children. Culture influences parenting in various ways. However, I believe that they authoritative style of parenting is still beneficial for all children, regardless of culture. Background on Parenting Styles The parenting styles emerged in the early 1960s by psychologist Diane Baumrind. The authoritarian style is characteristic of parents who are high in control/ demandingness and low in warmth/responsiveness towards their child. When Culture Intersects with Parenting Styles By Amita Roy Shah, Ed.D.

Authoritarian parenting: What happens to the kids? Photo by CEphoto, Uwe Aranas © 2010-2017 Gwen Dewar, Ph.D., all rights reserved The authoritarian parenting style is about being strict and stern. It insists on unquestioning obedience, and enforces good behavior through threats, shaming, and other punishments. As defined by psychologists, it's also a style associated with less parental warmth and responsiveness (Baumrind 1991). That doesn't bode well for a child's health outcomes, especially if she's growing up in an otherwise stressful environment. But what about other things -- like behavior problems? If authoritarian parents are demanding, doesn't that at least suggest they'd produce kids who are better-behaved and more successful in the classroom? Surprisingly, the evidence indicates otherwise. Authoritarianism and the alternatives Researchers recognize at least three alternatives to authoritarian parenting: In addition, authoritative parents encourage their kids to ask questions, and they explain the rationale behind the rules. China