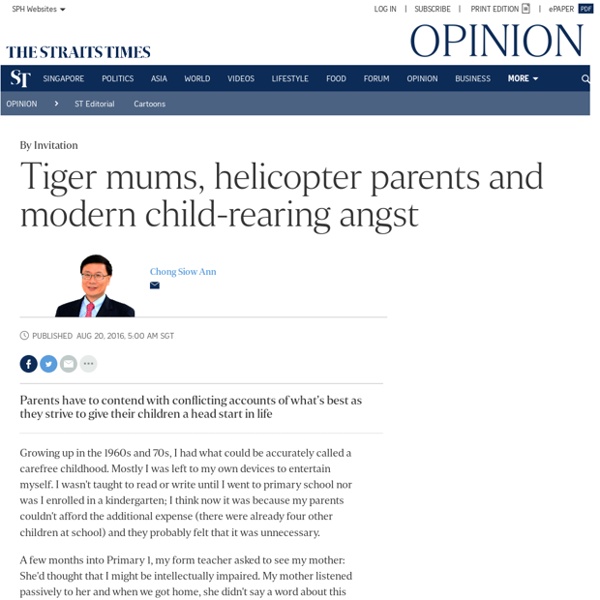 Growing up in the 1960s and 70s, I had what could be accurately called a carefree childhood. Mostly I was left to my own devices to entertain myself. I wasn't taught to read or write until I went to primary school nor was I enrolled in a kindergarten; I think now it was because my parents couldn't afford the additional expense (there were already four other children at school) and they probably felt that it was unnecessary. A few months into Primary 1, my form teacher asked to see my mother: She'd thought that I might be intellectually impaired. My mother listened passively to her and when we got home, she didn't say a word about this to me then and never after. My mother, who had a few years of formal education and could read and write only in Chinese, proceeded to coach me on that single subject and kept an eye out that I would complete whatever homework I was given - even though she couldn't understand most of the other subjects. There have been many calls for changes.

Millennials Turn to 'Kangaroo Parenting' I remember the first time I read “Bringing Up Bebe,” the seminal book on French parenting. I wasn’t even trying to be a parent yet, but after reading the glowing reviews, I saw what the fuss was about. I was particularly intrigued by a style of parenting that seemed to put parents and their needs before those of their children. All over Asia — where I grew up — making large sacrifices for your children seemed to be the only way to parent. Since I became a mom in 2016, I’ve only become more interested in parenting styles from around the world. I’ve read about the positive way Germans and Scandinavians raise their kids, about “attachment” and “helicopter” parenting.

Tailor parenting style to your child, Latest Singapore News "At the time, I chafed at such rigid structures... Yet, looking back, I realise how this sort of parenting helped me become the person I am today. The supervision, discipline and structure helped give me a form of security in my life." Smaller families in Singapore, leading to unhealthy parenting styles SINGAPORE: It really didn’t seem that long ago when the Stop at Two campaign was in full swing, warning parents in Singapore that “the more you have, the less they (each) get”. Yet, the challenge today isn’t to discourage families from having many children, but to coax or even cajole young Singaporeans to get married earlier and have them. Compared to a few decades before, family sizes are shrinking as new parents tend to have less children.

Supportive parents are associated with safer teenage driving Am Fam Physician. 2009 Dec 15;80(12):1486-1491. Background: Motor vehicle crashes are the leading cause of death and acquired disability among adolescents. Because behavior and behavioral choices account for more than 70 percent of all adolescent deaths, it has become increasingly apparent that influencing the driving-related attitudes and behaviors of teenagers is as important as teaching driving safety.

Many Singaporeans’ parenting style not helping children succeed - TODAYonline I was disturbed to read the report “MP proposes piloting cluster of schools without exams, streaming” (Jan 22). In the current debate on how best to restructure the education system, more people seem inclined to wash the outside of a dirty cup and call it clean, but leaving the inside filthy as ever. An examination-free education system would serve only to mask the inadequacies of the current generation of pupils, rather than help them to succeed.

Permissive Parenting: Its Characteristics And Effect On Children Image: Shutterstock Daniel’s parents were highly affectionate to him. He was allowed to sleep late and wake up whenever he wanted. He was allowed to play loud music even if it disturbed the neighbors. He had his way almost all the time. You might wonder if there is any parenting involved at all.

How Tiger Moms and hovering parents can damage a child’s ability to cope with life’s challenges Even if you were horrified at the idea of hovering over your child as Amy Chua did in her polarising 2011 bestseller Battle Hymn of the Tiger Mother, I’m betting there was a part of you that looked at her perfect children with at least a tinge of envy. As portrayed in the book, Chua’s magic formula of no play dates, no TV and always being No. 1 in everything (except for gym and drama, of course) ended up producing two girls who were straight-A students and who also were wildly talented in music. Oh, and they both ended up going to Harvard University. Critics predicted that daughters Sophia and Lulu would end up being “mentally ill, friendless robots”, according to a recent “where are they now” profile in The Telegraph in the UK.

Singapore parenting must evolve, says DPM Tharman as he warns against helicopter parenting, Education News SINGAPORE - As Singapore broadens its education system, parenting also needs to evolve, Deputy Prime Minister Tharman Shanmugaratnam said on Friday (Feb 15). "Kids need a mix of high expectations set for them and encouragement to think independently, think originally and develop their own interests," he said at an education conference at Hwa Chong Institution. Citing studies in the United States on the trend of "helicopter parenting", Mr Tharman said that such behaviour - where parents hover unnecessarily over their children - has long-term psychological side effects on children. "There is greater sense of anxiety, a loss of a sense of individuality or independence, and greater stress," he said, adding that children whose parents who set high expectations but are supportive do far better in their studies than those with authoritarian parents. In a 30-minute address to about 600 educators, Mr Tharman gave a broad outline of where Singapore education stands today and what can be improved.

Why Being an Authoritative Parent Is the Best Approach What kind of parent are you? Which would you say best describes your parenting style—someone who is demanding and controlling; someone who is warm and responsive; or someone who indulges their kids and rarely disciplines? As in the case of Goldilocks and the Three Bears, one of these approaches is clearly better than the others.