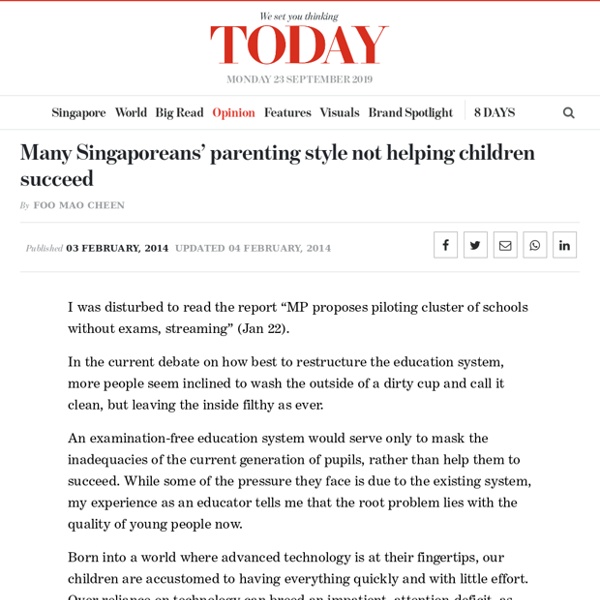 I was disturbed to read the report “MP proposes piloting cluster of schools without exams, streaming” (Jan 22). In the current debate on how best to restructure the education system, more people seem inclined to wash the outside of a dirty cup and call it clean, but leaving the inside filthy as ever. An examination-free education system would serve only to mask the inadequacies of the current generation of pupils, rather than help them to succeed. While some of the pressure they face is due to the existing system, my experience as an educator tells me that the root problem lies with the quality of young people now. Born into a world where advanced technology is at their fingertips, our children are accustomed to having everything quickly and with little effort. Over-reliance on technology can breed an impatient, attention-deficit, as well as mentally and physically slothful generation who cannot cope with anything that requires them to sit for hours to concentrate.

Millennials Turn to 'Kangaroo Parenting' I remember the first time I read “Bringing Up Bebe,” the seminal book on French parenting. I wasn’t even trying to be a parent yet, but after reading the glowing reviews, I saw what the fuss was about. I was particularly intrigued by a style of parenting that seemed to put parents and their needs before those of their children. Tailor parenting style to your child, Latest Singapore News "At the time, I chafed at such rigid structures... Yet, looking back, I realise how this sort of parenting helped me become the person I am today. The supervision, discipline and structure helped give me a form of security in my life." By conventional standards, my mother would be labelled a strict parent.

The relentlessness of modern parenting - TODAYonline NEW YORK — Parenthood in the United States has become much more demanding than it used to be. Over just a couple of generations, parents have greatly increased the amount of time, attention and money they put into raising children. Mothers who work outside the home spend just as much time tending their children as stay-at-home mothers did in the 1970s. The amount of money parents spend on children, which used to peak when they were in high school, is now highest when they are under 6 and over 18. Professor Renée Sentilles enrolled her son, Isaac, in lessons beginning when he was an infant.

Psychology Today Singapore From reading to infants to helping with schoolwork to enunciating values as the child grows, parents exert enormous influence over their children's development, success, and overall happiness. They are, however, not the only influences—especially after children enter school and begin interacting with the world at large. It's especially important that parents work to give children the best start possible, but it's also important for parents to recognize that kids come into the world with their own temperaments, personalities, and goals. Ultimately, while parents may want to push their child down a certain path, a parents' job is to provide an interface with the world that eventually prepares a child for complete independence and the ability to pursue whatever path they choose.

Tiger mums, helicopter parents and modern child-rearing angst, Opinion News Growing up in the 1960s and 70s, I had what could be accurately called a carefree childhood. Mostly I was left to my own devices to entertain myself. I wasn't taught to read or write until I went to primary school nor was I enrolled in a kindergarten; I think now it was because my parents couldn't afford the additional expense (there were already four other children at school) and they probably felt that it was unnecessary. A few months into Primary 1, my form teacher asked to see my mother: She'd thought that I might be intellectually impaired.

Thanks mum for not being a helicopter parent SINGAPORE: Growing up, my mother, who worked a 12-hour shift in retail, wasn’t a prominent figure at home. The only times my siblings and I saw her were before school and just before bed. Our dad who worked “regular” hours was around more. Still, she was fully involved in our childhood. Before leaving for work, she’ll prepare lunch for us to eat after school. What type of parent are you?, Opinion News What's the best way to raise your child? It's a question that has spawned numerous books, and seen authors race to coin the next quirky name for a new style of parenting. And it turns out there are many styles.

Parenting Style Quiz Instructions: This quiz is designed to help you better understand your parenting style. For each item, indicate how much you agree or disagree with the statement. This takes most people about 4 minutes to complete. Permissive Parenting: Its Characteristics And Effect On Children Image: Shutterstock Daniel’s parents were highly affectionate to him. He was allowed to sleep late and wake up whenever he wanted.

How Tiger Moms and hovering parents can damage a child’s ability to cope with life’s challenges Even if you were horrified at the idea of hovering over your child as Amy Chua did in her polarising 2011 bestseller Battle Hymn of the Tiger Mother, I’m betting there was a part of you that looked at her perfect children with at least a tinge of envy. As portrayed in the book, Chua’s magic formula of no play dates, no TV and always being No. 1 in everything (except for gym and drama, of course) ended up producing two girls who were straight-A students and who also were wildly talented in music. Oh, and they both ended up going to Harvard University. Critics predicted that daughters Sophia and Lulu would end up being “mentally ill, friendless robots”, according to a recent “where are they now” profile in The Telegraph in the UK. Instead, they ended up being “polite, modest and thoughtful” as well as successful, the article says, and they remember their childhood as tough – but happy.

Parenting styles observe in Singapore SINGAPORE: It really didn’t seem that long ago when the Stop at Two campaign was in full swing, warning parents in Singapore that “the more you have, the less they (each) get”. Yet, the challenge today isn’t to discourage families from having many children, but to coax or even cajole young Singaporeans to get married earlier and have them. Compared to a few decades before, family sizes are shrinking as new parents tend to have less children. Couples satisfy themselves with one or two kids being the norm, and three the exception.

Parenting Quiz - Active Parenting Differences in parenting styles are a problem for both parents and children. At the least, it invites kids to play one parent against the other in a smart attempt to get the answer that they want to hear. This is not the child’s fault. After all, a child is just using good common sense! Characteristics and Effects of Uninvolved Parenting Uninvolved parenting, sometimes referred to as neglectful parenting, is a style characterized by a lack of responsiveness to a child's needs. Uninvolved parents make few to no demands of their children and they are often indifferent, dismissive, or even completely neglectful. The Major Parenting Styles Are you a helicopter parent? - TODAYonline SINGAPORE — There has been quite a lot of talk about "helicopter parenting", or cosseting, in recent years - so much so that the Ministry of Education (MOE) even shared a post about it on Facebook earlier this month. The post linked to an article on MOE's online publication, Schoolbag.sg, which contained illustrations and examples of "helicoptering". These include situations such as bargaining with the child's teacher to give him one more mark so the child can go one grade up, doing the child's project for him instead of letting him do it himself, and "flying" to school with the child's homework when he forgets to bring it with him. But what is the exact definition of helicopter parenting? Dr Lim Boon Leng, a psychiatrist at Gleneagles Hospital, calls the phenomenon "a maladaptive type of parenting" in which the parent is "overprotective, hovers around the child, and gets involved in his affairs and activities excessively".