Urgent Evoke - A crash course in changing the world. 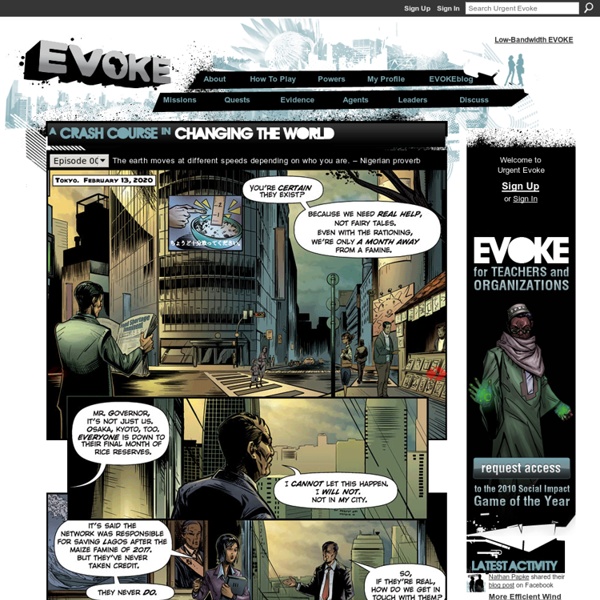 Game mechanics for thinking users « Web Worker's (Freak) Anthropology Game mechanics for thinking users Posted by Pietro Polsinelli on November 9, 2010 · 12 Comments Many software applications and web sites that are not commonly understood as games have some aspect that can be described in gaming terms. My point here is that a game design perspective can contribute in usability and functionality also in non gaming context. The post ends with examples of real world usage of game mechanics and some application suggestions.

Can Open Government Be Gamed? If information is power, the first step to gaining power is to get the right data. The Obama administration is a big proponent of opening up government data and making it digitally available. Today at the Personal Democracy Forum in New York City, the government’s new chief information officer Vivek Kundra announced USAspending.gov, a new site which launched today that tracks government spending with charts and lists ranking the largest government contractors (Lockheed, Boeing, Northrop Grumman, etc.) and assistance recipients (Department of Healthcare Services, New York State Dept. of Health, Texas Health & Human Services Commission, etc.). There is also the Data.gov project, which is attempting to digitize government data and make it available in its raw form for citizens and companies to sift through.

Fallen City: could a game help us find a solution to society's ills? The city is ruined. Bored and frustrated residents patrol the night streets, windows are smashed, buildings ransacked – there is no will or desire to fix anything or to understand its value. There is no sense of community any more… A year ago, journalist and author Jim Rossignol approached Channel 4's education department with the idea for a game – a game about broken cities. In 2008, the channel's then head of education, Janey Walker, had made the decision to switch much of the education spending from TV to online, putting aside a significant budget for the development of interactive, web-based projects with an educational remit. "At the time, the data and research showed that a term-time morning educational TV schedule didn't reach tweens and teens in any significant number," says Alice Taylor, who was education commissioner until earlier this year.

Richard A. Bartle: Players Who Suit MUDs Richard Bartle[1] MUSE Ltd, Colchester, Essex. United Kingdom.richard@mud.co.uk Four approaches to playing MUDs are identified and described. These approaches may arise from the inter-relationship of two dimensions of playing style: action versus interaction, and world-oriented versus player-oriented. An account of the dynamics of player populations is given in terms of these dimensions, with particular attention to how to promote balance or equilibrium. This analysis also offers an explanation for the labelling of MUDs as being either "social" or "gamelike". The Playpump: How a Simple Gamification Concept can Save the (third) World New to Gamification? Check out my post What is Gamification & my Gamification Framework: Octalysis Gamification visits the Third World

Wikis in the classroom, 2012 edition It’s been years now since I’ve written anything here, but a conversation today on the Eighteenth-Century Questions Facebook page made me realize I ought to update my reports from Wikiland. I’ve been using PBworks for wikis since shortly after they began the site in 2005. (NB: I have almost always participated in “private” wikis, not anything searchable, and I guarantee to students that, no, a future employer is not going to read their notes on Moll Flanders.) Some friends and I learned how to use the platform by playing a writing game called Lexicon and by developing an enormous recipe collection with over a hundred participants.

SCVNGR’s Secret Game Mechanics Playdeck Some companies keep a playbook of product tips, tricks and trade secrets. Zynga has an internal playbook, for instance, that is a collection of “concepts, techniques, know-how and best practices for developing successful and distinctive social games”. Zynga’s playbook has entered the realm of legend and was even the subject of a lawsuit. Game mechanics for causes – Catalysts for Change – Evolution of Philanthropy Nothing is more captivating than a well-thought out game. That’s why more and more initiatives are building games (or using game mechanics) to create positive social change. Here’s a new one that launched today – it’s called Catalysts for Change, and it gives players a game-like competition for sharing and responding to ideas about solving the world’s social problems. It’s a bit like Quora meets Twitter meets Trivial Pursuit. Here’s a video they put together that provides a brief overview:

Teaching Technologies: Tips and Tools Accessibility, Equal Access, and the ADA (part one) Just to get us started, check out these simulations that let you experience the web as a person with a visual disability would: blindness and colorblindness. If a simulation isn’t your thing, you can check out the Web Accessibility Initiative’s draft paper on How People with Disabilities Use the Web. Or you can read this wrap-up on how instructors should respond when a student has a speech impairment. You can also take a quick glance at an article reviewing the accessibility of different college and university websites: And here’s a table ranking schools on their ease of accessibility to blind students. The Planning of the War Ever since Germany had inflicted defeat upon France in the Franco-Prussian War of 1870-71, the major nations of Europe had busied themselves with plans for the next war, seen by many as inevitable given the conflicting ambitions of the major powers; which, in the case of France, included the repossession of Alsace and Lorraine, both lost to Germany as a consequence of the Franco-Prussian War. Much is made of the German Schlieffen Plan and, to a lesser extent, the French Plan XVII. But what of Austria-Hungary's Plan B and Russia's Plan 19? This article details the primary aims of each of these plans, and discusses the rationale behind them. France: Plan XVII The chief aim of Plan XVII, devised by Ferdinand Foch in the wake of the humiliation of the Franco-Prussian War, and taken up by French Commander-in-Chief Joseph Joffre in 1913, was the recapture of the territory of Alsace and Lorraine.

Features - The Designer's Notebook: Difficulty Modes and Dynamic Difficulty Adjustment [In Ernest Adams' latest Gamasutra column, he digs into difficulty levels in games, interestingly suggesting that player-set difficulty can, in many cases, be preferable to dynamic difficulty settings.] I just finished reading a book called Interactive Storytelling, by Andrew Glassner. While the first couple of hundred pages contain useful introductions to both storytelling and game design (for the novice, anyway), the book has some serious flaws and I can't really recommend it. But along the way, Glassner digresses into a variety of other subjects, and one of them is settable difficulty levels.

BigGames The last few years have seen the blossoming of real world computer games that allow players to learn about important global issues. Here are a bunch of them. (If you know of others, please let us know so we can post them.) Real Lives is a unique, interactive life sim that enables you to live one of billions of lives in any country in the world.

Using Wikis in Science Classes A Wiki, Hawaiian for quick or fast, offers science teachers the ability to manage their science classroom curriculum and activities, along with providing interactive information for their students. Wikis also provide teachers the ability to work collaboratively with their students on project based learning activities. Teachers can provide students with online group study guides, resources, and links to podcasts. Also, students are able to work on group assignments or submit individual assignments. 3/8/11: Gamification – Rajat Paharia Description of Class Students will learn about optimizing user behavior through the technique of gamification – the use of game mechanics in non-gaming contexts to influence and motivate user participation, engagement and loyalty. We’ll cover the basic game mechanics, why and how they work, and look at several examples of them being used in live applications across a variety of industries.