The Great Battle of Fire and Light — Wait But Why 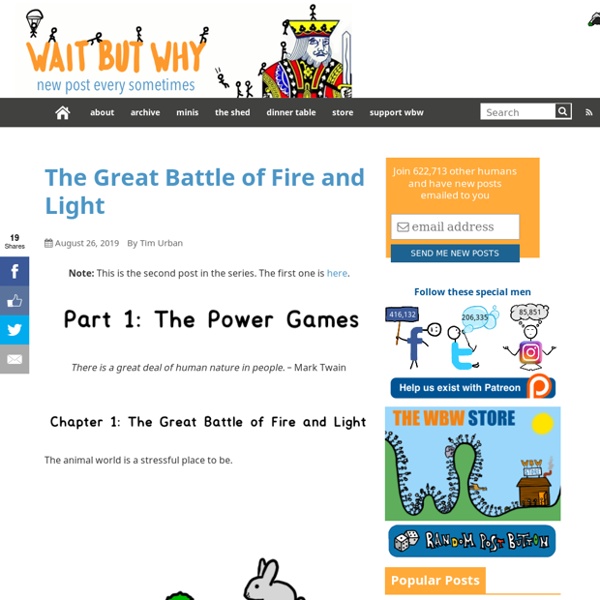 Note: This is the second post in the series. The first one is here. There is a great deal of human nature in people. – Mark Twain The animal world is a stressful place to be. The problem is that the animal world isn’t really an animal world—it’s a world of trillions of strands of genetic information, each one hell-bent on immortality. And in a universe that wants to turn order into chaos whenever possible, the immortality of anything—let alone a delicate and complex genetic code—is a constant uphill battle. Animals are just a hack these outlier genes came up with—temporary containers designed to carry the genes and help them stay immortal. But genes can’t talk to their animals, so instead they control them by having them run on specialized survival software. In simple animals, the software is an automated program that runs the animal on instinct. Genes need animals to conserve all the energy they can, so the software’s default settings will have “exhaustion” in a raised state.

The Lunar Planner: The Unfoldment of Number ©1995 Nick Anthony Fiorenza, All Rights Reserved As found in numerical teachings throughout the ages, from the schools of the Pythagorean lineage, to those of music theory, to the Kabbalah, the natural unfoldment of number is fundamental to all life. The principle of numerical progression underlies matter, energy, and consciousness in all of its forms. Although each number has its own unique character and quality, numbers are not separate from each other, but are intimately linked extensions in one unified, creative process. Here we will explore the sequential character of number in its simplicity—as the division and evolution of consciousness. It is commonly thought that each number arises from its previous number by adding one (1 + 1 = 2, 2 + 1 = 3, and so on.).

'The goal is to automate us': welcome to the age of surveillance capitalism We’re living through the most profound transformation in our information environment since Johannes Gutenberg’s invention of printing in circa 1439. And the problem with living through a revolution is that it’s impossible to take the long view of what’s happening. Hindsight is the only exact science in this business, and in that long run we’re all dead. Printing shaped and transformed societies over the next four centuries, but nobody in Mainz (Gutenberg’s home town) in, say, 1495 could have known that his technology would (among other things): fuel the Reformation and undermine the authority of the mighty Catholic church; enable the rise of what we now recognise as modern science; create unheard-of professions and industries; change the shape of our brains; and even recalibrate our conceptions of childhood. And yet printing did all this and more.

The Birthday Paradox Experiment Welcome to the party! Today you will participate in an about the birthday paradox. We will use you, the reader, as part of our data, to help explain what it is, why it is cool, and how it works. By Russell Goldenberg 2nd Grade Students Cover Their Teacher’s Dress In Drawings, And Her Story Takes Over The Internet Sometimes arming a bunch of 8-year-olds with paint and markers doesn’t have to result in a disaster. In fact, it can turn into a beautiful work of art! This is exactly what happened to Haley Curfman, a 2nd-grade teacher in Blackwell, Oklahoma. Broccoli Is Dying. Corn Is Toxic. Long Live Microbiomes! Editor’s Note (9/3/2019): This post has been substantially rewritten to change or eliminate claims and sourcing that did not meet Scientific American’s editorial standards. The revised post can be found here. As food writer Mark Bittman recently remarked, since food is defined as “a substance that provides nutrition and promotes growth” and poison is “a substance that promotes illness,” then “much of what is produced by industrial agriculture is, quite literally, not food but poison.”

Why Teaching Poetry Is So Important In an education landscape that dramatically deemphasizes creative expression in favor of expository writing and prioritizes the analysis of non-literary texts, high school literature teachers have to negotiate between their preferences and the way the wind is blowing. That sometimes means sacrifice, and poetry is often the first head to roll. Yet poetry enables teachers to teach their students how to write, read, and understand any text. Poetry can give students a healthy outlet for surging emotions. Reading original poetry aloud in class can foster trust and empathy in the classroom community, while also emphasizing speaking and listening skills that are often neglected in high school literature classes.

American Capitalism Is Brutal. You Can Trace That to the Plantation. A couple of years before he was convicted of securities fraud, Martin Shkreli was the chief executive of a pharmaceutical company that acquired the rights to Daraprim, a lifesaving antiparasitic drug. Previously the drug cost $13.50 a pill, but in Shkreli’s hands, the price quickly increased by a factor of 56, to $750 a pill. At a health care conference, Shkreli told the audience that he should have raised the price even higher. Haruki Murakami's advice on what to do when life looks dark What’s a person to do when bad news abounds? Taking to the streets or signing up for a campaign isn’t everyone’s cup of tea. If you’re not the activist type but still want to find a way to help humanity, Japanese novelist Haruki Murakami has a satisfying answer. Speaking at a New Yorker magazine event in New York on Oct. 6, Murakami explained that, in 2011, he was struggling with the question of what to do about others’ suffering, from the victims of the 9/11 terrorist attacks in the US to people hit by natural disasters in Japan. He concluded that the best he could do was continue to write stories that move people.

Mom Asks Pediatrician About The Idea Of Kids Going To School Again, Receives A Reality Check As the back-to-school date in the US is slowly approaching, more and more parents are seriously doubting whether to send their kids to school. With Covid-19 infections rising in 41 states and southern hotspots already undertaking crisis measures on Thursday, many feel like reopening schools physically would be hurried and plain dangerous. So one mom and book author from Atlanta named Aesha Saeed turned to her children’s pediatrician for advice. She found the doctor’s opinion “sobering because headlines and pundits are one thing, but a doctor I’ve trusted my children’s well-being to since each were born” is another. Aesha then passed on what she learned in this 6-tweet thread that will make you seriously weigh the risks of letting your kids sit at a school desk any time soon. This mom shared what her kids’ pediatrician had to say about sending kids back to school and it’s “sobering”

The Artificial Intelligence Revolution: Part 1 PDF: We made a fancy PDF of this post for printing and offline viewing. Buy it here. (Or see a preview.) Note: The reason this post took three weeks to finish is that as I dug into research on Artificial Intelligence, I could not believe what I was reading. It hit me pretty quickly that what’s happening in the world of AI is not just an important topic, but by far THE most important topic for our future. Time management for artists I think a lot of us, especially if we are doing this full time, have difficulties in managing our time properly. Its difficult to organize a day when there are 20 things you'd like to paint, emails to respond too, late night deadlines that screw up the next days plans, people knocking on your door thinking that because you are a self employed artist and don;t punch a "normal" clock, you don't have any proper responsibilities and can drop anything you are doing because someone needs a favour. We have commissions to handle, money to manage, shows to submit to. Some of us (me ) actually live in the studio so the line between what is work and rest gets blurred easily resulting in nothing really getting done.