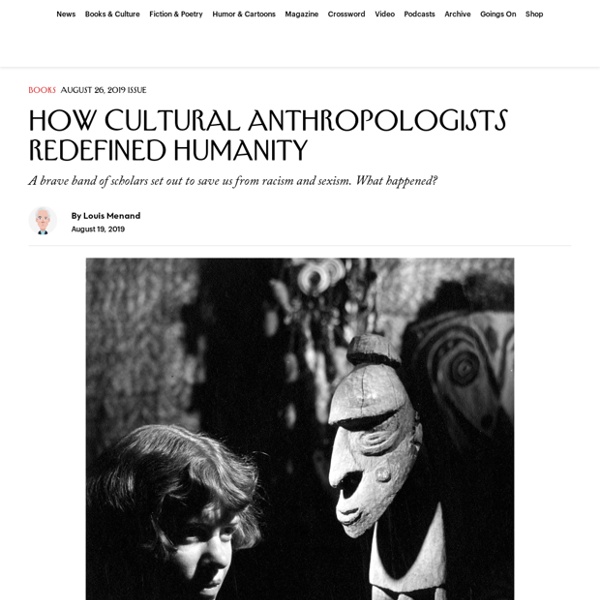 Not that long ago, Margaret Mead was one of the most widely known intellectuals in America. Her first book, “Coming of Age in Samoa,” published in 1928, when she was twenty-six, was a best-seller, and for the next fifty years she was a progressive voice in national debates about everything from sex and gender to nuclear policy, the environment, and the legalization of marijuana. (She was in favor—and this was in 1969.) She had a monthly column in Redbook that ran for sixteen years and was read by millions. She advised government agencies, testified before Congress, and lectured on all kinds of subjects to all kinds of audiences. She was Johnny Carson’s guest on the “Tonight Show.” Today, Margaret Mead lives on as an “icon”—meaning that people might recognize the name, and are not surprised to see her face on a postage stamp (as it once was), but they couldn’t tell you what she wrote or said. Boas was born and educated in Prussia. Boas was trained as a physicist.

There’s a Global Plan to Conserve Nature. Indigenous People Could Lead the Way. With a million species at risk of extinction, dozens of countries are pushing to protect at least 30 percent of the planet’s land and water by 2030. Their goal is to hammer out a global agreement at negotiations to be held in China later this year, designed to keep intact natural areas like old growth forests and wetlands that nurture biodiversity, store carbon and filter water. But many people who have been protecting nature successfully for generations won’t be deciding on the deal: Indigenous communities and others who have kept room for animals, plants and their habitats, not by fencing off nature, but by making a small living from it.

30 Screenshots Of People Who Caught Others Shamelessly Spreading Lies On The Internet And Stepped In To Shut Them Up Nobody was born BS-proof. We've all lied, said nonsense, regretted it, or maybe not. Sometimes the nonsense we shared did no harm to us or people around, and sometimes it really paid off. Like, white lies. These incredible little lies hold half honesty, half false chaos that spins the world around us. It's a whole different story when we encounter serious lies. David Attenborough Netflix documentary: Australian scientists break down in tears over climate crisis One of Australia’s leading coral reef scientists is seen breaking down in tears at the decline of the Great Barrier Reef during a new Sir David Attenborough documentary to be released globally on Friday evening. Prof Terry Hughes is recounting three coral bleaching monitoring missions in 2016, 2017 and 2020 when he says: “It’s a job I hoped I would never have to do because it’s actually very confronting …” before tears cut him short. The emotional scene comes during the new Netflix documentary, Breaking Boundaries: The Science of Our Planet, and shows the toll the demise of the planet’s natural places is having on some of the people who study them.

Canada’s Supreme Court says Native American Richard Desautel has right to hunt in Canada The ruling in the case of Richard Desautel, a U.S. citizen and member of the Lakes tribe of the Colville Confederated Tribes in Washington state, ended a legal battle that began in 2010 when he shot a cow elk in the Arrow Lakes region of British Columbia. Story continues below advertisement He alerted a conservation officer and was charged with hunting without a license and hunting big game while not a resident of British Columbia. He intended his action to be a test case. Desautel argued that he was exercising his right under Section 35 of Canada’s Constitution Act, which recognizes and affirms rights afforded to “aboriginal peoples of Canada.” 'Today I Learned': 30 Intriguing Things People Didn't Learn At School, But Found On The Net (New Pics) Life’s a never-ending lesson in the best way imaginable. If you’re even slightly curious about the world and have an open mind, you can quite literally learn something new every single day. And I don’t know about you, dear Pandas, but I’m on a roll and I don’t plan to stop my worldly education any time soon.

Indigenous People of Siberia Photographed for 'The World in Faces' Ulchi Woman. Ulchsky District, Khabarovsk Krai, Far East, Siberia. © Alexander Khimushin / The World In Faces For the past 9 years, photographer Alexander Khimushin has been traveling the world, visiting 84 different countries. Three years ago, inspired by the idea of documenting remote cultures that are slowly disappearing due to globalization, he began his The World in Faces project. Seeking out small, ethnic minority groups around the world, Khimushin shoots incredible portraits that both honor and immortalize their culture.

40 Accurate Insights To "What's A Movie Trope You Absolutely Hate?" Domestic violence against men = Comedy "You have to trust me" or "there's no time to explain". In 9 out of 10 cases, there's definitely time to explain, and the explanation would take less time thay trying to convince the other party to blindly trust you. Turning on the TV at the exact moment a relevant news report starts.

Pocket - Poor teeth click 2x I am bone of the bone of them that live in trailer homes. I grew up next to Tiffany ‘Pennsatucky’ Doggett, the hostile former drug addict from the prison TV drama Orange Is the New Black. I know her by her teeth. Pennsatucky – a scrappy slip of a woman menacing, beating and proselytising to fellow inmates – stole the show during the first season of the Netflix prison series. But amid an ensemble cast of similarly riveting, dangerous characters, it was her grey, jagged teeth that shocked viewers into repulsed fixation.