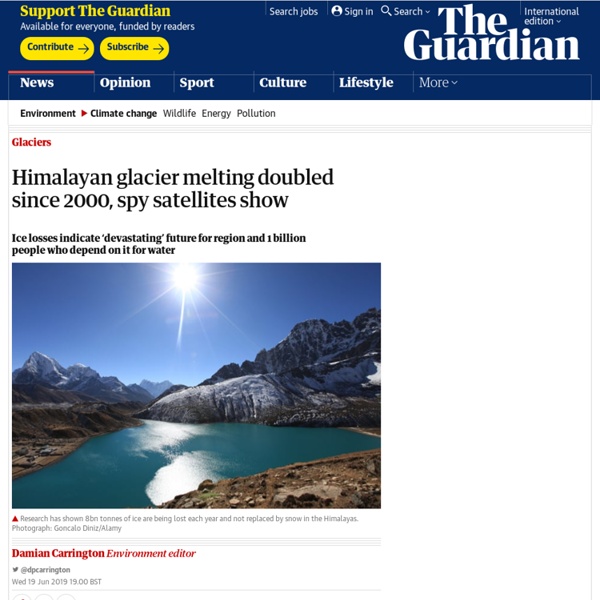 The melting of Himalayan glaciers has doubled since the turn of the century, with more than a quarter of all ice lost over the last four decades, scientists have revealed. The accelerating losses indicate a “devastating” future for the region, upon which a billion people depend for regular water. The scientists combined declassified US spy satellite images from the mid-1970s with modern satellite data to create the first detailed, four-decade record of ice along the 2,000km (1,200-mile) mountain chain. The analysis shows that 8bn tonnes of ice are being lost every year and not replaced by snow, with the lower level glaciers shrinking in height by 5 meters annually. The study shows that only global heating caused by human activities can explain the heavy melting. In previous work, local weather and the impact of air pollution had complicated the picture. The spy satellite photographs used in the research had lain unused in archives for some years.

Microscopic Images Of Seeds The diversity and intricacy of shapes and sizes of seeds is extraordinary. Even more amazing is that within even the tiniest of seeds lies the complete genetic information required to birth and structure such organisms as the complex passion flower, or a 360 foot tall sequoia. Seeds are also amazing travelers, either with the help of the wind or by hitching rides with neighboring wildlife. If stored in ideal conditions, seeds can also spring to life, after hundreds of years of lying dormant. Indian City in Water Crisis as All Four Reservoirs Run Dry (PHOTOS) Chennai, India's sixth largest city, is in the midst of a water crisis as its four main reservoirs are completely dry. Deficient monsoon rains, as well as excessive groundwater pumping and an inefficient and wasteful water supply system are to blame for the arrival of "Day Zero," the name given to the day that the city ran out of water and taps were turned off. The water shortage has forced the closure of schools, offices and businesses, and taps in homes have run dry. The crisis strikes as the country struggles with a heat wave that has taken dozens of lives. (MORE: Heat Wave Sears India) According to The Guardian, authorities in the city have been criticized for a lack of action as the water shortage worsened.

India Overestimated Economy GDP Growth From 2011-17: Study India’s statistics may have been painting a far rosier picture of economic growth than the more modest reality of the past decade. The nation has held the crown of the world’s fastest-growing major economy until recently, but a new study by former Chief Economic Adviser Arvind Subramanian says the expansion was overestimated between 2011 and 2017. Rather than growing at about 7% a year in that period, growth was about 4.5%, according to the research paper, published by the Center for International Development at Harvard University. The overestimation occurred after the previous Congress-led government changed the methodology in calculating gross domestic product in 2012. One of the key adjustments was a shift to financial accounts-based data compiled by the Ministry of Corporate Affairs, from volume-based data previously. This made GDP estimates more sensitive to price changes, in a period of lower oil prices, according to the research paper.

The Tiny Swiss Company That Thinks It Can Help Stop Climate Change Later, Wurzbacher told me he wants to offer a “one click” consumer service, perhaps in a year or two, which would expand what they’re doing in Iceland to individual customers and businesses. A Climeworks app could be installed on my smartphone, he explained. It could then be activated by my handset’s location services. “You fly over here to Europe,” he explained, “and the app tells you that you have just burned 1.7 tons of CO₂. Do you want to remove that? Well, Climeworks can remove it for you.

New research identifies Fukushima reactor material in environment Through the analysis of specific fallout particles in the environment, a joint UK-Japan team of scientists has uncovered new insights into the sequence of events that led to the Fukushima nuclear accident in March 2011. The multi-organisation research, led by Dr. Peter Martin and Professor Tom Scott from the University of Bristol's South West Nuclear Hub in collaboration with scientists from Diamond Light Source, the UK's national synchrotron facility, and the Japan Atomic Energy Agency (JAEA), has been published today in the journal Nature Communications. Like the Chernobyl accident of April 1986, the incident at the Fukushima Daiichi Nuclear Power Plant (FDNPP) has been classified by the International Atomic Energy Agency (IAEA) at Level 7 (the most-severe) of the International Nuclear Event Scale (INES) as a consequence of the large amount of radioactivity released into the environment. Dr. More information: Peter G.

Significance of Shanghai Co-operation Organization and Nepal The eight-member, four observers and 6 dialogue partners including Nepal with four guests attendances; the Shanghai Co-operation Organization (SCO) summit is being held on June 13th and 14th in Bishkek, Kyrgyzstan. The permanent secretariat of SCO is seated in Beijing and a security outpost in Tashkent. The guests to attend the SCO include the Association of South East Asian Nations (ASEAN), Commonwealth and the Independent States (CIS), the United Nations and Turkmenistan.

The Simplest Explanation Of Global Warming Ever Earth energy budget diagram, with incoming and outgoing radiation (values are shown in W/m^2). Satellite instruments (CERES) measure the reflected solar, and emitted infrared radiation fluxes. The energy balance determines Earth's climate. Extinct Russian Volcano Has Woken up and Could Unleash 'Pompeii-size' Eruption, Scientists Warn A volcano previously classified as "extinct" in Russia's far east has woken up, and experts are now warning it could produce an eruption similar to the one that wiped out Pompeii and Herculaneum almost 2,000 years ago. The Bolshaya Udina volcano is a stratovolcano located at the center of the Klyuchevskaya volcano group on Russia's Kamchatka Peninsula. It stands at around 10,000 feet in height and, until 2017 it was considered extinct, meaning it has not erupted in a long time and is unlikely to ever erupt again.

Jugaad A temporary jugaad improvised repair for a broken support Jugaad (alternatively Juggaar or Jugar) is a colloquial Hindi (Devanagari: जुगाड़), Bengali (যোগাড়), Marathi जुगाड, Punjabi and Urdu (جگاڑ) word, which has various meanings depending on the situation. In Tamil it is translated as உத்தரம், Roughly translated, jugaar is a "hack".[1] It could also refer to an innovative fix or a simple work-around, a solution that bends the rules, or a resource that can be used in such a way. It is also often used to signify creativity: to make existing things work, or to create new things with meager resources. More acidic oceans 'will affect all sea life' Image copyright JAGO-TEAM/GEOMAR All sea life will be affected because carbon dioxide emissions from modern society are making the oceans more acidic, a major new report will say. The eight-year study from more than 250 scientists finds that infant sea creatures will be especially harmed. This means the number of baby cod growing to adulthood could fall to a quarter or even a 12th of today's numbers, the researchers suggest. The assessment comes from the BIOACID project, which is led from Germany. A brochure summarising the main outcomes will be presented to climate negotiators at their annual meeting, which this year is taking place in Bonn in November.