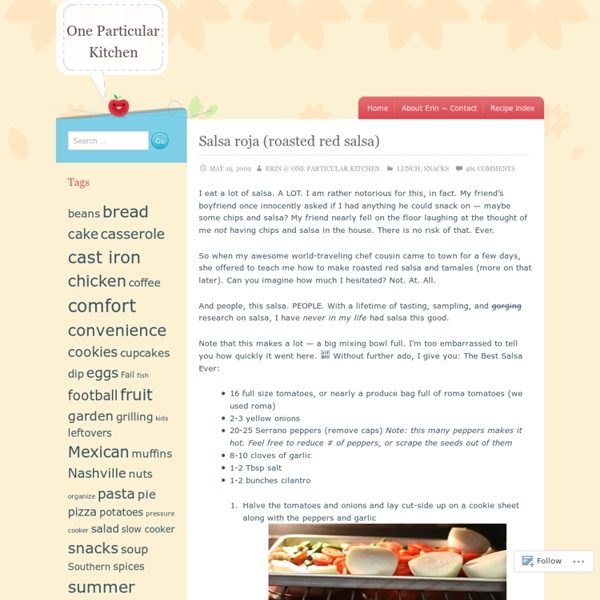 I eat a lot of salsa. A LOT. I am rather notorious for this, in fact. My friend’s boyfriend once innocently asked if I had anything he could snack on — maybe some chips and salsa? My friend nearly fell on the floor laughing at the thought of me not having chips and salsa in the house. There is no risk of that. So when my awesome world-traveling chef cousin came to town for a few days, she offered to teach me how to make roasted red salsa and tamales (more on that later). And people, this salsa. Note that this makes a lot — a big mixing bowl full. 16 full size tomatoes, or nearly a produce bag full of roma tomatoes (we used roma)2-3 yellow onions20-25 Serrano peppers (remove caps) Note: this many peppers makes it hot. Let it all cool a bit, then run through the food processor with salt and cilantro (we had to do this in two batches)Stir it all together and eat with abandon.

A Two Bite Breakfast: Bacon & Eggs in Toast Cups * Updated post from archive: Originally posted March 29, 2009 If you where to ask me what is my favorite meal of the day without a thought my response would be breakfast! I love breakfast! oven-roasted tomato confit I've moved! Check out my new site here and subscribe to receive updates. I should probably let you in on this fact before I begin: I don’t like ketchup. I know, I know. How can one not like ketchup? Probably comparable to how I feel about people who don’t like cheese. Avocado Fries Oh dear. I never should have done this. This may be one of my biggest mistakes all year. Can’t take it back now. So we’re totally enjoying our grilled avocados, but my husband innocently asks “What else can you do with avocados?” And so my daughter tweets this recipe, and I'm laying all the blame on them.

Magic Sauce Recipe I call this the magic sauce recipe. In part, because it makes everything it touches shimmer with deliciousness. It's magic like that. Technically, it's a riff on a chimichurri sauce - one that veered off the rails in a big way. gooseberry mooseberry: Shrimp and Noodle Salad It's been hot. We've had an almost unbearable heatwave last week. And once again cold dishes and salads are my friends. Truth is, I don't remember much of the last month and a half of summer. Save for a few stolen moments. For they do feel like stolen. Spinach Pesto Grilled Cheese Sandwich Earlier on in the week, when I made the spinach, or spanakopita pesto pasta I made sure to keep some of the pesto left over for something new. I had come across the idea of using a pesto in a grilled cheese sandwich and it was the perfect time to try one. I have been experimenting with grilled cheese sandwiches for a while now. It all started when I first tried adding some jam to one then I moved on to chutneys and now it was time to try a pesto grilled cheese sandwich. Since the spinach pesto had some Greek flavours going on I decided to use a Greek cheese, graviera, in the sandwich.

Pickled Vegetables & Chillies I love crunchy foods. I love salty foods. I love spicy foods. I love foods that come in jars. Oh hey there, Mr. Pickle – I think you’re just up my alley! Baked Cheesy Chicken Bake Today’s recipe is a cheesy baked pasta that I found over at Our Best Bites . Sara based the recipe on a Martha Stewart recipe. This yummy dish consists of a cheesy pasta blended with chicken, sun-dried tomatoes, and mushrooms. Now I know the sun-dried tomatoes aren’t something most of you probably keep on had, so you could just leave them out if you like. Deena Kakaya Vegetarian Recipes & Cooking Somewhere along the journey, the lines between work and play, rest and recreation changed. For most of the years that my husband and I have been together, we shared energy and squinted-eyed enthusiasm for filling our pockets of free time with making memories, having fun, exploring, travelling and being spontaneous in a sensible sort of way. Our summers were long and full of weekends away and eating outdoors and with friends in the weekday evenings. Each summer we would make our trip to our favourite spots in Cornwall. Pothcurno being one of them. Pothcurno houses an open air theatre on the edge of a cliff, overlooking seas with a blue swirl that could easily be confused for a Mediterranean destination.

Oven Roasted Potatoes When I heard this month’s Kitchen Bootcamp Challenge was potatoes, I was pumped. Originally, I had great plans for the sweet potatoes still in my basement from last fall, but after researching and chatting with the hubby, I decided to go with Yukon Gold potatoes instead. My husband isn’t a huge fan of sweet potatoes and I wanted to make something he would enjoy too, so that’s how I settled on this oven roasted potato recipe. Yukon Golds are our favorite potato to grow in the garden and they absolutely melt in your mouth when freshly dug from the garden. But oddly enough, I’ve never actually roasted them in the oven.

Unfettered F-U-N . . . Rainbow Jelly Shooter! Rainbow Jelly Shooter Its been a whirlwind at the test kitchen. The book is progressing (crossing fingers that it is going to press in early December!), we have been working on a little something (three little somethings, actually) for Saveur.com, and about a million more actions items cropping up here and there, many of which have not received appropriate attention and are currently housed in a bin marked "anxiety provoking". One of the highlights of our week was a lovely chat with Erin over at Tablespoon.com, who mentioned that they were hosting a Double Rainbow Week, which sounded like such fun! (And it IS - featured items include double rainbow . . . donuts!

Orange Marmalade Want to know a secret? Last summer I caught the canning bug. I thought it was something incredibly difficult and not for me. Was I ever wrong! Yes I admit it’s a little time consuming but it couldn’t be easier and you reap the benefits all year long. You already know we can our tomatoes, but we loves jellies, jams and marmalades too.