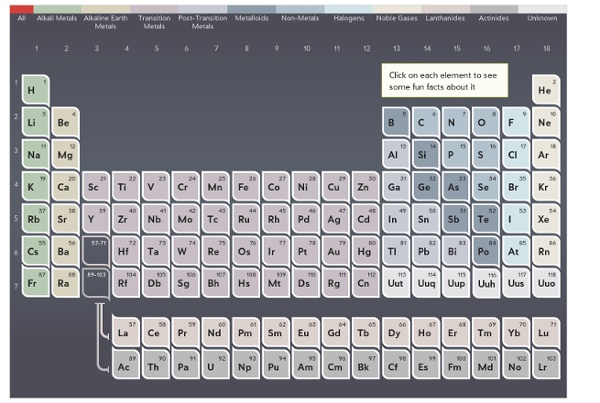 Hydrogen Fun Fact: Despite all the nuclear fusion that has occurred in stars since the big bang, hydrogen is still by far the most abundant element in the universe, and makes up four-fifths of all ordinary matter. For a while it was touted as the fuel of the future, but it remains difficult to produce, transport and store. At extreme temperatures and pressures, like those at the core of a gas-giant planet, hydrogen can become metallic. He Helium Fun Fact: It is not the lightest of all elements, but it is the smallest: it has a stronger electrostatic charge in its nucleus than hydrogen does, and thus it keeps its electrons in a tighter orbit. Li Lithium Fun Fact: One of only three elements to be created in the big bang, though in much smaller amounts than hydrogen or helium. Be Beryllium Fun Fact: This element is the first one that requires more neutrons than protons in its nucleus in order to be stable, and thus it created a bottleneck in the formation of new elements after the big bang. Boron

10 Everyday Inventions Made Better. Except #4, It Might Make You Gag. Here are 10 genius re-inventions that made these everyday items even better. Some of these didn’t seem like they could be improved but these inventors managed to do it! #1. This SnapRays Guide Light nightlight lasts for 25 years and keeps outlets free for other uses. Snap Power #2. How to Read 300% Faster in 20 Minutes (Photo: Dustin Diaz) How much more could you get done if you completed all of your required reading in 1/3 or 1/5 the time? Increasing reading speed is a process of controlling fine motor movement—period. This post is a condensed overview of principles I taught to undergraduates at Princeton University in 1998 at a seminar called the “PX Project”. The below was written several years ago, so it’s worded like Ivy-Leaguer pompous-ass prose, but the results are substantial.

General Issues in Scaling « PreviousHomeNext » S.S. Stevens came up with what I think is the simplest and most straightforward definition of scaling. He said: Scaling is the assignment of objects to numbers according to a rule. Judith Ann Braun's Fingers Are Magical With an art career spanning more than three decades, Judith Ann Braun has tested the limits of her artistic musculature. She began as a self-described “realistic figure painter,” and worked through the struggles common to anyone who endeavors upon an artistic pursuit, that of searching for one’s own voice in the chosen medium. Fast forward to the 21st century where the evolution of Braun’s work has brought us to the Fingerings series, a collection of charcoal dust landscapes and abstracts “painted” using not brushes but her fingertips. Braun has a specific interest in symmetry, as evidenced by the patterns she follows in a number of the Fingerings pieces as well as work in the Symmetrical Procedures collection. Her fingerprints are obvious up close in some of the paintings, though a step back and the grandeur of Braun’s imagination sprawls into a landscape of soft hills, overhanging trees, delicate florals, and a reflective waterway.

23 Epic Science Gifs to Blow Your Mind ~ Booze Up Buddy All these beautiful science gifs, and I can think of is to make bad semen and boner jokes. Some of these best epic science gifs that have proven success in many different science 3D-printed microscopic cages confine bacteria in tiny zoos for the study of infections A magnet falling through a copper pipe Einstein for Everyone Einstein for Everyone Nullarbor Press 2007revisions 2008, 2010, 2011, 2012, 2013 Copyright 2007, 2008, 2010, 2011, 2012, 2013 John D. Norton Published by Nullarbor Press, 500 Fifth Avenue, Pittsburgh, Pennsylvania 15260 with offices in Liberty Ave., Pittsburgh, Pennsylvania, 15222 Men Who Dress Like Men 1. Life isn’t fair, but it’s still good. 2. When in doubt, just take the next small step. 3. Life is too short not to enjoy it.

If the Moon Were Only 1 Pixel - A tediously accurate map of the solar system Mercury Venus Earth You Are Here Moon Mars university lectures physics Whether your goal is to earn a promotion, graduate at the top of your class, or just accelerate your life. Lectures can help get you there. Our archives of lectures cover a huge range of topics and have all been handpicked and carefully designed by experienced instructors throughout the world who are dedicated to helping you take the next step toward meeting your career goals. With OnlineCourses.com's engaging collection of lectures, your free time will turn into self-improvement time.