Wiki communities for everyone! 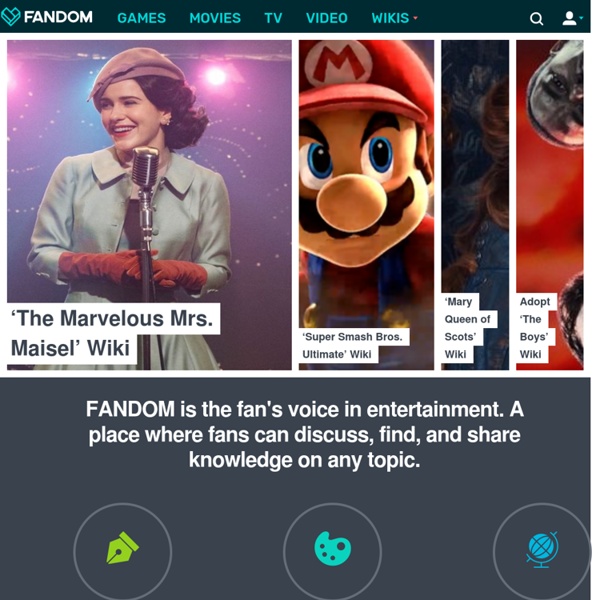 How to improve your website’s design in 7 simple steps How often do you search a certain website and eventually give up because you just can’t find what you want? How many times have you had to put on glasses in order to read the text? And how frustrating is it when certain websites makes you scroll your screen from left to right to complete a sentence? Your website visitors are busy, impatient, and have ten other webpages open that are competing for their attention. They will leave your website if they can’t very quickly find what they are looking (in a matter of seconds) or if they have to work too hard to get it. Good website design is a crucial element to attracting and keeping users. Famous Things, People and Events Archive for 'Bizarre' Famous Obscure Facts More People Should Know About Introduction The world is full of facts â€“ some we think we know and even some facts that challenge the way we think we see the world are not actually true. Every day, research shows us that we were wrong about a certain situation. Here is a sample list of some interesting facts that most […] Full Story

Case-Study: Deconstructing Popular Websites (Opinion Column) - Smashing Magazine Advertisement In our past articles, we’ve experimented with better ways to engage users on web pages with CSS31. We love getting into the nuts and bolts of web design by showing off some nifty coding tricks. In this article we’ll take a step back to provide some reasoning for designers to embark on that next redesign. Dr. Horrible's Sing-Along Blog Plot[edit] Dr. Horrible's Sing-Along Blog consists of three acts of approximately 14 minutes each. Latest stories, photos and videos about Kylie Jenner - HELLO! US Kylie Jenner finally admits to using 'temporary lip fillers' After much speculation about whether or not Kylie Jenner had enhanced her often photographed plump… Kris and Kendall Jenner tear up in clip from upcoming Bruce Jenner special Kris Jenner is finally breaking her silence after her ex-husband Bruce Jenner revealed that… Kylie Jenner responds to lip plumping challenge craze The #KylieJennerLipChallenge has been taking over the internet and now the reality-TV star who… Anna, Beyoncé and Jay Z: Kanye West's fashion week debut dazzlesKanye West brought his A-game, and a constellation of A-list stars, to his New York Fashion Week… Lionel Richie's teenage daughter lands modeling contract Lionel Richie's daughter Sofia is making a name for herself in fashionGood looks certainly run… Time's most influential teens: Malala Yousafzai, Kendall Jenner and more Time Magazine has culled together a roster of the 25 Most Influential Teens, and everyone from…

Introduction For reasons passing understanding, the page you were looking for doesn't seem to exist. Perhaps you were looking for one of the events on our schedule? This is a newer version of our site, and while we tried to redirect all the old pages to the right place maybe we missed some. The old site is located at archive.aneventapart.com, try looking there — and feel free to let us know if you can't find what you're looking for. Workshop Only Boston Boston Marriott Copley Place Register Now!

50 Cool and Creative Products by Fred & Friends Yesterday I was listening to Supersci, and there was a part talking about how humans always move forward – forward to the better world. While it sounded somehow funny that day, it was probably true! I came across this incredibly innovative Fred and Friends shop (also check Amazon), and it proved the proposition from the song. People do always move forward! Fred takes our old dull things and takes them to the whole new level. They are like scientist, but with a sense of humor (what a strange combination).