The treasure trove of unique genomes hiding in plain sight 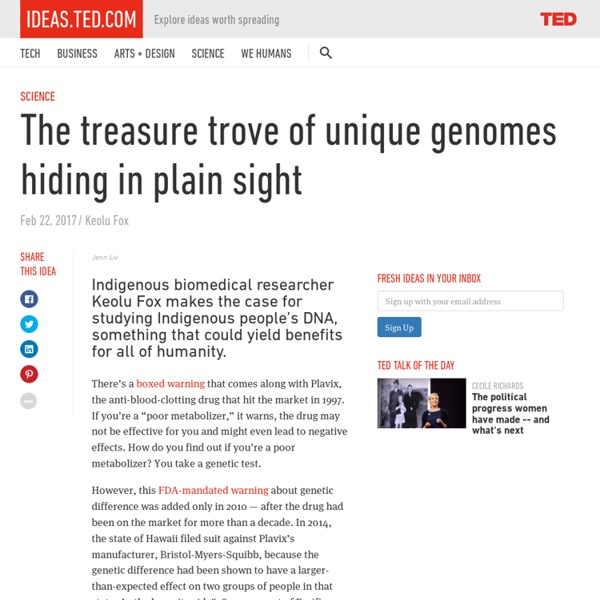 Jenn Liv There’s a boxed warning that comes along with Plavix, the anti-blood-clotting drug that hit the market in 1997. If you’re a “poor metabolizer,” it warns, the drug may not be effective for you and might even lead to negative effects. How do you find out if you’re a poor metabolizer? You take a genetic test. However, this FDA-mandated warning about genetic difference was added only in 2010 — after the drug had been on the market for more than a decade. How did a drug like this get through the American drug testing process, while being so ineffective for two large groups of people in the US? Why do Indigenous people have genetic differences? What we’re finding is, some of these diseases may represent adaptations to our ancestors’ local conditions. There are some major challenges to studying Indigenous genomes. In addition, diverse genes can help us understand the complicated way in which diseases work.

How Bill Gates-backed vegan Beyond Meat is winning over meat-eaters Whatever your burger pleasure, targeting meat-eaters is a smart move — there are way more of them than there are vegans and vegetarians. Only 5 percent of Americans identify as vegetarian and 3 percent vegan, according to a 2017 Gallup poll. Those numbers haven't changed much in the last decade or so. Brown says the company found that 93 percent of the consumers in conventional grocery stores that are buying a Beyond Meat product are also putting animal meat their basket. "So they're buying not only plant based meat, but they're buying animal meat and that's a really important breakthrough for us," Brown tells CNBC Make It. One tipping point in bringing plant-based "meat" to the masses has been the increase in product quality thanks to brands like Beyond Meat, James Kenji López-Alt, chef/partner at Wursthall restaurant in San Mateo, California, tells CNBC Make It.

Tribal Fishing Rights Activist Billy Frank Jr. Statue to Be Placed in U.S. Capitol OLYMPIA, Wash. — When longtime tribal treaty rights warrior Billy Frank, Jr. died unexpectedly on May 6, 2014 at the age of 83, S’Klallman Tribal Chairman W. Ron Allen said, “He was bigger than life. It’s a very sad day for all of us.” Billy Frank Jr. Circumcision: Social, Sexual, Psychological Realities We continue examining myths about circumcision, including traditions, social and sexual relations. NOTE: Primary author is Lillian Dell'Aquila Cannon (see her blog), with assistance from Dan Bollinger Part 3 article continues after advertisement Myth: You have to circumcise the baby so that he will match his dad. Eerie Photos of History's Deadliest Pandemic In 1918, it is estimated that about 500 million people — or about one third of the world’s population — caught influenza, otherwise known at the time as the “Spanish Flu." It was the deadliest disease outbreak in recorded history, with between 50 million and 100 million people worldwide being killed. In the United States alone, 675,000 died and the average life expectancy fell by about 12 years between 1917 to 1918. The virus spread quickly because of World War I, with soldiers in close quarters passing the disease to one another then traveling far and wide, spreading the disease throughout the world. There was no vaccine at the time to protect against infection (the first licensed flu vaccine didn’t appear in the US until the 1940s) and there was no antiviral medication to treat it once infected.

Canada’s Supreme Court says Native American Richard Desautel has right to hunt in Canada The ruling in the case of Richard Desautel, a U.S. citizen and member of the Lakes tribe of the Colville Confederated Tribes in Washington state, ended a legal battle that began in 2010 when he shot a cow elk in the Arrow Lakes region of British Columbia. Story continues below advertisement He alerted a conservation officer and was charged with hunting without a license and hunting big game while not a resident of British Columbia. He intended his action to be a test case. Desautel argued that he was exercising his right under Section 35 of Canada’s Constitution Act, which recognizes and affirms rights afforded to “aboriginal peoples of Canada.” Plastic leachates impair growth and oxygen production in Prochlorococcus , the ocean’s most abundant photosynthetic bacteria Plastic leachates negatively affect Prochlorococcus growth Leachates of common plastic items (HDPE shopping bags and PVC matting) were made using a base of sterile artificial seawater. Exponential phase cultures of Prochlorococcus were inoculated into media containing a range of leachate dilutions (generated by volume/volume dilutions in AMP1 media of 50, 25, 12.5, 6.25 and 3.125% for HDPE; 10, 2, 1, 0.5 and 0.25% for PVC) alongside equivalent controls (AMP1 media with no leachate addition).

Medicaid work requirements: Where do they stand after the blue wave? The 2018 midterm elections have dealt a significant setback to President Trump’s agenda in the legislative arena. However, there are still many ways for the Trump administration to keep swinging away at the Affordable Care Act. One particularly effective unilateral instrument is the regulatory process – that is, the implementation of statutory law by executive agencies.

Growing Native Sovereignty on Earth Day Details By Sebastian Africano & Dr. Valerie Small April 22, 2021 This Earth Day, tens of thousands of Ponderosa Pine, Douglas Fir, Plains Cottonwood, Coyote Willow, Chokecherry, Buffalo Berry, and Wild Plum grown at the Colorado State Forest Service Nursery in Fort Collins are ready to be picked up and delivered to Tribal communities across the Western U.S, growing not just trees, but a movement. For generations, Indigenous peoples have grown and tended trees to meet human needs - but the forests remaining on Native Lands are losing their capacity to do so.

Octopuses May Go Blind As Climate Change Sucks Oxygen Out of the Ocean Editor's Note: This story was updated at 11:20 a.m. E.D.T. on Friday, May 17 Turning light particles into visual information is hard work, and your body relies on oxygen to get the job done. This is true whether you walk the land on two limbs or swim through the sea with eight. In fact, according to a recent study in the Journal of Experimental Biology, the amount of oxygen available to marine invertebrates like squids, crabs and octopuses may be far more important to their vision than previously thought. In the study, published online April 24, researchers saw a significant drop in retinal activity in four species of marine larvae (two crabs, an octopus and a squid) when the animals were exposed to reduced-oxygen environments for as little as 30 minutes. [8 Crazy Facts About Octopuses]