Climate change: The massive CO2 emitter you may not know about 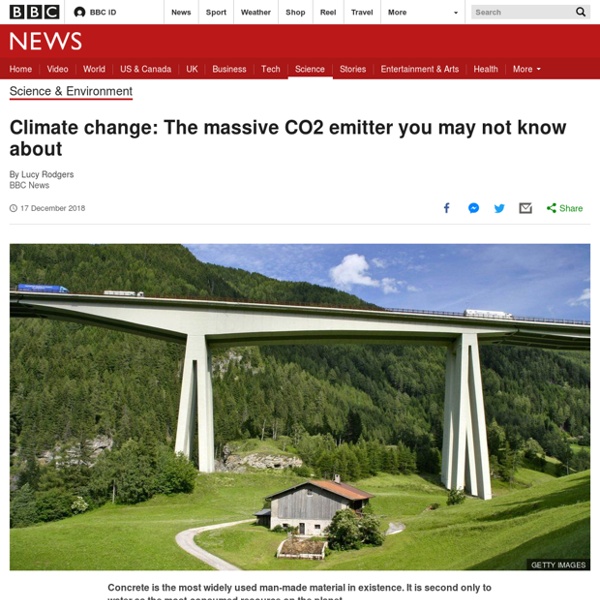 Image copyright Getty Images Concrete is the most widely used man-made material in existence. It is second only to water as the most-consumed resource on the planet. But, while cement - the key ingredient in concrete - has shaped much of our built environment, it also has a massive carbon footprint. Cement is the source of about 8% of the world's carbon dioxide (CO2) emissions, according to think tank Chatham House. If the cement industry were a country, it would be the third largest emitter in the world - behind China and the US. Cement industry leaders were in Poland for the UN's climate change conference - COP24 - to discuss ways of meeting the requirements of the Paris Agreement on climate change. So, how did our love of concrete end up endangering the planet? In praise of concrete As the key building material of most tower blocks, car parks, bridges and dams, concrete has, for the haters, enabled the construction of some of the world's worst architectural eyesores. 'Action needed' 1.

Radical UK hydrogen car revealed A ground-breaking hydrogen-powered city car, which has been designed in Britain and financed by the grandson of Ferdinand Porsche, is to be unveiled next week. Autocar can reveal that the Riversimple Urban Car will have a far smaller fuel cell than in current industry prototypes and thus needs less hydrogen to be stored on board and in fuelling stations. The vehicle is no bigger than a Smart car, weighing just 350kg, and has been developed over three years by teams at Oxford and Cranfield universities.

We built a sim of world's climate battle – here's what happened when delegates played it at COP24 It is the middle of the 2040s. After years of warning, scientists have just confirmed that the tipping point for the West Antarctic Ice Sheet has been triggered. Governments around the world are horrified as the news filters through. The days when they could reverse climate change by cutting carbon emissions to reduce global temperatures have just come to an end. There is now no way of stopping global sea levels from rising by over four metres. Raspberry Pi Blog - News, Announcements, and Ideas Looking for this year’s perfect something to put under the tree ‘from Santa’? Well, look no further than right here — it’s time for our traditional Christmas shopping list! Woohoo! Which Raspberry Pi?

*****Atmospheric CO2: drivers (animation) Discussion While we measure the amount of CO2 in the atmosphere in mere parts per million (ppm), this small amount has a substantial effect on the temperature at the surface of the Earth. The amount has now increased by 40% since the industrial revolution, leading directly to increased temperatures worldwide. There are four main drivers of the changes in the level of CO2 in the atmosphere. The seasonal cycle The first is the seasonal cycle, dominated by the forests of the northern hemisphere, absorbing CO2 via photosynthesis in summer and spring, and then, in autumn and winter, the decay of their fallen leaves to release some of that CO2 back into the atmosphere.

Lack of female role models undermining STEM career paths Role models have a great impact on one’s life choices. Teenagers who have positive role models have greater self-esteem and perform better in school than teenagers without role models in their lives, according to research. One will try to follow a role model’s footsteps, which can be done both consciously and unconsciously. Climate change: Oceans 'soaking up more heat than estimated' Image copyright Getty Images The world has seriously underestimated the amount of heat soaked up by our oceans over the past 25 years, researchers say. Their study suggests that the seas have absorbed 60% more than previously thought. They say it means the Earth is more sensitive to fossil fuel emissions than estimated.

The Highlights of Auto Futures Live: The Future of Fuel - Auto Futures Reading Time: 3 minutes Auto Futures Live: The Future of Fuel was held at the Thomson Reuters HQ in London on October 29th. The event brought together journalists, leading brands and industry professionals, including an inspiring panel. The discussion and Q&A session featured a thought-provoking discussion, including policy-making, the air quality crisis, infrastructure and, of course, which fuel will rule. From hydrogen and battery electric vehicles to synthetic fuels and the internal combustion engine, our panel and audience explored the pros and cons of each propulsion.