Macron condemned the rise of nationalism in front of Trump and Putin, warning that 'old demons are reawakening' 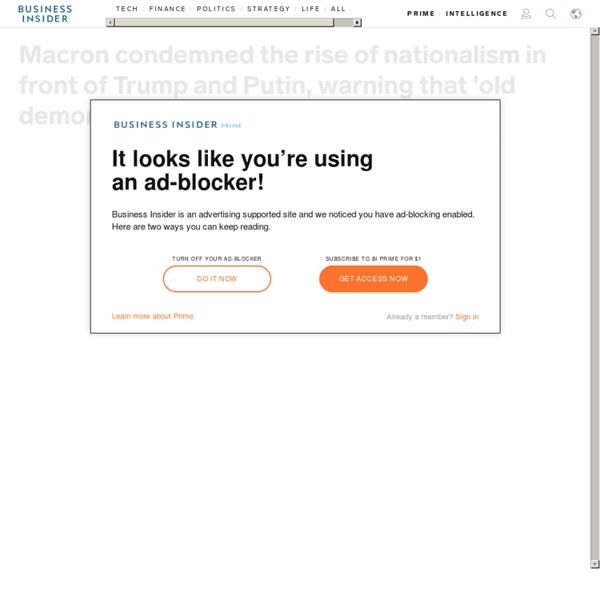 PARIS (Reuters) - French President Emmanuel Macron used an address to world leaders gathered in Paris for Armistice commemorations on Sunday to send a stern message about the dangers of nationalism, calling it a betrayal of moral values. With US President Donald Trump and Russian President Vladimir Putin sitting just a few feet away listening to the speech via translation earpieces, Macron denounced those who evoke nationalist sentiment to disadvantage others. "Patriotism is the exact opposite of nationalism: nationalism is a betrayal of patriotism," Macron said in a 20-minute address delivered from under the Arc de Triomphe to mark the 100th anniversary of the end of World War One. "By pursuing our own interests first, with no regard to others', we erase the very thing that a nation holds most precious, that which gives it life and makes it great: its moral values." There was no immediate response from either the White House or the Kremlin to Macron's comments. Benoit Tessier/Pool via AP

Could consciousness all come down to the way things vibrate? Why is my awareness here, while yours is over there? Why is the universe split in two for each of us, into a subject and an infinity of objects? How is each of us our own center of experience, receiving information about the rest of the world out there? Why are some things conscious and others apparently not? In the Age of A.I., Is Seeing Still Believing? In 2011, Hany Farid, a photo-forensics expert, received an e-mail from a bereaved father. Three years earlier, the man’s son had found himself on the side of the road with a car that wouldn’t start. When some strangers offered him a lift, he accepted. A few minutes later, for unknown reasons, they shot him. A surveillance camera had captured him as he walked toward their car, but the video was of such low quality that key details, such as faces, were impossible to make out. The other car’s license plate was visible only as an indecipherable jumble of pixels.

Job Openings Bunk The Republican National Committee and others have taken to claiming that the number of job openings exceeds the number of job seekers for the first time “in history,” a sweeping claim that is without factual support, and likely false. It’s true that the number of unfilled job openings is now greater than the number of unemployed people for the first time on record, but records only go back 18 years. Despite what some GOP spinmeisters would have you believe, “history” didn’t start in December of 2000. That’s when the Bureau of Labor Statistics began its Job Openings and Labor Turnover Survey. And BLS says, “Prior to JOLTS, there was no economic indicator of the unmet demand for labor with which to assess the presence or extent of labor shortages in the United States. ” Make no mistake, it’s remarkable when job openings exceed the number of jobless, as happened back in March, and several times since.

Growing Up Surrounded by Books Has a Lasting Positive Effect on the Brain, Says a New Scientific Study Image by George Redgrave, via Flickr Commons Somewhere in the annals of the internet--if this sprawling, near-sentient thing we call the internet actually has annals--there is a fine, fine quote by filmmaker John Waters: We need to make books cool again. If you go home with somebody and they don’t have books, don’t fuck them. Don’t let them explore you until they’ve explored the secret universes of books. Soy formula feeding during infancy associated with severe menstrual pain in adulthood News Release Friday, November 9, 2018 New research suggests that infant girls fed soy formula are more likely to develop severe menstrual pain as young adults. The finding adds to the growing body of literature that suggests exposure to soy formula during early life may have detrimental effects on the reproductive system. The study appears online in the journal Human Reproduction. Scientists at the National Institute of Environmental Health Sciences (NIEHS), part of the National Institutes of Health, along with collaborators from Vanderbilt University Medical Center in Nashville, Tennessee, and the Henry Ford Health System in Detroit, examined data from 1,553 African-American women, aged 23-35, participating in the NIEHS Study of Environment, Lifestyle, and Fibroids (SELF).

Fact-checking misinformation about the migrant caravan Misinformation about a migrant caravan heading to the United States is spreading on Facebook and other social media platforms with users sharing false or misleading memes and posts that paint a skewed version of the facts. PolitiFact has fact-checked many of those claims. A hurricane about to strike the caravan? False. Suicide more prevalent than homicide in US, but most Americans don't know it In the United States, suicide is twice as common as homicide -- and more often involves firearms -- but public perception is just the opposite. News reports, movies and TV shows may contribute to the perception of a high risk of firearm homicide, authors of a new study say, leaving a substantial gap between ideas and reality and potentially leading to further danger. Now, first-of-its kind research, led by the University of Washington, Northeastern University and Harvard University, delves into public perceptions of gun violence and the leading causes of death in the U.S. The study, published Tuesday in the Annals of Internal Medicine, seeks to facilitate national public discussions about firearm ownership and storage. "This research indicates that in the scope of violent death, the majority of U.S. adults don't know how people are dying," said Erin Morgan, lead author and doctoral student in the Department of Epidemiology at the UW School of Public Health.

Tropical disease outbreaks are growing threat in Europe as temperatures rise Europe is facing a growing threat of tropical disease outbreaks, as rising temperatures linked to climate change cause illnesses brought by travellers to spread more easily, health experts warned. This summer has seen a sharp spike in West Nile virus infections in Europe, following soaring temperatures, compared with the past four years. Until the middle of August, 400 cases of the disease, which is carried by mosquitos, were recorded in Europe, with 22 fatalities, according to the European Centre for Disease Prevention and Control (ECDC). Countries affected include Italy, Greece, Hungary, Serbia and Romania, all of which have recorded cases of the tropical infection in the past. The spike was due to an early start to the transmission season, caused by high temperatures followed by wet weather, conditions ideally suited to mosquito breeding, according to the World Health Organization’s regional office for Europe.

Trump Engaged in Suspect Tax Schemes as He Reaped Riches From His Father President Trump participated in dubious tax schemes during the 1990s, including instances of outright fraud, that greatly increased the fortune he received from his parents, an investigation by The New York Times has found. Mr. Trump won the presidency proclaiming himself a self-made billionaire, and he has long insisted that his father, the legendary New York City builder Fred C. Get Your Grok On A tool-strand post in an ongoing 2-strand series about Information Literacy How can we foster a “slow search” approach that maximizes what we don’t know through discovery? How can we take advantage of what we don’t know and use it more effectively in developing a search strategy? How can the quest for quality also be built into the quest for information? Fact or Fiction? Kids like to search Google—and they think they are pretty good at it.Kids like to search Google using questions instead of keywords, terms or concepts.Kids expect to get acceptable answers to their questions—and tend to accept what they get.

Common chemical linked to language delay in children MONDAY, Oct. 29, 2018 -- Children may suffer delayed language skills if their mothers come in contact with common chemicals called phthalates in early pregnancy, new research suggests. Phthalates are in countless products from nail polish and hair spray to food packaging and vinyl flooring. As plasticizers, they make things more pliable; as solvents, they enable other substances to dissolve. In the new study, researchers found that the risk for language delay at about age 3 years was up to 30 percent higher among children whose mothers had higher exposure to two phthalates in particular: dibutyl phthalate (DBP) and butyl benzyl phthalate (BBP). Both chemicals are in products such as older vinyl flooring, cosmetics and plastic toys. "Phthalates are known to be hormonally active and affect the body's hormone system," said researcher Shanna Swan, a professor of environmental and public health at the Icahn School of Medicine at Mount Sinai in New York City.

4 Ways Fred Trump Made Donald Trump and His Siblings Rich In Donald J. Trump’s version of how he got rich, he was the master dealmaker who parlayed an initial $1 million loan from his father into a $10 billion empire. It was his guts and gumption that overcame setbacks, and his father, Fred C. Trump, was simply a cheerleader. But an investigation by The New York Times shows that by age 3, Donald Trump was earning $200,000 a year in today’s dollars from his father’s empire. He was a millionaire by age 8.

Column: This is what happens when you take Ayn Rand seriously “Ayn Rand is my hero,” yet another student tells me during office hours. “Her writings freed me. They taught me to rely on no one but myself.” As I look at the freshly scrubbed and very young face across my desk, I find myself wondering why Rand’s popularity among the young continues to grow. Thirty years after her death, her book sales still number in the hundreds of thousands annually — having tripled since the 2008 economic meltdown.