We don’t want billionaires’ charity. We want them to pay their taxes 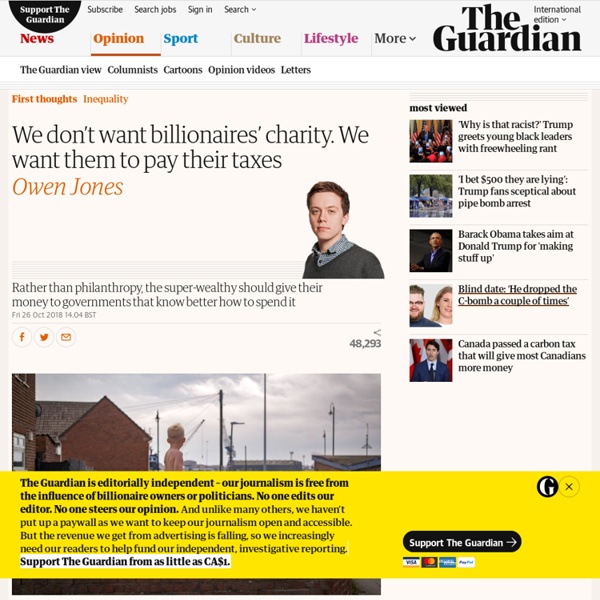 “Charity is a cold, grey loveless thing. If a rich man wants to help the poor, he should pay his taxes gladly, not dole out money at a whim.” It is a phrase commonly ascribed to Clement Attlee – the credit actually belongs to his biographer, Francis Beckett – but it elegantly sums up the case for progressive taxation. According to a report by the Swiss bank UBS, last year billionaires made more money than any other point in the history of human civilisation. Their wealth jumped by a fifth – a staggering $8.9tn – and 179 new billionaires joined an exclusive cabal of 2,158. Some have signed up to Giving Pledge, committing to leave half their wealth to charity. Who can begrudge the generosity of the wealthy, you might say. And he’s right: rich people and major corporations have the means to legally avoid tax. There’s another issue, too. • Owen Jones is a Guardian columnist … some things have changed. The Guardian is editorially independent.

Election interference has been going on for years. The reason? Voter purges In every American election there are some voters who show up to their polling place ready to cast a ballot, only to find their name isn’t on the registration list. The reason? Voter purges, an often flawed effort to update voter rolls by removing voters’ names from registration lists. Virginians fell victim in 2013, when nearly 39,000 voters were removed when the state relied on faulty data to determine which names should be deleted. "On My Block" and "In the Long Run" give working-class people the loving portraits they deserve In 1936, George Orwell gave up his part-time job as a bookshop assistant in London and headed north on a fact-finding mission. His subject? The English working class.

Religion and refugees are deeply entwined in the US Robert Bowers lashed out at what he believed to be a Jewish plot to bring more refugees and asylum seekers to the U.S. before allegedly murdering 11 people at the Tree of Life synagogue in Pittsburgh. Bowers’s claim that HIAS, a prominent Jewish humanitarian organization, was bringing migrants from Honduras, El Salvador and Guatemala northward to commit violence was false. But it is true that many religious communities in the U.S., including American Jews, have long supported refugees and asylum-seeking migrants who arrive in the U.S. In my research on the nonprofits that resettle and assist these newcomers, I’ve found that while religious communities continue to do this work through faith-based nonprofits and individual congregations, there are signs that some white Christians no longer support this mission. Religious advocacy on behalf of refugees

What do incels, fascists and terrorists have in common? Violent misogyny The apparent connection of recent murders in Toronto to the “incel” movement has led to a torrent of commentary. Too much of it has appeared to rationalise Alek Minassian’s actions. Just yesterday, New York Times columnist Ross Douthat made their major gripe – that the world denies them sex – into the basis of a kind of seminar room thought experiment, wondering whether a redistribution of sex might not be “entirely responsive to the logic of late-modern sexual life”.

Driven by Trump Policy Changes, Fracking Booms on Public Lands To proponents, the Trump administration is putting government-owned land to good use, with big returns for taxpayers. Nationally, oil production on federal lands is rising at an extraordinary pace, jumping 25 percent in the first seven months of this year compared with 2016, the last year of the Obama administration. That boom has driven up government revenue from lease sales and royalties collected from oil and gas production on federal lands, which is shared with the states. The unseen driver behind the migrant caravan: climate change Thousands of Central American migrants trudging through Mexico towards the US have regularly been described as either fleeing gang violence or extreme poverty. But another crucial driving factor behind the migrant caravan has been harder to grasp: climate change. Most members of the migrant caravans come from Guatemala, Honduras and El Salvador – three countries devastated by violence, organised crime and systemic corruption, the roots of which can be traced back to the region’s cold war conflicts. Experts say that alongside those factors, climate change in the region is exacerbating – and sometimes causing – a miasma of other problems including crop failures and poverty. And they warn that in the coming decades, it is likely to push millions more people north towards the US. “The main reason people are moving is because they don’t have anything to eat.

How Russia is growing its strategic influence in Africa Much has been made about China’s role and profile in Africa and the factors underlying its activities on the continent. Less debated is the spread and depth of Russia’s contemporary presence and profile in Africa. There was a strong Russian influence in Africa during the heyday of the Soviet Union. The post-independence governments of Angola, Mozambique, Guinea-Bissau, Democratic Republic of Congo, Egypt, Somalia, Ethiopia, Uganda and Benin at some point all received diplomatic or military support from the Soviet Union. But this began to change after the superpower started to collapse in December 1991. More than a quarter of a century later Russia’s President Vladimir Putin seems to have new aspirations in Africa.