Yes, eating meat affects the environment, but cows are not killing the climate 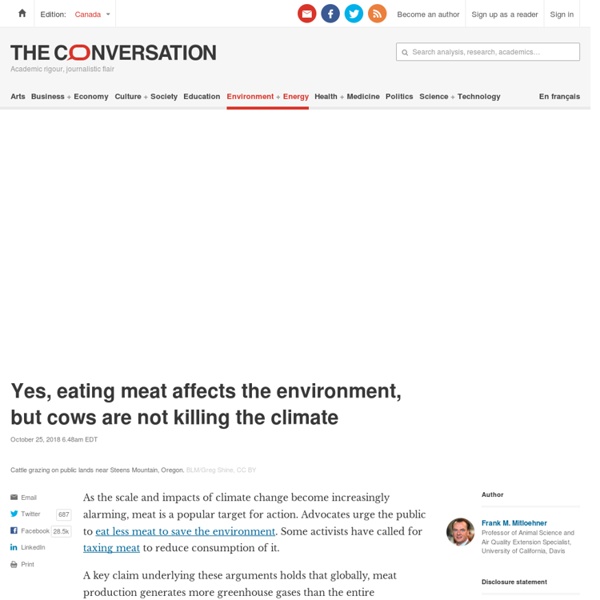 As the scale and impacts of climate change become increasingly alarming, meat is a popular target for action. Advocates urge the public to eat less meat to save the environment. Some activists have called for taxing meat to reduce consumption of it. A key claim underlying these arguments holds that globally, meat production generates more greenhouse gases than the entire transportation sector. However, this claim is demonstrably wrong, as I will show. And its persistence has led to false assumptions about the linkage between meat and climate change. My research focuses on ways in which animal agriculture affects air quality and climate change. Setting the record straight on meat and greenhouse gases A healthy portion of meat’s bad rap centers on the assertion that livestock is the largest source of greenhouse gases worldwide. According to the U.S. Why the misconception? This latter claim was wrong, and has since been corrected by Henning Steinfeld, the report’s senior author. Related:  Enviro • Interesting Articles

Office Politics Getting You Down? Here's How to Survive... and Thrive — Alli Polin | Break The Frame Office politics are like a dirty word. We say it while cringing and it’s usually accompanied by a barely perceptible eye roll. Often, when people are asked how they describe office politics, the first word that comes to mind is painful. Oh, and stressful. Not to mention nasty… Quick! Last week, we had someone I didn’t know well over for dinner, and when I asked him about work, he said, “It’s good. It’s not something new to hear that the worst part of working for a company is the politics. Like your job and your company but just wish the politics would disappear? Don’t Remain Heads Down (if I don’t see it, it doesn’t exist) Yes, it’s a good thing to be a focused hard worker. Stop Testing the Waters – do you agree with me? Some people will throw out breadcrumbs and see if you pick them up. Make Friends With People You Like and Respect You don’t have to ingratiate yourself to the office bully to survive office politics. Avoid Taking Sides (and don’t take all sides) Live the Golden Rule

Capitalism Will Solve the Climate Problem Capitalism Will Solve the Climate Problem Skeptics try to deny the evidence of global warming, but businesses already are betting on clean energy. Together, science and capitalism built the modern world. But across the political spectrum, both are under attack. If we are to solve our greatest challenges, including climate change, we have to deploy the power of these twin engines of civilization. The best available research confirms the existence of human-driven climate change, including the rapid pace of global warming. Most climate models predicted warming above the mid-20th-century average of about 1 degree Celsius by 2016. These results aren’t surprising, given that they are based on many independent data sets. It’s a sign of the reliability of this research that the insurance industry, with trillions in liability at stake, uses it to determine financial models. Unfortunately, skeptics have fostered doubt about climate change by misrepresenting the research. —Mr.

You are never truly vegan writes farmer Matthew Evans : News | The CEO Magazine For every 75 hectares of peas, 1,500 animals die each year, including possums, wallabies, ducks and deer, not to mention rodents, writes Matthew Evans. By Ian Horswill Posted on July 9, 2019 Being vegan means you think that animals are not killed in the production of what you eat. However Matthew Evans, a former food critic who now calls himself a gourmet farmer and restauranteur, says that notion is simply untrue. In his new book, On Eating Meat: The Truth About Its Production And The Ethics Of Eating It, Evans writes the uncomfortable truth that animals die regardless of whether we choose to eat meat or not. “It’s quite possible that eating less meat might mean less suffering. “When you eat, you’re never truly vegan. He says about 40,000 ducks are killed each year to protect rice production in Australia; that a billion mice are poisoned every year to protect wheat in Western Australia alone, and apple growers can kill up to 120 possums a year to protect their orchards.

How lab heads can learn to lead New principal investigators (PIs) tend to be thrust into a role that includes administration and management, budgeting, lab infrastructure, mentoring and — perhaps most difficult — shepherding junior scientists to achieve their full potential. Many researchers receive little training in leadership skills to help them adapt. And the problem is not limited to just new PIs. In Nature’s 2017 survey of PhD students, one-quarter of the respondents were dissatisfied with their adviser’s guidance on research, and only one-third said that their supervisors gave useful advice about non-academic careers. Nature asked leadership experts what lessons other industries can offer to help scientists become more-effective PIs. PETER HIRST: Treat science like a business Associate dean of executive education at the Massachusetts Institute of Technology (MIT) Sloan School of Management in Cambridge. There are ways to measure the impact of your work and to improve the return on resources you’re putting in.

Why you may not need to worry about Ontario farmed fish after all Are farmed fish good or bad for the environment? The answer, according to research published last week, is: it’s complicated. A decade-long study into the effect of farming rainbow trout in the Experimental Lakes Area, located between Kenora and Dryden, in Ontario’s northwest, was published in the journal Freshwater Biology last week, and the results are surprising. When scientists added a fish farm to an otherwise untouched small lake at the ELA, the populations of some wild fish boomed relative to those in a control lake where no farmed fish were added. Some evidence — gleaned primarily through poorly sited farms from the industry’s early days and from other jurisdictions — has suggested that aquaculture can cause serious ecological problems, but those failed to appear. “We really overloaded the lake, and we did not cause the sort of things that people are scared about.” says Cheryl Podemski, a scientist with Fisheries and Oceans Canada and one of the lead researchers on the study.

You can now go to prison in Canada for providing raw milk. Seriously As Canada ambles along towards the day when its prisons will empty of people who did nothing more heinous than possess marijuana, the province of Ontario appears eager to fill its empty jail cells with individuals whose so-called crime was distributing raw milk. On Jan. 5, 2018, Justice P. W. Sutherland of Ontario’s Superior Court of Justice imposed an injunction in a case called Downing v. As is often the case when raw milk makes headlines, the case involved farmer Michael Schmidt, who has campaigned for decades for the legal right to fill the niche market for unpasteurized milk and cheese. So if you’re reading this article, and you’re among the probably hundreds of Ontarians who distribute unpasteurized milk or milk products, then you should stop reading immediately, try to forget everything you’ve read so far, or at least never admit to having read it. But that won’t be the only unintended consequence of the order. Schmidt’s operation has a 25-year history of safety.

Leading change: The nonsense of urgency – Woodland Decay Post in 40 words Creating urgency has become synonymous with leading change to the detriment of individuals, organizations, and societies. The more leaders create these artificial crises, the less we trust and engage with our leaders and the less effective their change leadership becomes. Introduction The sense of urgency on a major organizational change was famously likened to a burning platform (Conner, 1998). How did Kotter encourage a sense of urgency? Kotter (2008) devoted a book to change leaders creating this sense of urgency, which was the third of Kotter’s (1996/2012) eight leading change steps. Visible crises can be enormously helpful in catching people’s attention and pushing up urgency levels. Whereas, Andy jumped from the burning platform because it was a case of ‘jump or fry’, Kotter (1996) appears to pre-empt the fire with the change leader encouraged to engineer a sense of urgency so that the ‘building seems to be on fire.’ Why is change urgency problematic? Further Reading

How to improve education: move the classroom outdoors When nature is used as a classroom, it has a positive effect on learning among children in at least eight different ways, according to a new survey of the research. Scientists suggest exposing students to natural environments goes beyond making them appreciate life on the planet — it improves a child's ability to learn and can even improve grades, especially in disadvantaged children. The American survey collected peer-reviewed studies that examined the learning outcomes of students who had been taken out of the classroom to not only go on wilderness backpacking hikes, or visit a wetland or a nature centre, but who also held traditional classes in outdoor settings. Among the outcomes, the experiences boosted academic learning, improved personal development and heightened a sense of environmental stewardship. The many benefits to taking the class outdoors Children on a field trip exploring nature and searching for wildlife in a dipping pond. Of course, not all schools have a forest nearby.

Feminist journalist banned from Twitter for writing 'men aren't women' speaks out | The Christian Post The feminist journalist Twitter permanently suspended last week for writing such things as "men aren't women," is urging everyone to speak out regarding transgender activism and big tech censorship. The social media giant, she notes, seems to have a particular problem with women who dissent from the claims of transactivists and they unfairly hijack the dialogue about these issues. Meghan Murphy, the Vancouver, British Columbia-based founder and editor of the independent website Feminist Current, has never shied away from criticizing and asking questions about transgender ideology, often highlighting the threat it poses to women's rights. Yet in recent months, efforts to silence her have notably increased. "It’s about a cultish movement that is flexing its muscle on campuses, in civic organizations, at public events, and in the back offices of social-media companies, to strike down anyone who dares point out that the gender emperor wears no clothes. All of it is scary and dangerous.