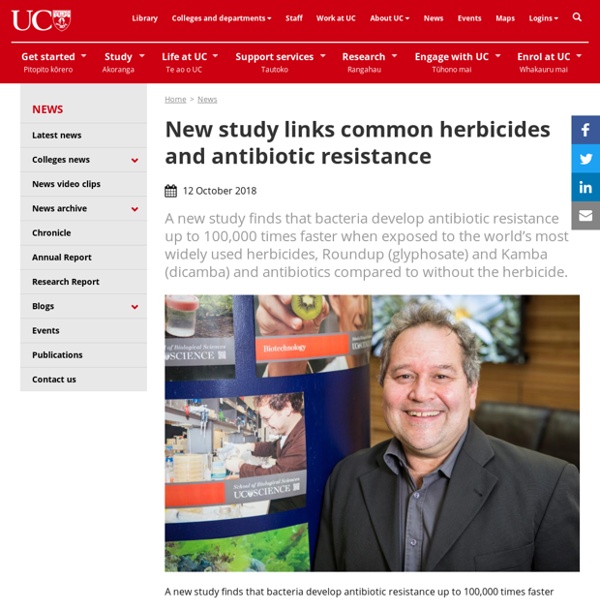 Related:  know about world • Useful information • The Only Earth We Have

Plummeting insect numbers 'threaten collapse of nature' The world’s insects are hurtling down the path to extinction, threatening a “catastrophic collapse of nature’s ecosystems”, according to the first global scientific review. More than 40% of insect species are declining and a third are endangered, the analysis found. The rate of extinction is eight times faster than that of mammals, birds and reptiles. The total mass of insects is falling by a precipitous 2.5% a year, according to the best data available, suggesting they could vanish within a century. The planet is at the start of a sixth mass extinction in its history, with huge losses already reported in larger animals that are easier to study. More acidic oceans 'will affect all sea life' Image copyright JAGO-TEAM/GEOMAR All sea life will be affected because carbon dioxide emissions from modern society are making the oceans more acidic, a major new report will say. The eight-year study from more than 250 scientists finds that infant sea creatures will be especially harmed. This means the number of baby cod growing to adulthood could fall to a quarter or even a 12th of today's numbers, the researchers suggest. The assessment comes from the BIOACID project, which is led from Germany.

Behold Sparklemuffin and Skeletorus, New Peacock Spiders If you don't think of spiders as cute and cuddly, then you’ve never met Sparklemuffin, Skeletorus, and the elephant spider. Scientists have identified these three new species of peacock spiders in various parts of eastern Australia. Less than a quarter-inch long (five millimeters), male peacock spiders are known for their bright colors and a rolling-shaking mating dance that would make Miley Cyrus jealous.

Richest 1% on target to own two-thirds of all wealth by 2030 The world’s richest 1% are on course to control as much as two-thirds of the world’s wealth by 2030, according to a shocking analysis that has lead to a cross-party call for action. World leaders are being warned that the continued accumulation of wealth at the top will fuel growing distrust and anger over the coming decade unless action is taken to restore the balance. An alarming projection produced by the House of Commons library suggests that if trends seen since the 2008 financial crash were to continue, then the top 1% will hold 64% of the world’s wealth by 2030. Even taking the financial crash into account, and measuring their assets over a longer period, they would still hold more than half of all wealth. Since 2008, the wealth of the richest 1% has been growing at an average of 6% a year – much faster than the 3% growth in wealth of the remaining 99% of the world’s population. Should that continue, the top 1% would hold wealth equating to $305tn (£216.5tn) – up from $140tn today.

A quantum experiment suggests there’s no such thing as objective reality Back in 1961, the Nobel Prize–winning physicist Eugene Wigner outlined a thought experiment that demonstrated one of the lesser-known paradoxes of quantum mechanics. The experiment shows how the strange nature of the universe allows two observers—say, Wigner and Wigner’s friend—to experience different realities. Since then, physicists have used the “Wigner’s Friend” thought experiment to explore the nature of measurement and to argue over whether objective facts can exist.

The Best Emergency Preparedness Supplies for 2019: Reviews by Wirecutter The key tools to have on hand for an emergency—everything from an atlas to good duct tape—are also key tools to have on hand for life in general. A common theme that we noticed in this category is that while a great tool can be a genuine joy to use and serve you well for years (if not decades), cheap imitators will waste both your money and your time. Go for the good stuff. —KT Greta Thunberg hits back at Mnuchin criticism over climate crisis DAVOS, Switzerland — Swedish climate activist Greta Thunberg hit back at Steven Mnuchin on Thursday, after the Treasury Secretary suggested she needed to study economics at college before lecturing the U.S. on fossil fuel investments. “My gap year ends in August, but it doesn’t take a college degree in economics to realise that our remaining 1,5° carbon budget and ongoing fossil fuel subsidies and investments don’t add up,” the 17-year-old said via Twitter. “So either you tell us how to achieve this mitigation or explain to future generations and those already affected by the climate emergency why we should abandon our climate commitments,” she added. Mnuchin had criticized Thunberg’s financial credentials at the World Economic Forum earlier in the day.

Related:
Related:  know about world   -  Useful information   -  The Only Earth We Have