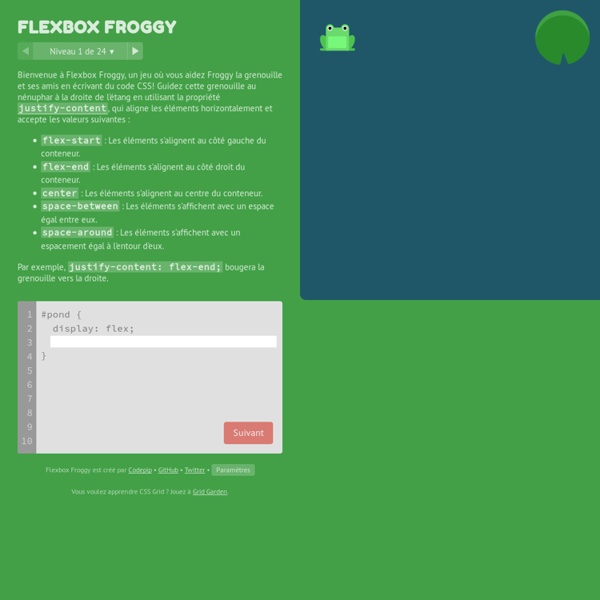 Tutorials Archives Tutorials In this section you will find in-depth how-tos involving common web development and web design techniques. Twisted Colorful Spheres with Three.js Faire un sticky footer Creating a sticky footer is one of the most common web development tasks you can easily solve with flexbox. Without a sticky footer, if you don’t have enough content on the page, the footer “jumps” up to the middle of the screen, which can completely ruin the user experience. Before flexbox, developers used negative margins to force the footer down to the bottom of the page. Luckily, we don’t need such a hack anymore! In this article, we will show you an easy technique that allows you to create a sticky footer with flexbox.

Utiliser correctement la balise "alt" Alt text (alternative text) describes an image on a web page. It lives in the HTML code and is not usually visible on the page itself. But what’s so important about alt text? Thinking Outside the Grid Flying into my home city of Tucson, Arizona late one night in November, I was impressed by how rigid a grid the city’s layout is. Tucson is one of America’s planned cities, and from the sky, it’s easy to see that Tucson’s designers succeeded in creating a city in which everything is laid out according to a precise plan (figure 1). Article Continues Below Figure 1 I was returning home from London, which in contrast is far from a rigid grid. London is spirals, circles, tangets, and is often seemingly spontaneous in its design (figure 2).

Best Animation Websites Animation is the rapid display of a sequence of images that create an illusion of movement. The effect is an optical illusion of motion created by the phenomenon of persistence of vision, and can be achieved in several ways, the most common being as a motion picture or video. Animation has been about since before the web began, enhancing visual content and, in many cases, animation is used to highlight the interface. Today, animation is not just part of a websites content, it’s a fundamental feature, essential to increasing interaction with the site.

Visualization: Bar Chart - Google Charts Overview Google bar charts are rendered in the browser using SVG or VML, whichever is appropriate for the user's browser. Like all Google charts, bar charts display tooltips when the user hovers over the data. For a vertical version of this chart, see the column chart. Comment insérer images dans un site web One of the decisions that a front-end developer needs to make while building a website is the technique to include an image. It could be an HTML <img>, or an image via CSS backgrounds, or maybe SVG <image>. Choosing the correct technique is important and can play a huge role in performance and accessibility. In this article, we’ll learn the various ways of including an image in addition to mentioning the advantages and disadvantages of each one, and the context of when and why to use each. Table Of Contents The HTML <img> element