Characteristics and Effects of Uninvolved Parenting 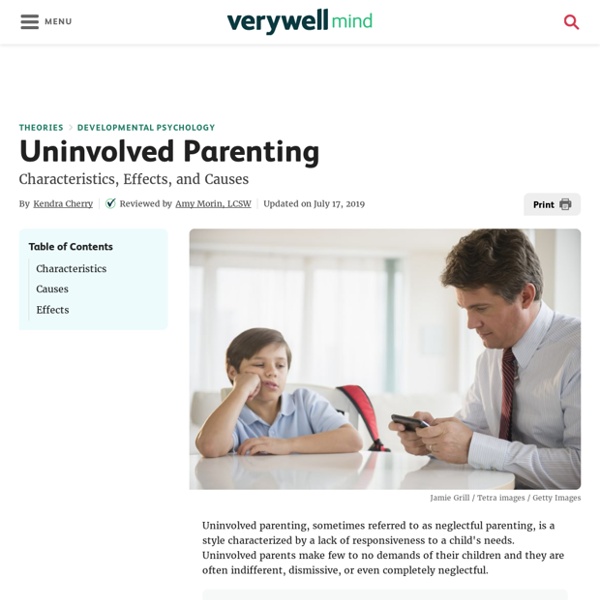 Permissive Parenting: Its Characteristics And Effect On Children Image: Shutterstock Daniel’s parents were highly affectionate to him. He was allowed to sleep late and wake up whenever he wanted. He was allowed to play loud music even if it disturbed the neighbors. He had his way almost all the time. You might wonder if there is any parenting involved at all.

The Definition of Authoritarian Parenting Authoritarian parenting is a parenting style characterized by high demands and low responsiveness. Parents with an authoritarian style have very high expectations of their children, yet provide very little in the way of feedback and nurturing. Mistakes tend to be punished harshly. When feedback does occur, it is often negative. Yelling and corporal punishment are also common in the authoritarian style. What Is Permissive Parenting? Permissive parenting is a type of parenting style characterized by low demands with high responsiveness. Permissive parents tend to be very loving, yet provide few guidelines and rules. These parents do not expect mature behavior from their children and often seem more like a friend than a parental figure. These parents tend to be the polar opposite of the so-called "helicopter parents."

Uninvolved Parenting Style - Traits And Effects on Children Uninvolved or neglectful parenting is a considerably new parenting style that does away with hand-holding and guiding the children. It lets them learn by themselves. Parents could be uninvolved in varying degrees. While most parents look after the basic needs such as food and shelter for their kids, some others neglect their children completely. MomJunction gives you deeper insights into uninvolved or neglectful parenting and whether or not it is healthy for your kids. The authoritarian parenting style: What does it look like? © 2010-2018 Gwen Dewar, Ph.D., all rights reserved The authoritarian parenting style: Little nurturing, lots of psychological control You might have a good handle on what it means to favor authoritarian government: The blind submission to authority. The stifling of autonomous, critical thinking.

Many Singaporeans’ parenting style not helping children succeed - TODAYonline I was disturbed to read the report “MP proposes piloting cluster of schools without exams, streaming” (Jan 22). In the current debate on how best to restructure the education system, more people seem inclined to wash the outside of a dirty cup and call it clean, but leaving the inside filthy as ever. An examination-free education system would serve only to mask the inadequacies of the current generation of pupils, rather than help them to succeed.

Why Parenting Styles Matter When Raising Children Developmental psychologists have long been interested in how parents affect child development. However, finding actual cause-and-effect links between specific actions of parents and later behavior of children is very difficult. Some children raised in dramatically different environments can later grow up to have remarkably similar personalities. Conversely, children who share a home and are raised in the same environment can grow up to have very different personalities.

12 Ways to Become a More Authoritative Parent There isn’t a single formula for raising children well. After all, parenting isn’t an exact science. There’s definitely a bit of an art to good parenting. Researchers who examine parenting styles have consistently found authoritative parents raise happier and healthier children who are equipped to face real-world challenges.

Permissive Parenting: Its Characteristics And Effect On Children Image: Shutterstock Daniel’s parents were highly affectionate to him. He was allowed to sleep late and wake up whenever he wanted. He was allowed to play loud music even if it disturbed the neighbors. He had his way almost all the time.

The Different types of Attachment Styles Children who are securely attached generally become visibly upset when their caregivers leave and are happy when their parents return. When frightened, these children will seek comfort from the parent or caregiver. Contact initiated by a parent is readily accepted by securely attached children and they greet the return of a parent with positive behavior. While these children can be comforted to some extent by other people in the absence of a parent or caregiver, they clearly prefer parents to strangers.