The Plot to Subvert an Election: Unraveling the Russia Story So Far 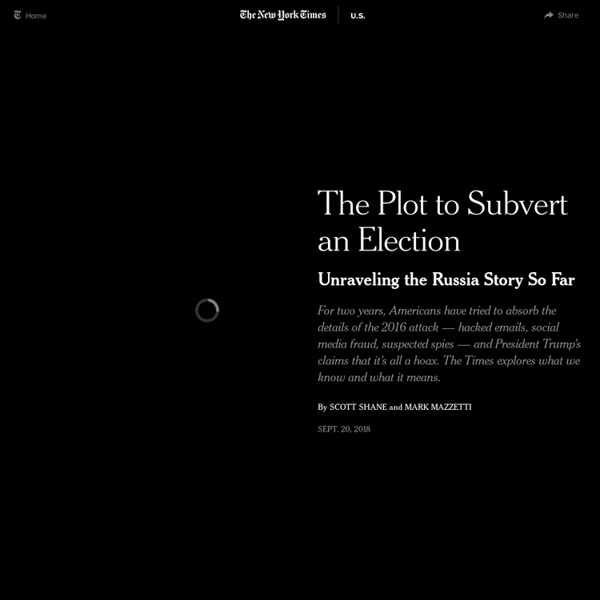 On an October afternoon before the 2016 election, a huge banner was unfurled from the Manhattan Bridge in New York City: Vladimir V. Putin against a Russian-flag background, and the unlikely word “Peacemaker” below. It was a daredevil happy birthday to the Russian president, who was turning 64. In November, shortly after Donald J. Trump eked out a victory that Moscow had worked to assist, an even bigger banner appeared, this time on the Arlington Memorial Bridge in Washington: the face of President Barack Obama and “Goodbye Murderer” in big red letters. Police never identified who had hung the banners, but there were clues. The Kremlin, it appeared, had reached onto United States soil in New York and Washington. For many Americans, the Trump-Russia story as it has been voluminously reported over the past two years is a confusing tangle of unfamiliar names and cyberjargon, further obscured by the shout-fest of partisan politics. And there is a plausible case that Mr. As Mr. Mr. Nina L.

60 Environmental Rules on the Way Out Under Trump 1. Revoked Obama-era flood standards for federal infrastructure projects This Obama-era rule, revoked by Mr. Trump in August, required that federal agencies protect new infrastructure projects by building to higher flood standards. Building trade groups and many Republican lawmakers opposed it as costly and burdensome. Culture - International Women’s Day: Iconic images of women protesters Swedish photographer Hans Runesson captured this moment on 13 April 1985 – and his image has endured since, voted Picture of the Century and resurfacing on social media in 2016 with the call to arms: “Be the woman hitting a neo-Nazi with a handbag you wish to see in the world”. Taken in Växjö, Sweden during a demonstration by the neo-Nazi Nordic Reich Party, the photo shows 38-year-old Danuta Danielsson swiping at one of the marchers with her handbag. The Polish-Swedish passerby, whose family members had reportedly been sent to a Nazi concentration camp, snapped “impulsively”, according to Runesson, who told BBC Culture that the man did “nothing – he walked further” afterwards. Despite the incident happening in a fleeting instance, the photo continues to resonate for many as a silent rallying cry. And it had an eerie parallel in 2016, when social activist Tess Asplund placed herself in the path of protesters from the Nordic Resistance Movement in Sweden.

Russian-US tycoon boasted of ‘active’ involvement in Trump election campaign A Russian-American businessman who donated a substantial sum to Donald Trump’s 2016 presidential election effort boasted to a senior figure in Moscow that he was “actively involved” in the Republican candidate’s campaign, the Guardian can reveal. Simon Kukes said he was helping Trump with “strategy development” and shared photos of his 29-year-old Russian girlfriend posing with the future president. Kukes made the claims to Vyacheslav Pavlovsky, a career Kremlin official and former ambassador to Norway. Pavlovsky is currently vice-president of Russian Railways. The disclosure raises questions about the role played by Kukes in the run-up to the election and what information, if anything, was being relayed by him to his associates in Russia.

Brexit costing Britain £500m a week and rising, says report Brexit is already costing the public purse £500m a week, new research has found – a stark contrast to the £350m “dividend” promised by the Leave campaign. The Centre for European Reform’s analysis also suggests that the government’s austerity drive would be on the way to completion had Britain voted to stay in the European Union. It shows that the UK economy is already 2.5% smaller than it would have been had Remain won the referendum. Public finances have been dented by £26bn a year, more than half of the defence budget. This translates to a penalty of £500m a week, a figure that is growing.

*Truth, truthiness, triangulation: A news literacy toolkit for a “post-truth” world We were guaranteed a free press, We were not guaranteed a neutral or a true press. We can celebrate the journalistic freedom to publish without interference from the state. We can also celebrate our freedom to share multiple stories through multiple lenses. The Making of the Fox News White House In January, during the longest government shutdown in America’s history, President Donald Trump rode in a motorcade through Hidalgo County, Texas, eventually stopping on a grassy bluff overlooking the Rio Grande. The White House wanted to dramatize what Trump was portraying as a national emergency: the need to build a wall along the Mexican border. The presence of armored vehicles, bales of confiscated marijuana, and federal agents in flak jackets underscored the message. But the photo op dramatized something else about the Administration. After members of the press pool got out of vans and headed over to where the President was about to speak, they noticed that Sean Hannity, the Fox News host, was already on location.

The world's movement of people - in one map With the refugee crisis in Syria, the result of the US presidential election and the Brexit vote, it’s no surprise that the movement of people is such a major talking point. The world is experiencing the biggest displacement of people since the Second World War, with more than 22 million displaced from their home countries. More than 1 million people arrived in Europe in 2015 alone. This map, posted on metrocosm.com and based on estimates from the UN Population Division, gives a remarkable insight into the extent of global migration. It shows the estimated net migration by origin and destination between 2010 and 2015. Was There a Connection Between a Russian Bank and the Trump Campaign? In June, 2016, after news broke that the Democratic National Committee had been hacked, a group of prominent computer scientists went on alert. Reports said that the infiltrators were probably Russian, which suggested to most members of the group that one of the country’s intelligence agencies had been involved. They speculated that if the Russians were hacking the Democrats they must be hacking the Republicans, too. “We thought there was no way in the world the Russians would just attack the Democrats,” one of the computer scientists, who asked to be identified only as Max, told me. The group was small—a handful of scientists, scattered across the country—and politically diverse.