What Is 'negative Reinforcement'? Definition And Real-World Examples 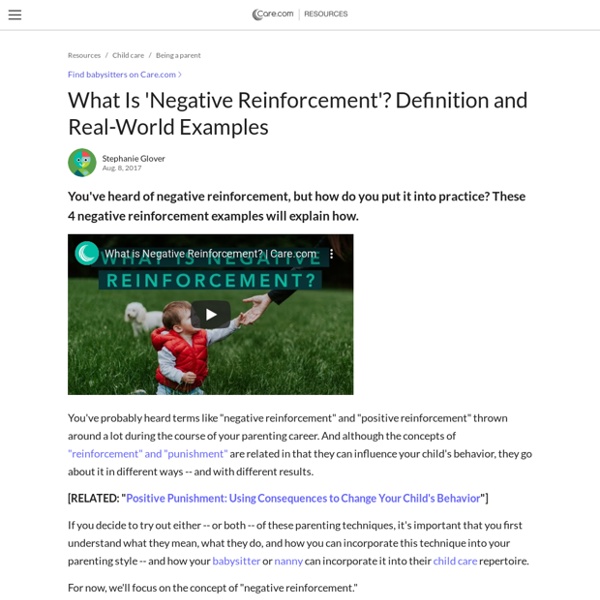 Positive vs Negative Reinforcement: Which Is More Effective? The central premise of Pavlok is getting the user to take action and create a new habit — or change an existing one. To do this, we built “pattern interrupts” — jarring but effective stimuli — into the device that encouraged users to change their routines. We then faced a difficult question that’s challenged behavioral psychologists for decades. Which is more effective for behavior change: Negative or positive reinforcement? Positive reinforcement is a reward for doing something well. What Are the Benefits of Positive Reinforcement in Kids? Reinforcing good behavior while discouraging disobedience and anti-social behavior generally produces positive results in children. Positive reinforcement helps children feel good about their choices, which motivates them to increase the behaviors that bring rewards. Praise and positive reinforcement usually produces both short-term and long-term benefits as children learn helpful habits that will prove beneficial throughout life. Discipline involves teaching and instructing children. While some people use punitive measures or the removal of privileges, positive reinforcement might have fewer long-term consequences and more life-long benefits. In a study published in the 2001 “Journal of Applied Behavior Analysis,” Samantha, a 10-year-old autistic child, consistently chose positive reinforcement when asked to perform certain tasks.

Positive Punishment: What It Is, Benefits, and Examples Positive punishment is a form of behavior modification. In this case, the word “positive” doesn’t refer to something pleasant. Positive punishment is adding something to the mix that will result in an unpleasant consequence. The goal is to decrease the likelihood that the unwanted behavior will happen again in the future. How to Reward Your Teen for Good Behavior Teenagers are young adults who are trying to learn the ways of the world. When they do something great at school or at home or simply make a healthy decision, parents can give them a reward. The reward does not have to be money, but it is a nice way to say "thank you" or "I'm proud of you." Punishing a Child Is Effective If Done Correctly TORONTO — While recently published parenting books have preached the effectiveness of positive parenting and “no drama” discipline, psychologists presenting at the American Psychological Association’s 123rd Annual Convention said don’t put timeout in timeout yet. “Parental discipline and positive parenting techniques are often polarized in popular parenting resources and in parenting research conclusions,” presenter and researcher Robert Larzelere, PhD, of Oklahoma State University, said at a symposium. “But scientifically supported parenting interventions for young defiant children have found that timeouts and other types of assertive tactics can work if they’re administered correctly.”

Positive Punishment: What Is It And How It Works? - MomJunction Positive punishment! Sounds like a perfect oxymoron. But how can a punishment be positive? How can you even enforce such a punishment? Is it effective? 6 Positive Reinforcement Examples To Try With Your Kids ... Positive reinforcement — using praise or rewards to shape your child's behavior — means "focusing on the 'good' things your children are doing or certain behaviors that you like and that you want to see more of," explains Melanie Rudnick, a New York City-based parenting expert and conscious parenting coach. As these positive reinforcement examples will show, and as Dr. Nadja Reilly, a clinical psychologist and the associate director of the Freedman Center for Child and Family Development, explains, it can also be a great tool for communicating to your child the actions or values that you feel are important. Here are some easy examples of how you can use positive reinforcement at home to shape your child's behavior. 1. You're working hard putting away toys!

Negative reinforcement can be used as a parenting technique to encourage good behavior in teenagers by removing an unfavorable stimulus in their lives. A classic example is for parents to nag appropriately and proportionately at their teenage child when they refuse to do their homework. The nagging are likely to negatively reinforce the child's behavior of doing homework so that the negative stimulus of the parents' nagging can be removed. by jonquah Sep 25