Skim reading is the new normal. The effect on society is profound 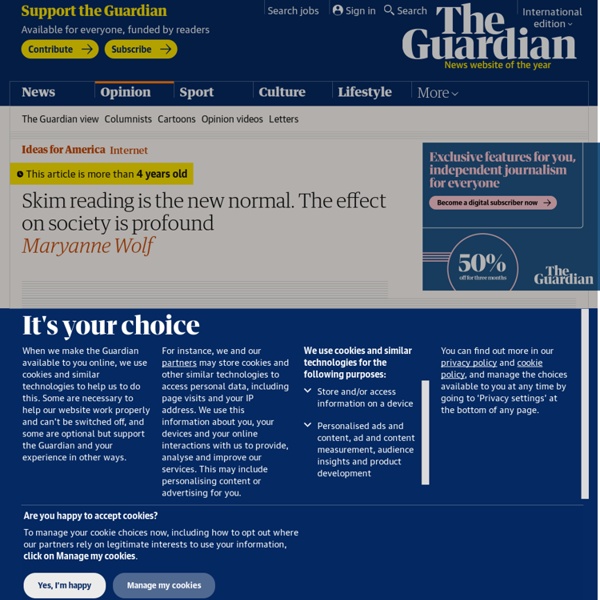 Look around on your next plane trip. The iPad is the new pacifier for babies and toddlers. Younger school-aged children read stories on smartphones; older boys don’t read at all, but hunch over video games. Parents and other passengers read on Kindles or skim a flotilla of email and news feeds. Unbeknownst to most of us, an invisible, game-changing transformation links everyone in this picture: the neuronal circuit that underlies the brain’s ability to read is subtly, rapidly changing - a change with implications for everyone from the pre-reading toddler to the expert adult. As work in neurosciences indicates, the acquisition of literacy necessitated a new circuit in our species’ brain more than 6,000 years ago. This is not a simple, binary issue of print vs digital reading and technological innovation. We know from research that the reading circuit is not given to human beings through a genetic blueprint like vision or language; it needs an environment to develop.

How biased is your news source? You probably won’t agree with this chart Are we even aware of our biases anymore? If you look at this chart and are convinced your “extreme” source belongs in the middle, you just might be part of the problem plaguing America today. “In the past, national evening news programs, local evening news programs, and the front pages of print newspapers were dominated by fact-reporting stories,” says the chart’s creator, patent attorney Vanessa Otero.

Sunday Reflections: YA Literature Too Dark! Why Don’t We Ask the Teens? It’s another day ending in the letter Y, which means yet another article is being written by an adult regarding the darkness of YA literature. Years ago, when there was a large number of these articles, I wrote a post here called “Dear Media, Why Don’t You Let Me Help You Write That Article on YA Literature.” I stand by a lot of that post, but I would add in one very important caveat: Why don’t we ask teens themselves? I’ve written here a lot about how I feel that adults are increasingly taking over a part of the YA market, and I stand by that assertion as well. Don’t get me wrong, I think there is a big difference between YA publishing, the online YA community, and YA librarians. YA publishing is, of course, going to follow the money; they are a profit driven business, so it is no surprise that some of the actors are catering to adults because the research shows that adults are buying YA.

Study: Racial resentment influences appraisals of President Obama's economic performance New research published in the journal Electoral Studies indicates that racial beliefs can lead some Americans to minimize President Barack Obama’s economic accomplishments. “What interested us most was the idea that people construct their own racial reality and they will align their beliefs to fit within this reality. People tend to minimize or ignore information that is inconsistent with their existing racial beliefs,” said study author Darren W. 10 Rules to Read More Books This Year One New Year’s resolution I frequently hear from people is that they want to read more books. Makes sense if you consider reading a key component of personal growth and development. Ray Edwards recently wrote about his reading goals here at MH&Co. He planned to read fifty-two books in a year.

The 11 Best Sites for Finding What Books to Read Next Advertisement Trying to find good books to read during your commute or planning out your summer reading early? There is nothing more daunting than going to a bookstore without a shopping list. So, make sure that your next read is going to be a good one. There are plenty of sites you can use to look up books based on your personal taste, favorite authors and titles, or even based on a specific plot summary or character. 'BlacKkKlansman' Shows How White Supremacists Make Language Into a Weapon The opening scenes of Spike Lee’s new movie, BlacKkKlansman, are in black and white. The movie is a period piece based on the true story of a black man, Ron Stallworth (played in the film by John David Washington), who became the Colorado Springs Police Department’s first black officer in 1972 and then successfully infiltrated the city’s local Ku Klux Klan chapter in an elaborate sting operation. But this black and white imagery is an effect Lee is using to create the illusion of film from an even earlier era. A conspicuously squarely-dressed man named Dr.

Stop Trying To Memorize — A Good Book Will Change You Here’s what happened when I started taking notes Following Ryan’s advice, I started copying paragraphs and quotes I found insightful when I finished each book. It went well for a while. The guilt of “wasted” reading went away and I felt I was building this incredible personal database of knowledge. Then something curious happened. Reading started to feel like a chore.

20 Indispensable High School Reads The specter of World War II, with its themes of totalitarianism, social fragmentation, mass surveillance, and the decline of individual freedom, looms over many of the novels. Dystopian novels form a major category: Orwell’s Animal Farm, William Golding’s allegory The Lord of the Flies, Aldous Huxley’s Brave New World, Kurt Vonnegut’s absurdist comedy Slaughterhouse-Five, Margaret Atwood’s The Handmaid’s Tale, and McCarthy’s The Road join Nineteen Eighty-Four here. Thinking back on my days as a high school English teacher, it feels like I missed an opportunity to teach dystopia as a theme. There's a psychological link between conspiracy theories and creationism Ask a three-year-old why they think it’s raining, and she may say “because the flowers are thirsty”. Her brother might also tell you that trees have leaves to provide shade for people and animals. These are instances of teleological thinking, the idea that things came into being and exist for a purpose.

8 Things I Learned Reading 50 Books A Year For 7 Years I’ve read over 300 books since the beginning of 2011, not counting the many I started but didn’t finish and the endless content we all read online. I’ve read about topics ranging from Buddhism to business, philosophy to physics, and writers ranging from feminists to pick-up artists (and even Trump’s “Art of The Deal.”) I’ve read old books, new books, books with illustrations and fancy charts, a lot of books from which I got nothing and a handful of books I still love. 90% of this was non-fiction. Here’s what I’ve learned in all that reading time — and some of my favorite books from my 20’s. The Ideological Turing Test: How to Be Less Wrong – The Polymath Project Here’s something that took me half a decade to figure out: It is really, really, really hard to be right. If you want to be right all the time, go be an accountant. The rest of us — paleontologists, internet dating specialists, serial entrepreneurs (read: homeless millenials), policymakers, and scholars of Japanese religions — will just have to get used to being wrong. There’s a strange paradox about wrongness: We go about our lives feeling like we’re right, but — in reality — we spend most of our lives being wrong.

Six things you can do to get boys reading more The OECD consistently finds girls perform significantly better than boys in reading. This gap can also be observed across the Australian NAPLAN reading data. Research suggests reading more can improve literacy outcomes across a range of indicators. But girls typically read more frequently than boys, and have a more positive attitude toward reading. Read more: Research shows the importance of parents reading with children – even after children can read