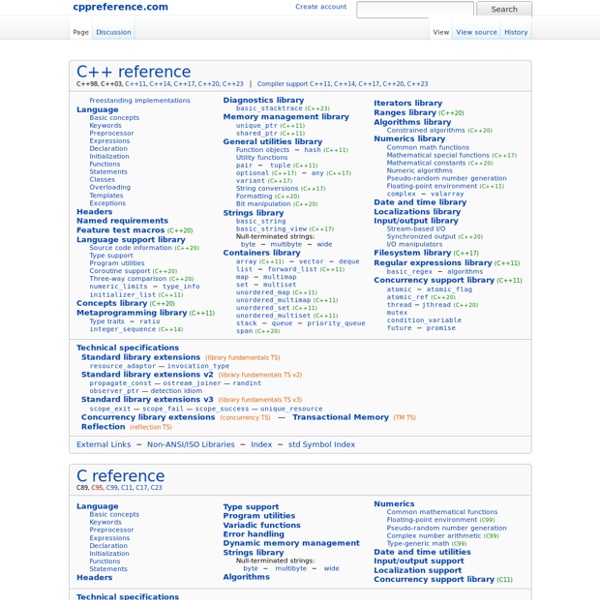 C++ Core Guidelines August 3, 2020 Editors: This is a living document under continuous improvement. Had it been an open-source (code) project, this would have been release 0.8. Copying, use, modification, and creation of derivative works from this project is licensed under an MIT-style license. Contributing to this project requires agreeing to a Contributor License. The Python Tutorial — Python 3.7.2 documentation Python is an easy to learn, powerful programming language. It has efficient high-level data structures and a simple but effective approach to object-oriented programming. Python’s elegant syntax and dynamic typing, together with its interpreted nature, make it an ideal language for scripting and rapid application development in many areas on most platforms. The Python interpreter and the extensive standard library are freely available in source or binary form for all major platforms from the Python Web site, and may be freely distributed. The same site also contains distributions of and pointers to many free third party Python modules, programs and tools, and additional documentation.

C++ Vector Library - push_back() Function - Tutorialspoint Description The C++ function std::vector::push_back() inserts new element at the end of vector and increases size of vector by one. Declaration Following is the declaration for std::vector::push_back() function form std::vector header. void push_back (const value_type& val); void push_back (const value_type& val); void push_back (value_type&& val); Introduction to C++ - C++ F.A.Q. Just getting started? We can help. Contents What is C++? C++ (pronounced “cee plus plus”) is a general-purpose programming language with features found both in very high-level languages and in very low-level languages. Its name is in part a pun on the C increment-by-one operator, reflecting its nature as an evolution of the C programming language.

C++ Vector - live sandbox with starting example Advertisements Hope you have already understood the concept of C++ Template which we have discussed earlier. The C++ STL (Standard Template Library) is a powerful set of C++ template classes to provide general-purpose classes and functions with templates that implement many popular and commonly used algorithms and data structures like vectors, lists, queues, and stacks. At the core of the C++ Standard Template Library are following three well-structured components −

Accelerated C++: Practical Programming by Example Amazon Review If you don't have a lot of time, but you still want to learn the latest in C++, you don't have to learn C first. You might learn more by digging into existing language features and classes from the very beginning. That's the approach offered by Accelerated C++, a text that delves into more advanced C++ features like templates and Standard Template Library (STL) collection classes early on. This book can arguably get a motivated beginning programmer into C++ more quickly than other available tutorials. What separates this title from the rest of the pack is that it jumps right in with samples that take advantage of today's Standard C++, from streams to built-in container classes such as vectors and linked lists.